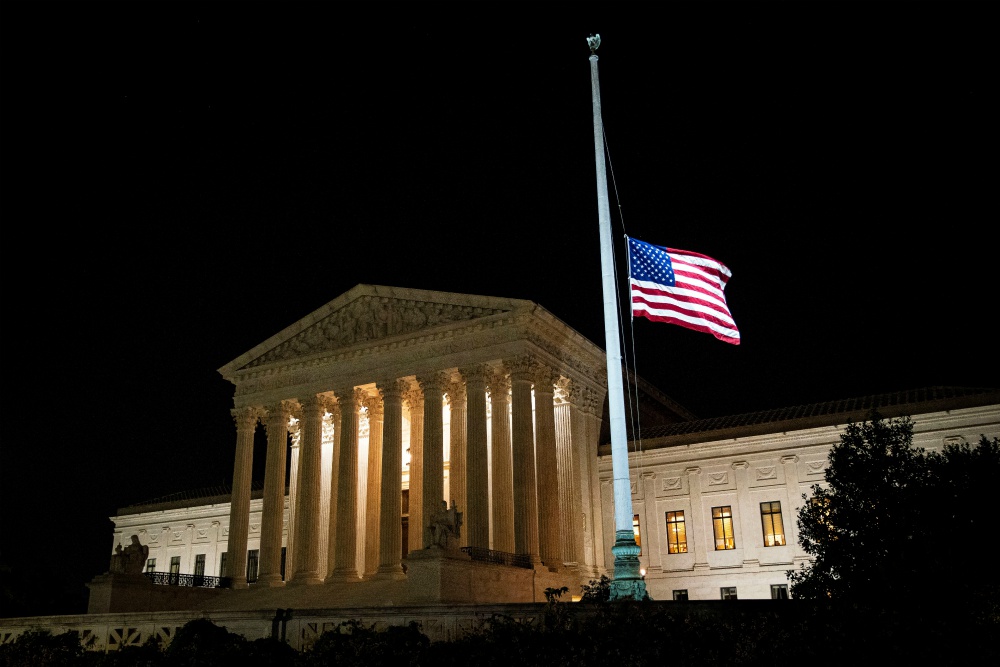 The death of Supreme Court Justice Ruth Bader Ginsburg has a different feel to it from the death of previous justices. In large part because so many women identify with her story of overcoming the hurdles of sexism, and are grateful for her lifelong work removing those hurdles, many of my women friends felt a personal wound in her loss. Others who identify many of the country's ills with the machinations of "the liberal court" had similar feelings when Justice Antonin Scalia died. At a time when politics is so diminished, and the world of ideas so crimped, Ginsburg and Scalia were giants and it seems right that they were such close friends despite their ideological differences.

What impact, if any, will Ginsburg's death have on the election? The short answer is that it helps President Donald Trump. But it is not clear if that help will be significant or not.

The most obvious reason the court vacancy helps Trump is that the country is talking about something other than COVID-19. As the country learned that the president was privately admitting the danger posed by the virus even while he was publicly downplaying it, we were also approaching the horrific milestone of 200,000 dead. Over the weekend, Trump's disapproval rating climbed back over 53% at Five Thirty-Eight.com; the polls had not had time to absorb the news of Ginsburg's death.

The president can claim he did not want to cause panic — broken storefront windows in Portland, Oregon are a reason for panic, he claimed, not the prospect of hundreds of thousands of prematurely deceased fellow citizens! – and so, he claims, he was right to downplay the threat posed, but that line of argument only sets up the easiest of rebuttals from Joe Biden in next week's debate: "Mr. President, you do not have to play it down, or play it up, with the American people. You have to play it straight."

Some commentators are saying that the vacancy will rile up Trump's base. They are pretty riled up already. Any voter whose primary concern is the future direction of the courts, or the abortion issue in particular, had already decided for whom to vote. It is true that conservatives were feeling satiated by Trump's appointments to the court, liberals still felt aggrieved by what happened to Judge Merrick Garland, and anger is more of a motivator for voters than satisfaction.

Still, I would bet that any voter for whom the building up of a conservative majority on the court was a priority was among the 42% of Americans who approve of the job Trump is doing.

The real area where Trump might get a boost is among the 3% to 4% of voters who do not approve of him but still prefer him to Biden, a group I identified last week as critical to the president's reelection hopes. The president's campaign needs to make sure they do not stay home, and while they may not be motivated by the court as an issue, their distaste for Trump may soften as the process unfolds.

When Trump nominated Neil Gorsuch and Brett Kavanaugh to the court, those were among his more presidential moments. Commentators noted that both men would have been on the shortlist for Mitt Romney if he had won the presidency. The country was introduced to a highly intelligent jurist. The pictures in the East Room or the Rose Garden of the nominee with his family were pleasing images.

This time, it will be a woman, perhaps even a Latina, which may further soften the president's image with suburban, moderate voters who have grown tired of his drama but still prefer him to a Democrat.

If Trump nominates Judge Barbara Lagoa from Florida, the pride of her fellow Cuban Americans might give the president a boost in that all-important state. I know that many of my conservative Catholic friends are hoping the president will tap Judge Amy Coney Barrett, but I suspect Trump's political antennae are acute to the fact that many people would be turned off by the weirdness of her involvement with the charismatic group People of Praise. Being mentioned in the same breath as "The Handmaid's Tale" is not a political winner.

If a Catholic is nominated, I hope that Democratic senators will refrain from indulging in anti-Catholic bigotry. Yes, it is bigoted to imply that there is something un-American about holding Catholic beliefs. On the other hand, at a time when some prominent Catholic legal minds like Harvard Law Professor Adrian Vermeule are publishing articles promoting integralism, well, of course senators are entitled to ask some questions.

Finally, I feared the court vacancy would result in abortion becoming a dominant issue in the last few weeks of the election. After Biden carefully kept the word "abortion" from being mentioned during four nights of his convention, the abortion issue would come screaming back. There are no extremists like abortion extremists for shrill intensity, whether they be for or against. Biden's core message — let's get back to some semblance of normalcy, competence and decency — would be overwhelmed by powerful emotions directed at this most neuralgic of issues.

Biden, however, did not take the bait. In a speech Sunday about Ginsburg and the vacancy, delivered at the National Constitution Center in Philadelphia, the candidate focused on the need to protect the Affordable Care Act, which faces a court challenge later this year.

In the middle of the worst global health crisis in living memory, Donald Trump is at the Supreme Court trying to strip health coverage away from tens of millions of families and to strip away the peace of mind from more than 100 million people with preexisting conditions.

If he succeeds, insurers could once again discriminate or drop coverage completely for people living with preexisting conditions like asthma, diabetes, and cancer. And perhaps, most cruelly of all, if Donald Trump has his way, complications from COVID-19, like lung scarring and heart damage, could become the next deniable pre-existing condition.

The death of Ginsburg undoubtedly will serve to raise the temperature of an already overheated election. Beyond that, it is hard to tell. I suspect the impact on the race will be a marginal increase in support for Trump. If 2020 is like 2016, however, margins may matter a lot.