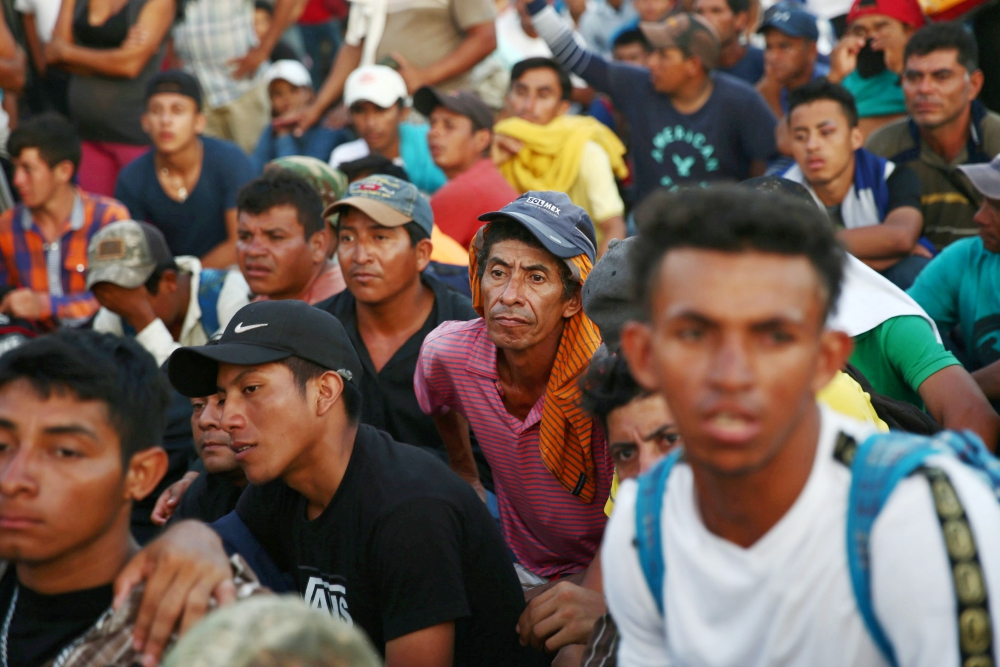 Central American migrants who are part of a caravan trying to reach the U.S. wait on a bridge Oct. 22 in Ciudad Hidalgo, Mexico. (CNS/Reuters/Edgard Garrido)

At Politico, a listing of key facts about the caravan of immigrants trekking through Mexico headed to the United States. It surely doesn't sound like there is much to be afraid of here, but every night this week, Sean Hannity and Laura Ingraham are leading their programs with the story and they make it seem like doomsday is upon us.

According to this report in The New York Times, the Democrats are trouncing the Republicans in one category: small donors. This is less important as a financial matter as the charts indicate: The $46 million raised by small donors for the Dems is only a fraction of the $252 million raised in total. But small donors register enthusiasm. The Republicans, by contrast, only raised $15 million from small donors out of a total of $172 million.

How dangerous is President Donald Trump's decision to withdraw the United States from the landmark Intermediate-Range Nuclear Forces Treaty? At Foreign Policy, Michael Hirsh explains that after 40 years of moving away from nuclear brinksmanship, the withdrawal could put us back on the path toward hair-trigger diplomacy, and this time with China a central player.

Two articles in The Washington Post indicate why the American people are right to be disgusted with our nation's political life. First, a fascinating, and fascinatingly pathetic, account of how the federal government bursts into activity in search of evidence to support Trump's often-fabricated claims. And a professor at San Francisco State thinks that large numbers of college students suffered PTSD in the wake of the 2016 election. This is the kind of thing that gives the cultural left a bad name, and deservedly so. Not sure which is the more horrifying prospect, that this study is bunk or that it is true?

Just when I thought I would never have to play another round of whack-a-mole with Archbishop Carlo Maria Viganò's frenzied imagination, the Vatican's biggest crybaby produces yet another screed. And, true to form, the National Catholic Register holds it up as a fifth Gospel. More on this tomorrow.

At RNS, David Gibson on the Synod of Bishops' struggle over what words to use to describe gay folk. I am on the record supporting the idea that one should always call people by the name they designate for themselves. It is simple respect. Besides, the concern raised by Philadelphia Archbishop Charles Chaput that the term "gay" or the acronym "LGBT" reduces people to their sexual orientation is simply stupid: In other contexts and conversations, gay folk describe themselves as "Italian" or "Catholic" or "overweight." Bigots tend to reduce gay people to their sexuality, not gays themselves. I add Gibson to my list of Americans over there for the synod to whom I offer the challenge to slip 100 euros to the chef at the North American College to make a batch of alphabet soup and only include the letters L, G, B and T, then snap a picture of Chaput when he is served his portion.