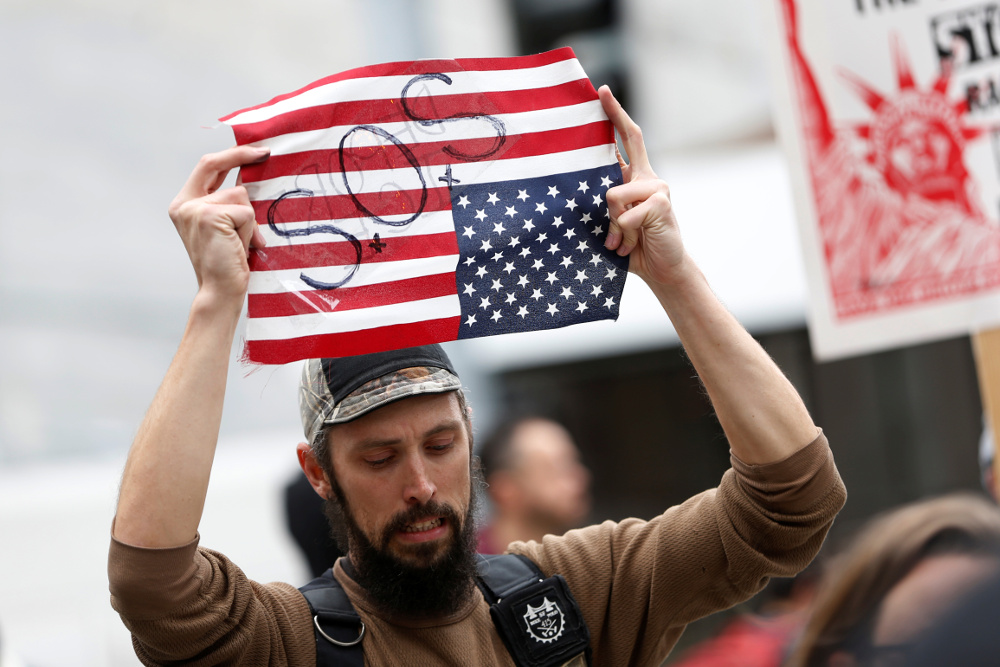 A demonstrator holds an inverted U.S. flag at a rally in late February outside the U.S. Immigration and Customs Enforcement office in San Francisco. The rally denounced raids by ICE to apprehend immigrants in the country without legal status. (CNS/Reuters/Stephen Lam)

The terror is not only at the border. This video, made by our friends in the Retail, Wholesale and Department Store Union, illustrates what happens when ICE raided a meat packing plant in Ohio. Thank God the local Catholic Church was there to do what it could, and the union also, but are these raids something that is worthy of our nation? Where is the regard for the human dignity of these workers?

Marc Short thought he could walk along the well-trod path from a senior White House position to a cushy academic assignment at the University of Virginia. But, in what I hope will be the first of many such protests, conscientious stakeholders at the university are objecting. They do not want any of President Donald Trump's leftovers. "The university should not serve as a waystation for high-level members of an administration that has directly harmed our community and to this day attacks the institutions vital to a free society," stated an online petition opposing the hire. Charlottesville, the scene of the white supremacist rally last year, may be especially touchy on the subject of Trump, but I think all self-respecting institutions should consider refusing to serve as a waystation for anyone who tries to quietly leave the administration. Anyone who publicly denounced the president as a part of their departure should be welcome with open arms.

Meredith Loken, an incoming professor at the University of Massachusetts Amherst, took to the pages of The Washington Post to complain about jokes that Trump and Russian President Vladimir Putin have a romantic relationship, particularly an animated video posted at the New York Times. "The video is deeply homophobic, using the possibility of gay sexuality to belittle both men," she writes. "What's more, it's the product of a journalistic trend that uses gay romance as a metaphor for political weakness and inefficiency." Homophobia? It was funny. Really funny. And, I think the point the video made, and made well, is that there is some kind of non-rational explanation for Trump's behavior towards Putin, that it certainly differs from the way he treats other foreign leaders and it obviously has nothing to do with American interests. Could it be love, which is notoriously blind for gay and straight alike? I invite Loken to come watch reruns of "Will & Grace" with me. They come on at 10 p.m. on weeknights.

Also in The Washington Post, a look at how local news are reporting on the consequences of Trump's trade policies. Put this into the file marked "all politics are local," which is something Trump would not understand.

At Religion News Service, Jacob Lupfer on the Democrats for Life meeting and their attempts to "take our party back." I fear that for the time being, their efforts will come to naught but God bless them for witnessing to the facts that Democrats, as the party of solidarity, should show some solidarity toward the unborn as well as to their mothers.

At The Dialog, Catholic University of America President John Garvey chastises the Canadian Supreme Court for ruling against an evangelical university which discriminates against LGBT students. "Why would a gay student want to attend Trinity Western anyway, and subject himself to an unwelcome constraint, except to play dog in the manger?" Wow. Is that his attitude towards LGBT students at Catholic University? Is being so unwelcoming legal? Moral? Is there any other group of potential students that Garvey would like to bar as being unworthy of his moral compass? I used to think that Garvey was not sinister, he was merely ineffectual. Now I am not so sure.

Speaking of sinister, Fr. Dwight Longenecker insinuated that Cardinal Kevin Farrell is, well, how to characterize this? Here is the tweet: "Farrell is a protege of McCarrick. Farrell promoted James Martin's pro gay book. Connect the dots." Longenecker is a priest of the Diocese of Charleston, South Carolina. He should be made to publicly retract this slander and, what is more, probably be removed from ministry. As one wise friend said of him, "Longenecker keeps switching Christian denominations but never seems to show a genuine interest in Christianity."