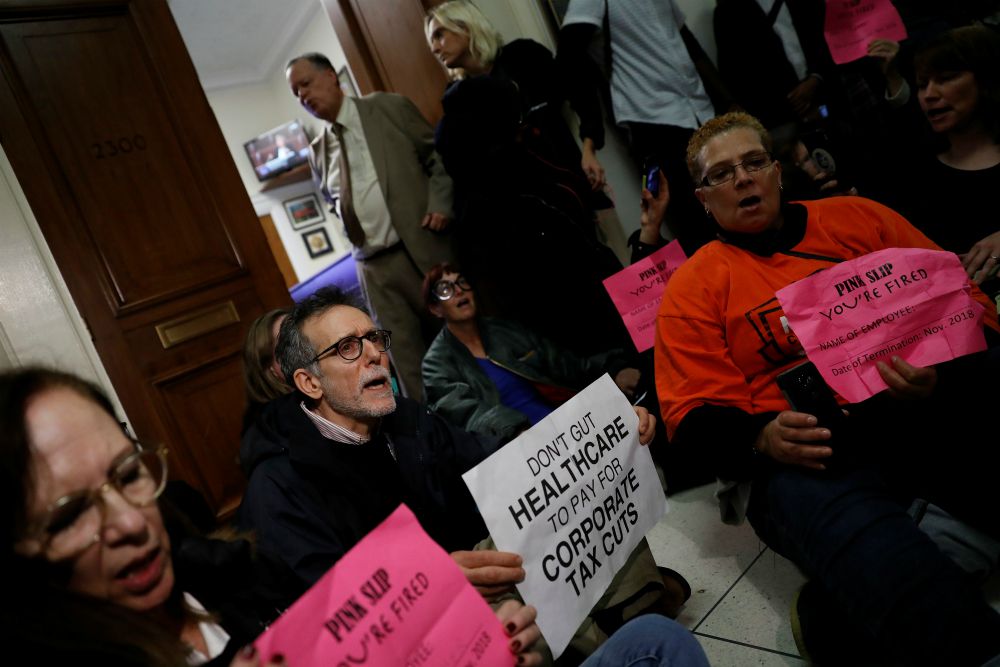 Demonstrators protest against the tax bill outside the office of California U.S. Rep. Dana Rohrabacher, Dec. 5 on Capitol Hill in Washington. The U.S. Conference of Catholic Bishops added its voice to numerous public policy debates throughout 2017 as Congress and the White House offered new plans to govern the nation. (CNS/Reuters/Aaron P. Bernstein)

Looking ahead to the ways religion will impact politics in 2018 mostly makes me depressed. I see little change from what we saw in 2017, specifically, that the religious right will continue to be the face of religion in the public square, and the Christian left will still be unable to get its act together.

Let's start on the right. Fundamentalist Christians constitute the core of Donald Trump's support, so their influence will not be diminished. Trump may thumb his nose at most political traditions, but he has learned one historical lesson very well: Never alienate your base.

Nor is it likely that white evangelicals will up and abandon the president. In a brilliantly argued essay at The Atlantic, Molly Worthen details the historic links between evangelical Christianity and libertarian economic and political ideology. And Worthen points out that there is more to it than ideology. "[H]is authoritarian machismo is right in step with a long evangelical tradition of pastor-overlords who anoint themselves with the power to make their own rules — and, in the event of their own occasional moral lapses, assure their followers that God always forgives." Trump and Joel Osteen share more than a creepy smile.

Who will challenge the dominant position of white evangelicals in the cultural understanding of Christianity? Liberal Protestantism is a shell of its former self. Michael Gerson is an evangelical Christian who has courageously stood up to Trump and criticized the president in specifically religious and moral terms. But Gerson is one man, with a pulpit in The Washington Post.

I wish I could predict that the Christian left is poised to rebound and challenge evangelical Christianity for a share of the religious spotlight. But I can't because they won't. Last week, looking back at the year just finished I wrote:

Very much like their counterparts on the right, I know of no religious organization on the left that is willing to consistently challenge the secular left on any substantive issue, which further diminishes their distinctiveness and force. This is, I fear, a result of the reality of fundraising needs for religiously-themed organizations that do not have extensive mailing lists of small-dollar donors. The amount of time and attention some progressive religious groups have spent on transgender issues is not a function of fidelity to the Christian Gospels. It is a function of satisfying funders.

What is likely to change this dynamic? The left generally — the political left, the academic left, and the religious left — have become either lazy or aloof or dull. Instead of confronting the challenges the election of Trump exposed, they resort to silliness or utterly predictable responses.

Or consider the response of Jon O'Brien, president of Catholics for Choice, when Democratic leader Nancy Pelosi pointed out that the Democratic Party has long welcomed both pro-choice and pro-life members and should not impose a new litmus test in favor of unrestricted abortion rights. O'Brien said, "We are facing a very real threat from within the Democratic Party and from outside to take away the right of women to choose an abortion. It's unacceptable that Pelosi would suggest that you can turn your back on women's moral autonomy and the right to make conscience-based decisions in order to win back a position of power." Is that what Pelosi said? And can O'Brien and his ilk explain why there is no Democratic mayor of Omaha?

Or consider the failure of anyone on the Catholic or Christian left to organize an effective grassroots organization, with members outside the Beltway, capable of influencing politics at the local level? Or the failure of the Catholic left to create the equivalent of the Ethics and Public Policy Center? Or the failure of the Catholic left to challenge, and so distinguish itself from, the secular left and its perspectives and conclusions? Or ask yourself why, so far as I know, precisely no Catholic organization on the left refuses to reimburse employees who avail themselves of union-busting Uber? Or thinks twice about booking at a non-union hotel? How is it possible that the Catholic left, especially, is so moribund when Francis is pope!

In sum, the manner in which religion affects politics is unlikely to change much in 2018. That said, the way politics affects religion, or more precisely, the capacity of religious organizations to resist the influence of politics, this is more promising at least insofar as Catholics are concerned.

I expect the bishops will begin looking to their own history and especially their early history: The battle over trusteeism. In the early 19th century, filled with the democratic spirit of the day, some Catholic congregations claimed for themselves the right that Protestant congregations had, to select their own clergy. The bishops recognized that this amounted to a direct assault on their authority, to say nothing of a profound misunderstanding of sacramental theology, and they fought back decisively and won. By the mid-1820s, trusteeism had been stamped out.

Today, the circumstance is different but the remedy is the same. In the first half of the 20th century, the Catholic Church in the U.S. built up a wealth of institutions, almost all of it paid for by the pennies of the poor. In the latter half of the century, and on into our own, the funds collected on Sunday have not been sufficient to sustain that vast infrastructure, and so bishops (and Catholic university presidents) have become fundraisers. With the best of intentions, they must regularly and necessarily rub elbows with the rich and the famous. They may interact with the working people at the door of the churches they visit, with a few seconds of chit-chat, but bishops — or university president or hospital administrator — don't have workers on their governing boards or make sure there is a representative of organized labor on their advisory councils. And, so, the bishops have become susceptible to the kinds of views the rich espouse, even when such views conflict with the teaching of the Catholic Church. The bishops have become captive to the donor class.

When was the last time you heard a bishop denounce a corporation for the way it treated workers? Or insist that the Catholic organizations within the diocese abide by the church's teaching on the right to organize? No one with whom your average bishop interacts on a regular basis, with whom he has a real conversation or a genuine, long-lasting friendship, knows what it is like to worry about having to live in retirement exclusively on Social Security, or what it is like to live paycheck-to-paycheck, or to lack the money to pay for both food and medicines.

Certainly, the pope gave a clear indication of how he expects the church to live up to its own teaching regarding workers when he vowed to eliminate temporary work at the Vatican. In Europe, where workers enjoy great job security after a certain period of training, some employers try to get around the regulations by hiring temporary workers for short periods of time. It turns out, the Vatican did this too. The pope vowed to end the practice saying, "It's also a problem of conscience for me, because we can't teach the Social Doctrine of the Church and then do these things that aren't right."

I predict that in the year ahead, and precisely as a result of their following the lead of the Holy Father, the U.S. bishops will begin to disentangle themselves from the coterie of rightwing funders who presently exercise so much influence, almost all of it baneful, on the Catholic Church, and about which I wrote last week, as did Tom Roberts. Just as it is now expected that the bishop no longer live in a fancy mansion, I suspect the bishops will begin reclaiming control of the governing boards of their own institutions or at least making sure those boards include working-class folk as well as the super-rich. And, if the lead of the Holy Father is not enough of a prod, ongoing reporting by will continue to look at the ways money distorts the preaching of the Gospel and the practice of the Catholic faith in this country.

This will not be a sudden process. There will be no institutional whiplash. Slowly, but surely, and with an exercise of old-fashioned clerical authority of which I entirely approve, the bishops, or at least many of them, will begin finding creative ways to structure their organizational footprints in ways that do not leave them so beholden to rich folk with an agenda.

We have now looked ahead to 2018 with a view towards what stories to watch in the life of the Catholic Church, in the political life of the nation, and in the estuary where the two collide. One prediction you can count on most assuredly: You will be able to find the best analysis of those stories right here at Distinctly Catholic.