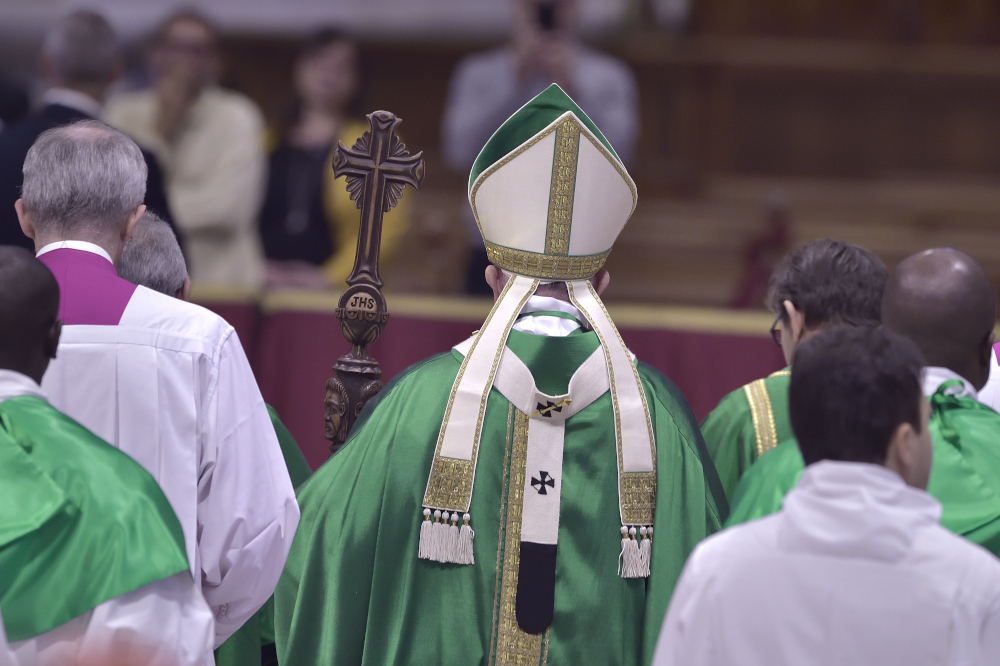 Pope Francis carries his pastoral staff as he arrives in procession to celebrate the concluding Mass of the Synod of Bishops for the Amazon at the Vatican Oct. 27. (CNS/Stefano Spaziani)

First, this conservative idea that all ecclesial doctrine and practice has been fixed from all eternity — and that the Western mode of expressing that doctrine and practice is the only legitimate mode, especially as it was expressed in the 1950s or the pontificate of St. Pope John Paul II — is, to use a technical theological term, hogwash. In the introduction to the Code of Canon Law, promulgated by John Paul II in 1983, we read this:

As is obvious, when the revision of the Code was first announced [by Pope St. John XXIII in 1959], the Council was an event of the future. Moreover, the acts of its magisterium and especially its doctrine on the Church would be decided in the years 1962-1965; however, it is clear to everyone that John XXIII's intuition was very true, and with good reason it must be said that his decision was for the good of the Church in the long term.

The phrase "its doctrine on the Church would be decided" jumps off the page. St. Pope John XXIII had announced his intention to reform canon law, but that could not be done first because there was yet "doctrine … [to] be decided." That is, to use a verb we associate with St. John Henry Newman, doctrine needed to be developed. It is critical for understanding the opposition to Francis to recognize that much of it is based on an understanding of John Paul II that is skewed or worse, indeed a severe lack of knowledge of church history.

It is just as depressing to me, however, to see Catholic liberals viewing change in the church through the same culture war lenses as Catholic conservatives.

The subhead in a New York Times' op-ed by Sara McDougall — "The push to allow married men to serve as priests isn't progress. It's another form of misogyny." — points to the left's problem with synod coverage: The assumption that ecclesial change looks a certain way, and that way is to be akin to modern, Western cultural norms. And it was not just the subhead: McDougall's article contains these sentences:

According to the laws of the Catholic Church, known as canon law, that priests might marry or not is man-made law, therefore mutable, while the exclusion of women is divinely ordained. But the priesthood itself is a man-made invention, an amalgam of Judeo-Roman and other traditions, refined and also only rather belatedly attached to the mass, a ritual performance that re-enacts and celebrates the most important tenets of Catholic faith.

The link is to an NCR article by Gary Macy, a theologian at Santa Clara University. Macy surveys historical developments, and how some of those developments reflected wider developments in the ambient culture, but nowhere does he say that ordination was "a man-made invention." We Catholics believe the Holy Spirit guided the church in the first century, and the eighth century, and the 12th century, just as the Spirit guides her today. There are mistakes in the history of the Catholic Church to be sure. The presence of the Holy Spirit does not vouchsafe everything, but in faith we believe that there are no exclusively "man-made inventions."

To take another example, NCR recently published an editorial on the subject of LGBTQ Catholics. It concluded with these words: "We'll rejoice in the increments, but only with the sober understanding that as long as LGBTQ Catholics are on the margins, and as long as popes can change while church teaching on sexuality in so many areas remains unchanged, there's a lot more work to be done." I do not doubt that more work needs to be done. Our Catholic theology around the subject of homosexuality is woefully inadequate, but I also think a fair reading of the New Testament witness indicates sexual liberation of any kind was not on Jesus' top-10 list. But, what really stalks this editorial is the idea that we liberal Catholics really know the endgame of that theological development and expect the universal church to get on board. How would a significant change in church teaching regarding human sexuality affect ecumenical relations? How would it be received in the global south? These are questions pastors must pose and answer before rushing headlong into an embrace of the norms of Western culture.

I am rereading H. Richard Niebuhr's classic Christ and Culture. I had forgotten how brilliant it is. He considers the school of faith that perceives a "Christ-of-culture," as opposed to a "Christ-against-culture." In his day, the "Christ-of-culture" crowd were liberal mainline Protestants, but whose views track closely with today's liberal Catholics. In one of several devastatingly incisive passages, he writes:

Like their radical counterparts, the Christ-of-culture believers incline to the side of law in dealing with the polarity of law and grace. By obedience to the laws of God and of reason, speculative and practical, men are able, they seem to think, to achieve the high destiny of knowers of the Truth and citizens of the Kingdom. The divine action of grace is ancillary to the human enterprise; and sometimes it seems as if the forgiveness of sins, even prayers of thanksgiving, are all means to an end, and a human end at that.*

As I say, devastatingly incisive.

Pope Francis has offered the church a way to answer the question about change that, I believe, is so important and obvious that we sometimes overlook it, and that is his emphasis on synodality. The Amazon synod entailed extensive consultation before the event. Once convened, the conversations in both the aula and in the small groups were astonishingly frank, I am told. Now, having passed a document, they leave it to the Holy Father to put his authoritative stamp on the deliberations. God so loved the world, he did not send a committee.

God so loved the world, he did not send a committee.

Villanova University theologian Massimo Faggiioli explained to me that the Second Vatican Council discussed collegiality not synodality. Francis is trying to employ synodality as a means of expressing collegiality. "We haven't thought about synodality in centuries," Faggioli pointed out. A synod can be a local or national event. Popes must convoke councils, but not synods. How synodality will develop remains to be seen. But, as a means of discerning how the Spirit is calling the church, I can't imagine a better method. My only worry is that it could provoke powerful centrifugal force, but our teaching on papal primacy can surely act as a centripetal check on anything too rash or wrong.

I sincerely hope the naysayers on both the left and the right will observe what this pope is doing and have confidence that the Spirit is at work in our church. I hope that people who think change is impossible will study some church history. And I hope, too, that those who think ecclesial change is as easy as pie will remember that some of us are not bakers and a pie can be difficult.

Here is a good rule of thumb I use: If you envision Christ in such a way that he always confirms your beliefs and never makes you squirm, you are on the wrong track and you need some spiritual guidance. That works on the personal level. On the ecclesial level, synodality may help keep the church on the right track, whatever that track is and wherever it leads.

*This quote has been corrected from an earlier version.