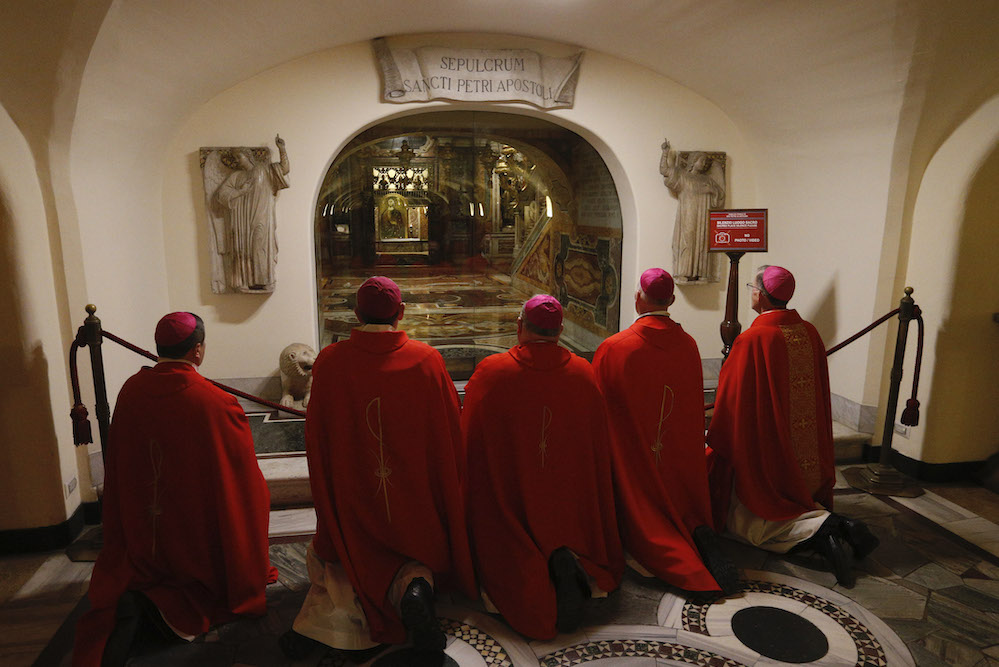 U.S. bishops pray in front of the tomb of St. Peter after concelebrating Mass in the crypt of St. Peter's Basilica at the Vatican Feb. 10, as bishops from Arizona, Colorado, New Mexico, Utah and Wyoming were making their "ad limina" visits to report on the status of their dioceses to Pope Francis and Vatican officials. (CNS/Paul Haring)

The U.S. bishops have now completed their ad limina visits to Rome, to go to the threshold of the tombs of the apostles, and thus renew the apostolicity of the faith. They also seek to renew the unity of the church by meeting with the Successor of Peter and his principal advisors.

At least, that was what used to happen until Francis Derangement Syndrome manifested itself and turned the most recent set of ad limina meetings into an opportunity for some U.S. bishops to use the pope to score political points.

It should be noted, as well, that the conversation with Pope Francis during the ad limina visits were translated conversations. The difference between one article and another is easy to overlook in the same language, but in translation? Yet Naumann ran to the press to report that the pope supported his position, even though you can point to several official teachings by this pope in which he quite clearly aims to set protection of unborn life among other important moral issues, indeed one of several life issues, that make comparable demands on the concern of Catholics. We know Naumann was aware of at least one of those official teachings because it was quoted also in "Faithful Citizenship." After affirming the church's ongoing commitment to the protection of the unborn in Gaudete et Exsultate, the pope said, "Equally sacred, however, are the lives of the poor, those already born, the destitute, the abandoned and the underprivileged, the vulnerable infirm and elderly exposed to covert euthanasia, the victims of human trafficking, new forms of slavery, and every form of rejection."

Last week, "several" bishops spoke anonymously to Catholic News Agency and said Francis had spoken to them about how upset he was regarding his meeting with Jesuit Fr. James Martin. "The Holy Father's disposition was very clear, he was most displeased about the whole subject of Fr. Martin and how their encounter had been used. He was very expressive, both his words and his face — his anger was very clear, he felt he'd been used," one of these anonymous bishops reportedly said. Another anonymous bishop said, "He told us that the matter had been dealt with; that Fr. Martin had been given a 'talking to' and that his superiors had also been spoken to and made the situation perfectly clear to him." He added, "I do not think you will be seeing that picture of him with the pope on his next book cover."

It is shocking that a bishop would try and blacken the reputation of a priest in such a public way. It is beyond shocking that the means to achieve that end would include putting words in the mouth of the pope during a private meeting. How did this strengthen the unity of the church? How did this increase the bishops' communion with the Successor of Peter? And why are these bishops emerging from a private meeting and blabbing about what the pope did or did not say?

It is this last question that is the most frightening. Perhaps they were just trying to do what they accused Martin of doing, manipulating a meeting with the pope to gain tactical advantage. It is commonplace now to observe that in the U.S. Catholic Church, our ecclesial life and theology has been reduced to political categories and analysis. Now, even worse, political tactics are employed. Anything goes so long as you can advance your cause. I will have more on this collapse of our religious ideas and life into politics next week.

I agree with the gist of an editorial posted here at NCR about this matter, but I regret the headline: "The pope is NOT upset with Fr. James Martin." I suspect it is correct, but surely one of the most important lessons from these displays of brutta figura during the ad liminas is this: Why don't we all let the pope speak for himself? That said, the pope needs to be a bit more savvy in his encounters with certain bishops. It is not news to him that since the first synod on the family, the knives have been out in certain conservative circles of the U.S. church. When asked about "preeminence" or about Martin, he surely should have smelled a rat and would have been well advised, and well within his rights, to call the questioners out.

The unity of the Catholic Church is one of her most prominent notes. In the Creed, before we pronounce the church "sanctam" we claim for her the adjective "unam." The Lord Jesus prayed explicitly at the Last Supper, "That all may be one" (John 17:21). That unity is being frittered away, not only by demagogic political activists in this country, like the geo-fencers at CatholicVote.org, but now by bishops, men whose sole claim to our attention rests on the fourth ecclesial adjective in the Creed: "apostolicam." They went to Rome to renew that sense of apostolicity, but their political agendas got in the way. The nuncio might wish to call them in and ask them how they understand being in communion with the Bishop of Rome, and if their answer is as unsatisfactory as these incidents display, perhaps they should be invited to take an early retirement.

*This article has been corrected from an earlier version to state that Archbishop Joseph Naumann is of the Archdiocese of Kansas City, Kansas.