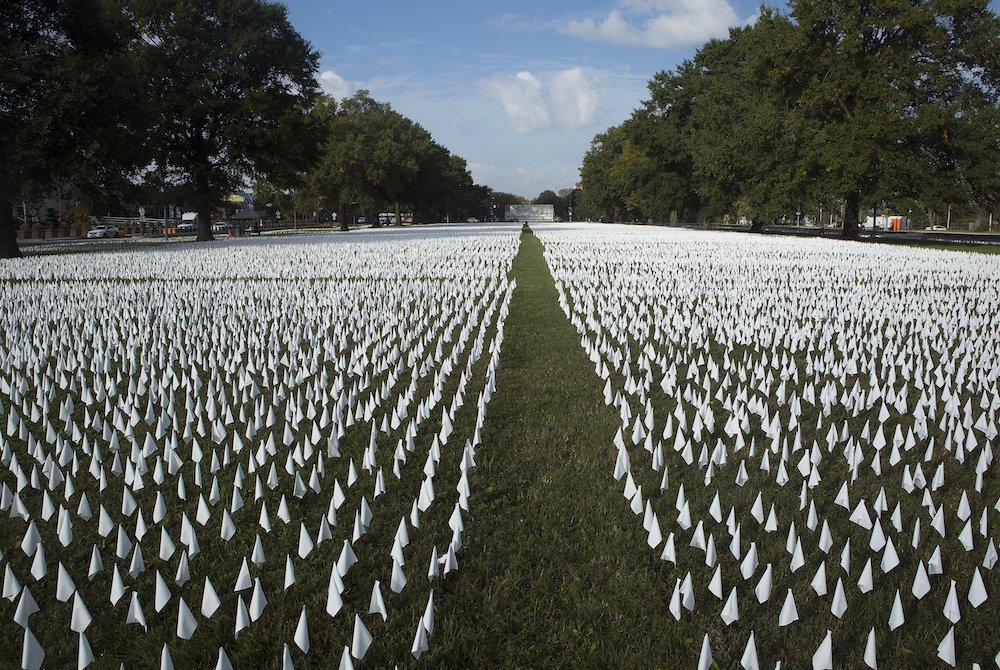 A temporary memorial for the victims of COVID-19 is seen near the armory in Washington Oct. 23. Each day the artist adds new flags to the installation as the death toll rises. As of Oct. 29, about 228,000 Americans have died from the disease. (CNS/Tyler Orsburn)

This election is teaching us all a great deal about our neighbors and their political preferences, about the fragility of our democracy when faced with foreign threats and domestic demagoguery, and about where our democracy is downright sick; for example: the Electoral College.

The election is also teaching us all a great deal about our church and how corrupted our own theology of political life has become.

Catholic social teaching is great for many reasons, not least because it is supple and understands principles are applied, that interests are balanced. It also reflects that greatest of Catholic intellectual tics, its decided preference for "both/and" approaches to complicated questions and rejection of simplistic "either/or" approaches. Sadly, that suppleness has been thrown to the wind by too many men in collars.

Perhaps no incident better encapsulated the substitution of Catholic social teaching for political agitprop than the video recorded by La Crosse, Wisconsin priest Fr. James Altman, in which he said that no Catholic could vote for Joe Biden. The video was endorsed by Bishop Joseph Strickland, the mitered embarrassment in Tyler, Texas.

Another one of Altman's videos got a retweet from Auxiliary Bishop Eduardo Nevares of Phoenix, Arizona. In this video, the priest, whose emotional volatility is palpable, makes a strange claim. He asserts that bishops who teach what the church teaches regarding the role of the lay faithful in determining what their conscience calls them to in the voting booth will be responsible for the blood of babies killed in abortion. Why does this priest still have faculties?

Bishop Thomas Tobin of Providence, Rhode Island, published a tweet that displayed a different problem, denying the possibility that the Mystery is at work in the life of faith: "Biden-Harris. First time in awhile that the Democratic ticket hasn't had a Catholic on it. Sad."

No, bishop. What is sad is when one person, but especially a successor of the apostles, concludes that the operation of divine grace in the soul of another person holds no mysteries (and no access to "the Mystery"), that the soul of another person whom the good bishop likely never met is so easily and dismissively characterized and impugned, that a bishop demeans a man who discusses with some profundity the role his faith played in confronting the horror of untimely death, that such a man can be told he is not a Catholic. That is what is sad.

It is difficult to count the mistakes in this tweet by Bishop Felipe Estevez of Saint Augustine, Florida, but they all reflect lousy moral theology. First, the opposite of a consistent ethic of life is an inconsistent one. Second, there is a hierarchy of truths in moral theology, but it does not necessarily coincide with the hierarchy of truths in political society. Third, how many times do I need to clarify this point: The fact that an evil is intrinsic tells us nothing about its significance for the common good and political life. If I see the bishop at a bishops' conference meeting, I intend to ask if he supports criminalization of masturbation, which is, after all, an intrinsic evil.

If you are beginning to think that anyone in a Roman collar is likely a dolt, fear not. At America, Fr. Lou Cameli published a fine essay explaining that the proper adjective to describe the significance of the abortion issue in Catholic moral theology is not "preeminent" but "foundational." His discussion of how the late Cardinal Joseph Bernardin developed his thinking about the "consistent ethic of life" is highly instructive: Careful, balanced, continually refining the idea, Bernardin and his approach were the exact opposite of the reductionism of the tweeting right-wing bishops noted above.

Cameli, like Bernardin, brings together ideas constructively and feels no need to level personal attacks against any candidate. He has begun the task of pointing us forward to the post-election period in which the U.S. bishops need to finally junk "Faithful Citizenship" and start with a fresh text.

There is plenty of wrongheadedness among the laity too. At EWTN, their voter guide would be laughable in its mistakes except for the fact that these mistakes were likely intentional. The document claims to compare party platforms — except that this year, the Republican Party decided not to issue a new platform.

The EWTN drafters assert they will differentiate between "the non-negotiable moral issues and the negotiable policy issues," but a document about voting necessarily combines moral and policy issues. Nowhere in the teaching of our church will anyone find reference to the category "non-negotiable." The distinction was the creation of political hacks. Pope Francis famously said he "never understood the expression non-negotiable values. Values are values. And that is it."

I would put it this way: None of the church's teaching is "negotiable," and all of it must be applied with prudence to the social, cultural, political and personal arenas of life. As I noted way back in 2012, if you are going to introduce the concept of non-negotiable issues, why are there only five?

And at the EWTN-owned Catholic News Agency, Chad Pecknold, who is a theologian of sorts, confuses political leadership with being a good parent: He said political leaders "should be judged by whether their laws help a society to live in greater accord with virtue." Silly me. I thought advancing the common good was the objective in politics.

This 2020 election is teaching us not only what each party and its supporters are willing to put up with in order to win, it is teaching us who in our church is willing to contort the teachings and witness of the faith to align it with a political program. It is a more sophisticated form of golden calf worship, although I think Strickland gives Aaron a run for his money. But it is still a form of idolatry — which is why it is so pathetic that the very people who champion themselves as the party of orthodoxy in the church have become the most craven apologists for this moral cretin in the White House.

There are those on the left who do some twisting of church teaching, exercise some rationalizations and misunderstand basic theology, too. Today, five days out from the election, mentioning them would suggest, wrongly, that there is a moral equivalence between the two political sides. The president's denial of the threat the pandemic poses, a kind of functional euthanasia policy, defeats any such equivalence. Donald Trump is a unique threat to the values that animate Catholic social thought.