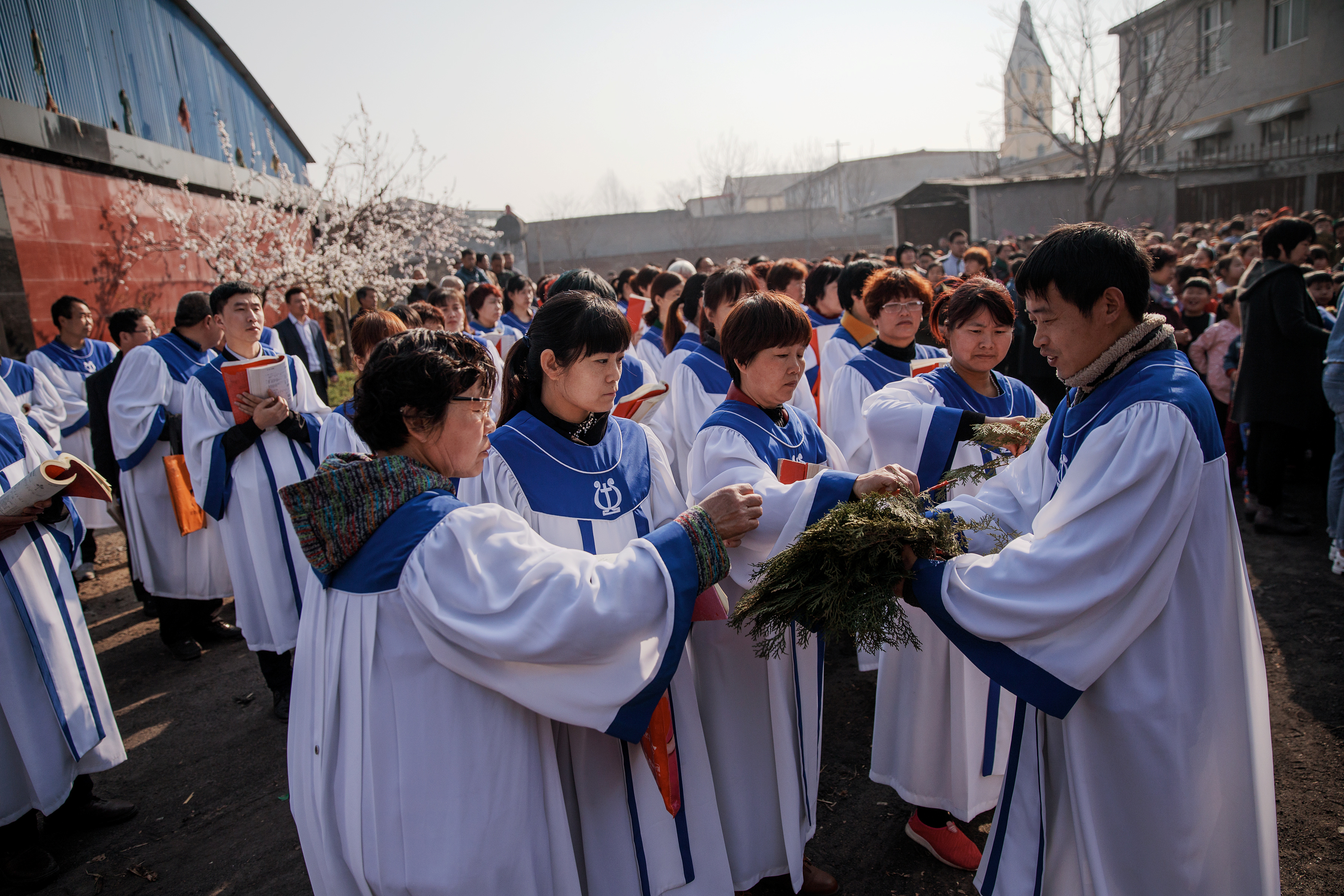 Worshippers prepare for the Palm Sunday procession March 25, 2018, outside a Catholic church in Youtong, China. On Sept. 22, 2018, the Vatican announced that all of the Catholic bishops in China are in full communion with the pope. (CNS photo/Damir Sagolj, Reuters)

Jesuit Fr. Antonio Spadaro has come out with a new book on the Church and China, his second such volume, the fruit of a collaboration between La Civilta Cattolica, which Spadaro edits, and Georgetown University.  I have not received a copy of the book yet, but the preface was written by Vatican Secretary of State Cardinal Pietro Parolin and I have secured an English translation of his text.

There are many interesting aspects to Parolin's preface, but the most striking is the fact that he situates the new book, and indeed the rapprochement between the Holy See and the People's Republic of China itself, in the context of Pope Benedict XV's encyclical on the missions, Maximum illud, issued exactly one hundred years ago. Parolin writes that Benedict was calling forth in his day what Pope Francis would call in our day a "pastoral conversion." Parolin writes:

"Maximum illud reflected above all the great commitment of Benedict XV for peace in the dramatic context of the First World War, which he rightly defined as "useless slaughter." But it was also pervaded by a projection of the global proclamation of the Gospel that recognized the heroism of many missionaries and realistically accepted the limits of the work carried out to bring the Gospel to all, while calling for a return to the spiritual and pastoral sources of the mission to the people, ad gentes."

Pope Benedict XV was very concerned about the nationalistic impulses that had just convulsed Europe, to be sure, but he was also concerned about the way nationalistic ambitions had infected efforts to preach the Gospel, including in China. "[T]he Apostolic Letter contained a strong and clear message: the missions are not an extension of Western Christianity, but the expression of a Church that wants to be truly universal," the cardinal writes.  The Church paid a heavy price, Parolin acknowledges, when its proclamation of the Gospel was made to wear Western attire and approach missionary lands with a colonizing mentality.

Parolin's words are important because so much of the criticism of last year's accord between the People's Republic of China and the Vatican was based on precisely these kinds of political and ecclesial categories. Leading the way was George Weigel, who — surprise, surprise — contrasted the outreach to China with St. Pope John Paul II's way of dealing with communist regimes in Eastern Europe. "A Catholicism that has become identified with a discarded communist regime, because the Vatican once conceded the communists a significant role in the Church's internal life, will be at a grave evangelical disadvantage in the post-communist China of the future, where evangelical Protestants and Mormons will be very, very active," Weigel huffed. "And that evangelical concern, I would respectfully remind Cardinal Parolin, has long been the core of my argument against granting the Chinese communist regime a significant role in the choice of bishops." Do it John Paul II's way or don't do it all is Weigel's perennial mantra. He leveled similar criticism against Pope Benedict XVI after his trip to Cuba.

Another critic of Parolin's policy will not be assuaged. Writing at the National Review last year,  Michael Brendan Dougherty voiced an understandable concern about whether anyone can trust Chinese government authorities. I would have added, or any government authorities.  As the psalmist says: "Put not your trust in princes." But, Dougherty voices a second concern, that of "Sinicization," a Catholic Church in China free from foreign influences. You do not need to know much about Chinese history to understand why this is important to the Chinese. But, as Cardinal Parolin explains, it is also what Pope Benedict XV was talking about regarding the missions: Of course the Church in China and throughout the world must be inculturated.

I am no expert on China, but it seems obvious that no one knows precisely how Chinese society will change in the years ahead, how its political and economic systems will develop, what freedoms will be afforded its people. But, it is foolish to think that just because something worked in eastern Europe it must become the model everywhere. Besides, one of the principal impediments to evangelization in China was the existence of two churches, side by side, one in communion with Rome and the other not. The primary impetus for the Vatican's accord with the government was, in large part, to begin to heal that divide, to "reweave the unity of the Church" in Parolin's felicitous phrase.

This pope has made dialogue a leitmotif of his papacy, and so it should not surprise anyone that he is also committed to dialogue in regards to both healing the divisions within the Chinese Church and proclaiming the Gospel in that country. Dialogue is necessary not least because a universal Church is made up of many local churches where, if it is truly alive, the Gospel is inculturated. The universality of the Church itself makes dialogue normative. Parolin writes that "this universality [of the Church] pushes the Holy See to nurture no distrust or hostility toward any country, but to follow the way of dialogue in order to reduce distances, overcome misunderstandings, and avoid new divisions. The proclamation of the Gospel in China cannot be separated from a stance of respect, esteem, and trust toward the Chinese people and their legitimate state authorities."

Conservative Catholics approach the world in Manichaean terms: There are forces of goodness and light perpetually fighting forces of evil and darkness. The lines are always clear. They tend to forget the Lord's insistence that we love our enemies and pray for our persecutors.

Pope Francis, clearly, does not view the world as the Weigels of the world do. Cardinal Parolin states that the Holy See hopes the accord will "help to overcome the logic of facile opposites, to perceive the real complexity of the cultural, social and religious challenges of China and the world today, and to progressively untie the knots that still impede the joy of fruitful encounter."

I do not pretend to know if the Vatican's accord with China will, one hundred or two hundred years hence, appear to have been a seminal achievement leading to evangelization in that great country, to say nothing of greater collaboration on issues of shared concern such as protecting the environment. Or, perhaps, people will look back and see it as a misstep, something that led to unfortunate consequences. It is not given to any of us to foretell the future. I do know that if it succeeds or fails, it will be on its own terms, not be because it diverged from the geo-political views of American neo-cons or eastern European precedents from the 1980s.

Parolin and the pope he serves are clear that they do not share the rejectionist stance American neo-cons demand. And they are right to be suspicious of advice from people who apologized for the Iraq War, deny the urgency of combating climate change, and have made a career reducing religion to ethics and thence to politics, peddling "the logic of facile opposites."