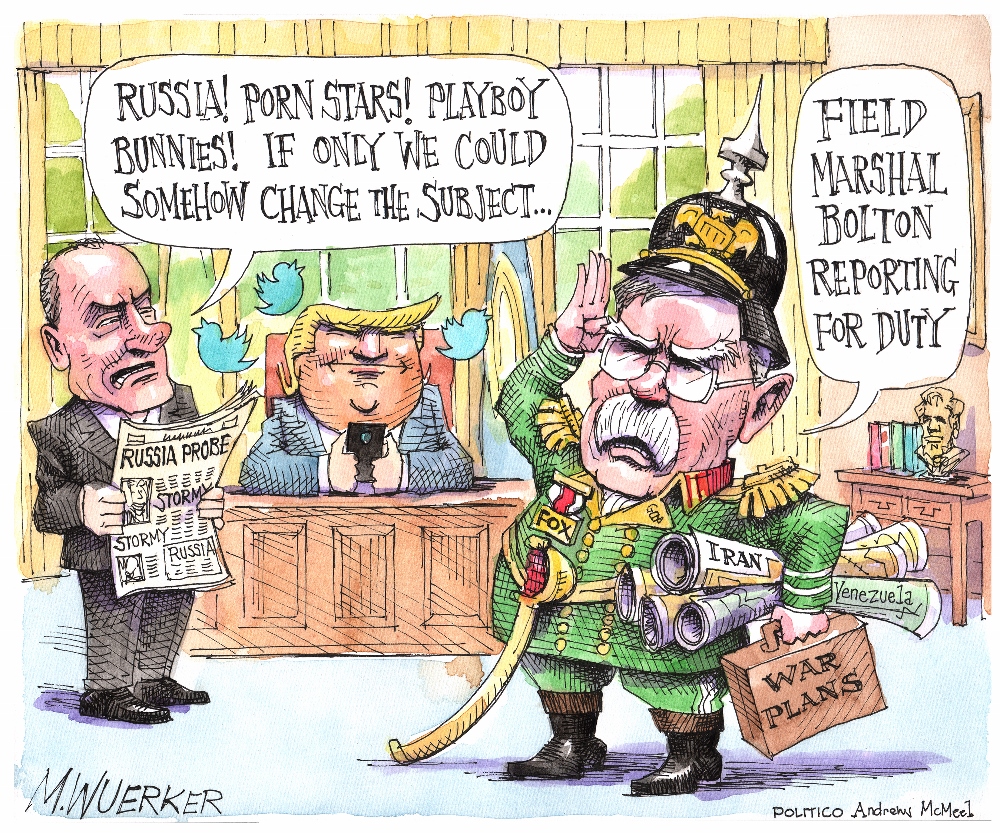 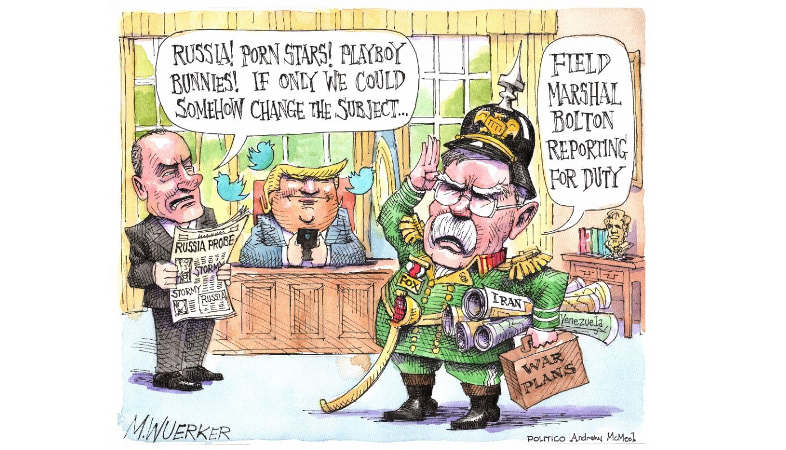 Having John Bolton in the White House scares the hell out of us. "The White House's New Warmonger," reads the headline in the Huffington Post above a report on President Donald Trump's appointment of Bolton as his national security adviser. And then: "For Trump, he's 'a tough cookie.' But for the world, John Bolton is a very dangerous addition to the White House."

Bolton is a creature of the Washington swamp Trump campaigned on draining. He spent a lifetime in the right wing of conservative politics, serving early on as vice president of the American Enterprise Institute and then in midlevel roles in the Reagan and George H.W. Bush administrations.

He hit the big time in the George W. Bush administration. He carried the title of undersecretary of state for arms control, but was in lockstep with former Vice President Dick Cheney and former Secretary of Defense Donald Rumsfeld, fiercely advocating for the Iraq War and manipulating intelligence to build a case for it. One of his most infamous lines from those days was: "We are confident that Saddam Hussein has hidden weapons of mass destruction." We know now this was not true.

He carries the title of "former United Nations ambassador," but it is important to remember his was a recess appointment by the second President Bush because Bolton could not get confirmation from a Republican-controlled Senate. Multiple people testified about Bolton's abusive behavior toward subordinates and retaliation against intelligence professionals who challenged his policy positions.

Bolton lucks out again this time; national security adviser is one of the highest-level White House appointments that does not require Senate confirmation.

He parlayed his bellicose views into high-paying jobs as a political commentator, and from that platform he got Trump's attention. He advocates for a pre-emptive strike against North Korean nuclear weapons and is on record calling talks with North Korea as worthless. He has also called for bombing Iran and will argue that the United States should withdraw from the nuclear agreement with Iran by a May deadline. At Vox.com, Zack Beauchamp writes, "American foreign policy may be soon be shaped by someone who seems to truly believe that war is the answer to the world's most pressing problems."

Beauchamp also reports that Bolton and Mike Pompeo, Trump's pick to be the next secretary of state, have "deep and extensive ties to an organized group of anti-Muslim writers and activists ... members of the so-called 'counter-jihad' movement." In short, Bolton has already done much to damage U.S. foreign policy standing.

What is truly scary, however, is that with Lt. Gen. H.R. McMaster leaving the national security office, Rex Tillerson leaving the State Department and the other recent high-level departures, gone are the "adults in the room" who were, to quote Michele Goldberg in The New York Times, "checking Donald Trump's worst instincts and most erratic whims." We've watched Trump make disparaging tweets about North Korean leader Kim Jong Un and make snap judgments on issues like an embassy in Jerusalem or steel and aluminum tariffs, proof that Trump has no real concrete policy objectives or guiding principles. He acts on impulse and often according to the last person he heard on television or with whom he had a conversation.

Going forward, that "last person" is going to be tough-cookie Bolton, and that is very scary indeed.

A version of this story appeared in the April 6-19, 2018 print issue under the headline: Bolton in the White House is scary indeed.