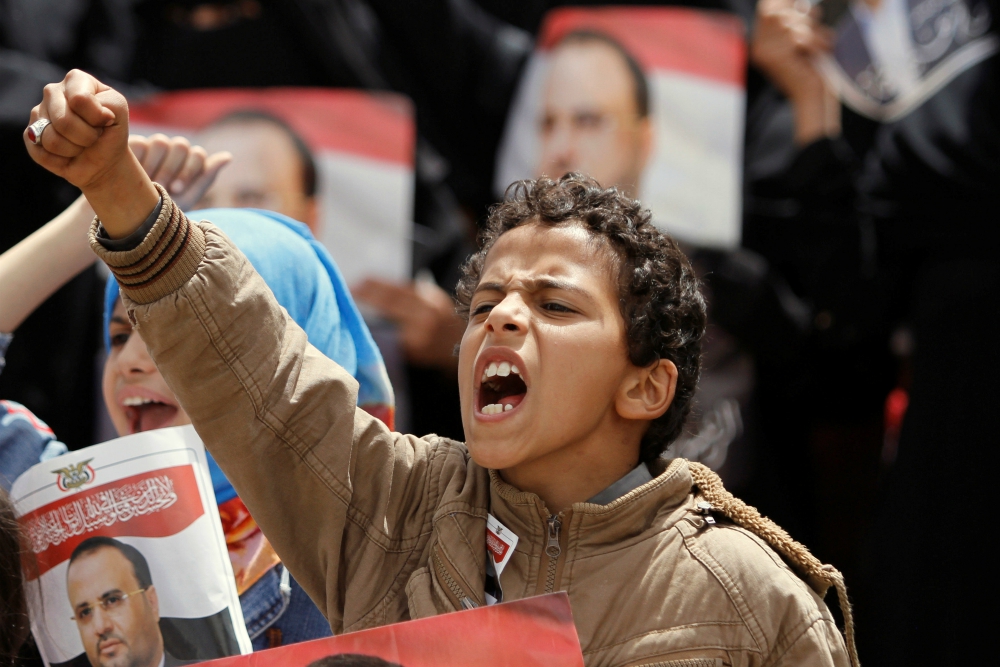 A boy shouts during a protest in Sanaa, Yemen, April 26. Catholic and other faith-based aid groups are urging an end to fighting in Yemen, where three years of war have created a humanitarian crisis. (CNS/Reuters/Mohamed al-Sayaghi)

In Yemen, a quarter of a million people at risk

The city, which is currently under rebel control, is considered a lifeline for the country's war-ravaged population. Ninety percent of food, fuel and medicines consumed in Yemen is imported. Some 70 percent of those supplies -- including humantarian aid for the whole country -- goes through Hodeidah, according to the UN.

The New York Times reported that nine U.S. Senate Republicans and Democrats wrote to Defense Secretary Jim Mattis and Secretary of State Mike Pompeo, expressing "grave alarm" that the impending offensive would worsen the humanitarian crisis in the country.

The reasons for the grave alarm are clear from the headlines coming from Yemen:

Below is NCR's edtiorial on the crisis in Yemen from May 30.

At an international gathering in April meant to raise humanitarian aid for Yemen, U.N. Secretary-General António Guterres declared: "Yemen is the world's worst humanitarian crisis." That's quite a statement given the competition for that title: Rohingya refugees straddling the border of Myanmar and Bangladesh; Syria's ceaseless, senseless war; and South Sudanese flooding into East African neighbors and looking toward Europe.

Guterres made a pretty good case.

The April gathering secured more than $2 billion in aid for Yemen for 2018. Just under $1 billion came from the kingdom of Saudi Arabia and the United Arab Emirates. The United States and Britain pledged $237 million and $87 million, respectively.

How's this for a dilemma: The largest donors to the international humanitarian relief effort in Yemen are also the largest contributors of the armed conflict that has reduced this nation on the Arabian Peninsula to smoldering ruins.

Since 2015, Yemen has been ground zero in a scorched-earth proxy war between a Western-backed Saudi and UAE coalition and an Iranian-backed Yemeni rebel group Ansar Allah, also known as the Houthis. According to the U.N. Office for the Coordination of Humanitarian Affairs, at least 9,000 people have died in the last three years, though other estimates place the toll much higher. More than 6,100 causalities are civilians, and a quarter are children, the U.N. says.

Airstrikes, which include the use of cluster bombs, by the Saudi and UAE coalition caused 61 percent of the recorded civilian casualties, according to the U.N., with indiscriminate Houthi shelling and sniper fire in densely populated areas "accounting for much of the remainder." The Houthis have launched missiles toward populated areas in Saudi Arabia, resulting in two deaths in March and April.

The relief organization Médecins Sans Frontières issued a report May 18 that said, "In the past three years, the coalition has carried out 16,749 air raids in Yemen, i.e., an average of 15 a day. Almost a third of the raids have hit non-military sites." U.S. armed forces, meanwhile, assist the Saudi-UAE coalition with aerial targeting, intelligence sharing and mid-flight aerial refueling.

Arguing that shipments through Houthi-controlled Yemeni ports include caches of weapons from Iran going to the rebel group, at the end of 2017 the Saudi and UAE coalition blocked all Yemeni land, air and sea ports. Some restrictions have been eased, but the coalition has continued to impede aid and commercial imports and has kept Yemen's main airport closed since August 2016.

The latest report on Yemen by the U.S. Agency for International Development said that at the end of April, the coalition was blocking entry of 11 vessels carrying 117,000 metric tons of food. The Houthis, too, obstruct the distribution of humanitarian assistance and prevented humanitarian access. A U.N. panel of experts called the ongoing blockade of humanitarian and commercial goods "essentially using the threat of starvation as a bargaining tool and an instrument of war."

The U.N. special envoy to Yemen, the veteran British diplomat Martin Griffiths, has pledged to present the U.N. Security Council with a framework for peace by the end of June. He said "a political solution to end this war is indeed available" but also warned that military escalation could "in a single stroke take peace off the table."

International players have shown little interest in peace for Yemen. In recent months, Germany, Belgium and Norway stopped arms sales to warring parties in Yemen, but France and Britain have renewed pledges of support to the Saudi and UAE coalition. In March, the U.S. State Department announced a $1 billion defense deal with Saudi Arabia that includes parts and maintenance support for Saudi tanks and helicopters and the sale of 6,700 anti-tank missiles.

The humanitarian crisis in Yemen is totally man-made. It could be contained and a peace process put in motion. The problem is that the nations that could stop the crisis won't.