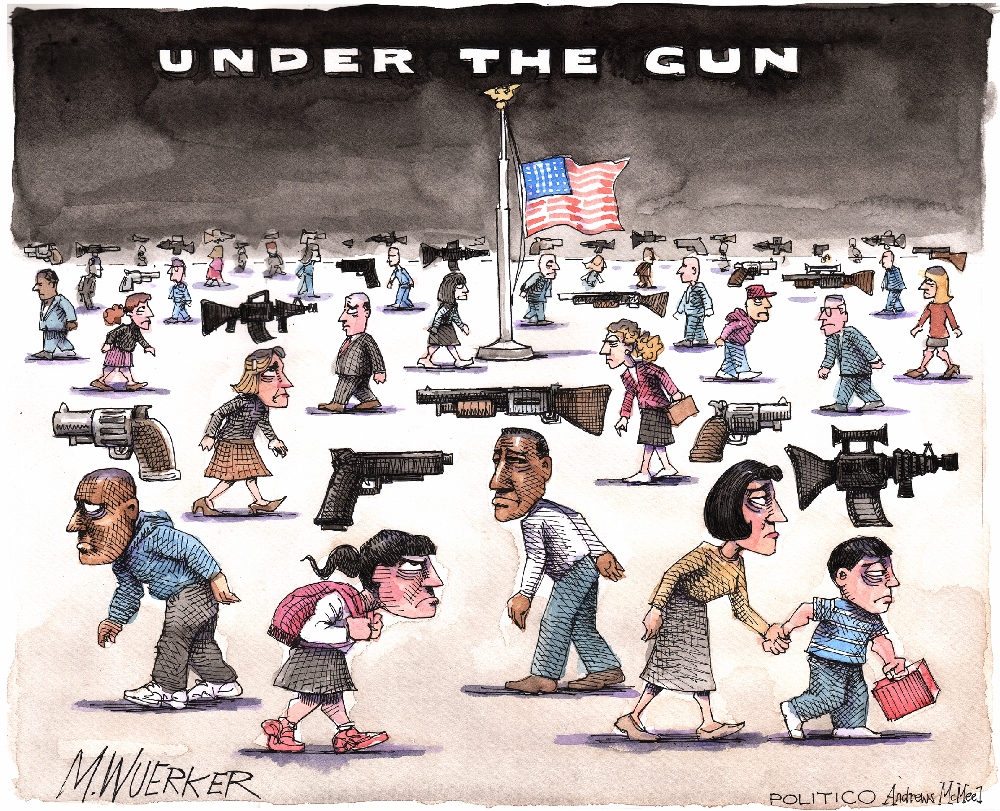 The day after a gunman mowed down hundreds of people in Las Vegas, Archbishop Michael Jackels of Dubuque, Iowa, posted a message to his diocese. "Our faith inspires us to offer condolences," he wrote. He offered "prayers for the happy repose of the souls" and called for respect for life and for common good.

And then, in an abrupt needle-scraping-across-the-album moment, he simply wrote "Jesus, mercy" and ended with this parenthetical: "This is substantially the same statement as last year after the Orlando shooting. I figured: why write something new; nothing of substance has changed in the area of gun control. And that is I think yet another level to the sadness of Sunday's tragedy."

Many of us thought the slaughter of Connecticut schoolchildren, just weeks before Christmas five years ago, was gut-wrenching enough to inspire lawmakers to enact some legal reins on the gun culture that is destroying the freedom to enjoy life for Americans across the country. It did not. In the end, it was more important for lawmakers to protect their careers from the wrath of the National Rifle Association than to protect all of us from random acts of violence.

This time, with 58 people dead and almost 500 injured — making the event in Las Vegas the most deadly single shooting in modern U.S. history — President Donald Trump and supporters of the right to own any kind of gun, no matter how powerful or how unsuitable for any activity other than mass destruction, said that "now is not the time" to bring up the issue of gun control.

If now is not the time, then when is the time?

We do not know what drove the Las Vegas shooter to plan such an unimaginable act of violence. But we do know how he did it. We know he stocked his suite at the Mandalay Hotel with at least 23 weapons and accompanying ammunition. We know he chose guns with enough power to kill a large number of human beings from a window 32 stories above them. And we know he bought his weapons legally.

Now is the time. Now. Thirteen years after lawmakers allowed a 10-year-old ban on so-called assault weapons to expire, now is the time. That ban did not limit Americans' ability to own guns for hunting or even handguns for purposes of self-defense. What it did do was prohibit private citizens from buying 18 models of semi-automatic guns. The law was far from simple, and gun sellers and buyers found ways around it. That's going to happen. Take, for instance, the legal drinking age. Teenagers find ways to buy alcohol, but we don't let those laws just fade away.

For decades, the U.S. Catholic bishops have stood against the easy ability to buy deadly weapons, especially high-powered guns such as those used in the Las Vegas killings. In a 1994 pastoral message, "Confronting the Culture of Violence: A Catholic Framework for Action," the bishops outlined action steps for the church and its people, including advocacy for laws that restrict "dangerous weapons."

"The Catholic community is in a position to respond to violence and the threat of violence in our society with new commitment and creativity," the message said. "More of the same is not sufficient."

Six years later, they issued another document, "Responsibility, Rehabilitation, and Restoration: A Catholic Perspective on Crime and Criminal Justice," in which they specifically supported laws that "control the sale and use of firearms and make them safer."

After the 2012 shooting at Sandy Hook Elementary School in Newtown, Connecticut, they came out in force, calling for "reasonable regulations of firearms," including "universal background checks for all gun purchases" and a limit on "civilian access to high-capacity weapons and ammunition magazines." They reiterated that message in written testimony to a Senate committee considering legislation in the aftermath of Sandy Hook.

We are, therefore, baffled by the statement issued Oct. 2 under the name of Cardinal Daniel DiNardo, president of the U.S. Conference of Catholic Bishops.

"In the end, the only response is to do good — for no matter what the darkness, it will never overcome the light. May the Lord of all gentleness surround all those who are suffering from this evil, and for those who have been killed we pray, eternal rest grant unto them, O Lord, and let perpetual light shine upon them."

Where was the call for restrictions on gun sales this time? October is Respect Life Month. Common-sense regulation of gun sales and ownership is an issue of life, and now is the time for U.S. Catholics — bishops, priests, women religious and all the rest of us — to fight against the culture of gun violence that pervades our nation.

We call on the bishops to use their national and state conferences to lobby for legislation that goes beyond small NRA-acceptable restrictions and acknowledges and addresses the public health threat posed by high-capacity, military-style weaponry. We call on Catholics to embrace the sentiment behind the social-media hashtag #enough and to demand real and courageous action by their representatives in Congress and in state capitols. And we call on all Americans to support political candidates who dare to make gun control a key issue in their campaigns.

Now. Not next time. Now.