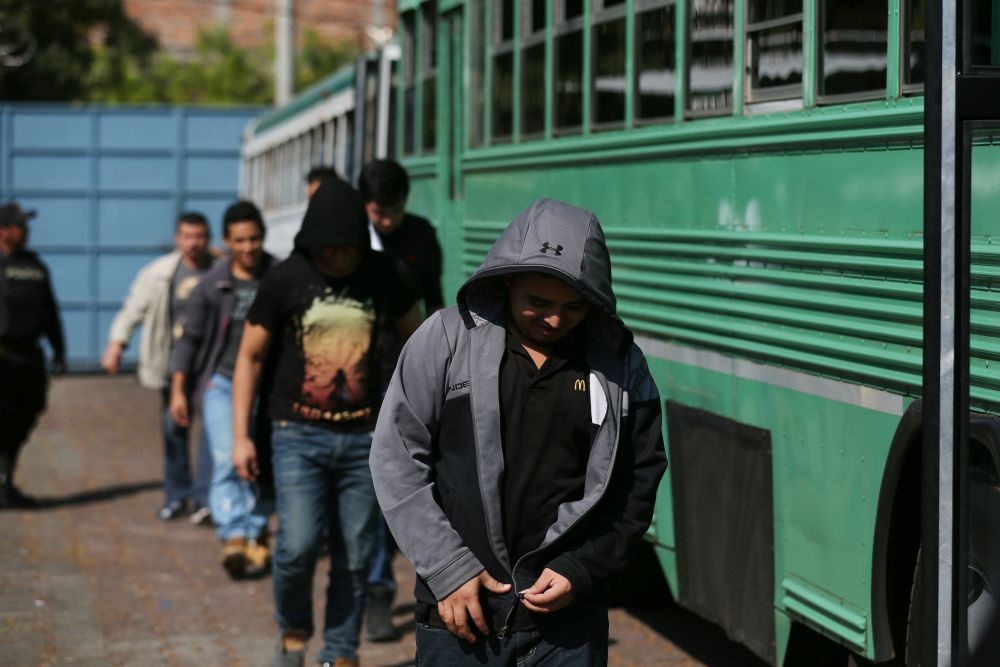 Deportees get off a bus at an immigration facility Jan. 11 after a flight arrived in San Salvador, El Salvador, with immigrants who were in the U.S. without documents. U.N. officials said Jan. 12 that U.S. President Donald Trump's reported use of an expletive to describe El Salvador and other countries could "potentially damage and disrupt the lives of many people." (CNS/Reuters/Jose Cabezas)

On Jan. 8, addressing diplomats assigned to the Vatican, Pope Francis explained again in no uncertain terms our moral obligation to welcome and protect migrants and refugees. He challenged these national representatives about political rhetoric used against migrants "only for the sake of stirring up primal fears." Francis told them to "abandon the familiar rhetoric and start from the essential consideration that we are dealing, above all, with persons."

That same day, in Washington, the Trump administration announced that it would not renew the temporary protected status of some 200,000 migrants from El Salvador, which they've had since 2001 when their country was devastated by an earthquake. The Salvadorans are the latest national group to lose the status. Haitians, Nicaraguans and Sudanese have lost their status in recent weeks. A half dozen other nationalities including Hondurans and Yemenis are under threat of losing their status and face deportation.

Ending TPS is only one attack on migrants the administration is pursuing. President Donald Trump is threatening to allow the protections afforded by the Deferred Action for Childhood Arrivals, or DACA, program, to lapse. The program, which protects from deportation up to 800,000 young people who were brought to the United States as children, has become a political bargaining chip.

The prospect of mass deportations — the stuff of totalitarian regimes — is very real. Think about that. Let those images linger in your mind. 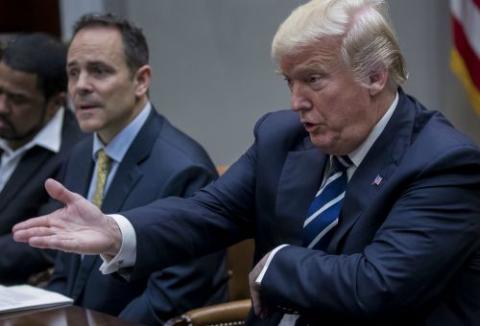 President Donald Trump gestures during a meeting on immigration with a bipartisan group of House and Senate members at the White House Jan. 9. (CNS/EPA/Shawn Thew)

Trump and his staff routinely demonize immigrants. He was elected on "stirring up primal fears" and won't abandon that tactic now. Thursday, Trump's racism was again on public display in a meeting with U.S. senators trying to hammer out a deal on DACA. Why should we extend protection to people from Haiti and Africa, Trump demanded; "Why are we having all these people from shithole countries come here?" he asked. Such repulsive disregard for other nations, cultures and human beings cannot go unchallenged, and we cannot allow it to be explained away.

Anyone who calls themself Catholic must stop making excuses for the president. High-profile Catholics in media and politics should no longer tolerate the vicious, nativist punditry of Fox News' Laura Ingraham or the bigotry of Sean Hannity. These attitudes must especially be challenged when they appear in Catholic media.

Anti-immigrant rhetoric is featured in the "Terry and Jesse Show," formerly of Relevant Radio. Raymond Arroyo has repeatedly hosted anti-immigrant activists on his EWTN talk show. The host of the network's nightly news program, Lauren Ashburn, routinely refers to undocumented workers as "illegal immigrants." When Jason Calvi hosted that show over the holidays, he discussed with Alfonso Aguilar, president of the Latino Partnership for Conservative Principles, what Republicans call "chain migration." Neither man pointed out that the correct phrase for this immigration policy is "family reunification." This last point is especially noteworthy because EWTN prides itself on being a pro-family network. They are "stirring up primal fears" and must be told to stop.

This week marks National Migration Week of the U.S. Conference of Catholic Bishops, an issue that mostly unites the bishops. It was odd that the kick-off statement from conference president Cardinal Daniel DiNardo made no reference to the need for legislative action. The chair of the Committee on Migration, Bishop Joe Vasquez, said he was "deeply disappointed" by the administration's TPS decision when "deeply outraged" is what is called for.

Four years ago, Cardinal Sean O'Malley and eight fellow bishops celebrated Mass at the border in Nogales, Arizona. The image of the cardinal and Bishop Gerald Kicanas distributing Holy Communion through the slats in the border fence summed up in one image the church's position on immigration: The bonds of communion are stronger than the borders of nations.

That a nation of immigrants is in danger of turning its back on the immigrants of today is bad enough. That some Catholics participate in that effort is shameful. We hope that all Catholics will follow the lead of the pope, find their voice, speak out against the prospect of mass deportation and, most importantly, vote out of office anyone who supports the president's draconian proposals. We shall all stand before the judgment seat of God, but members of Congress stand before the judgment of the voters in November. Our immigrant brothers and sisters should not have to wait for the eschaton to achieve justice.