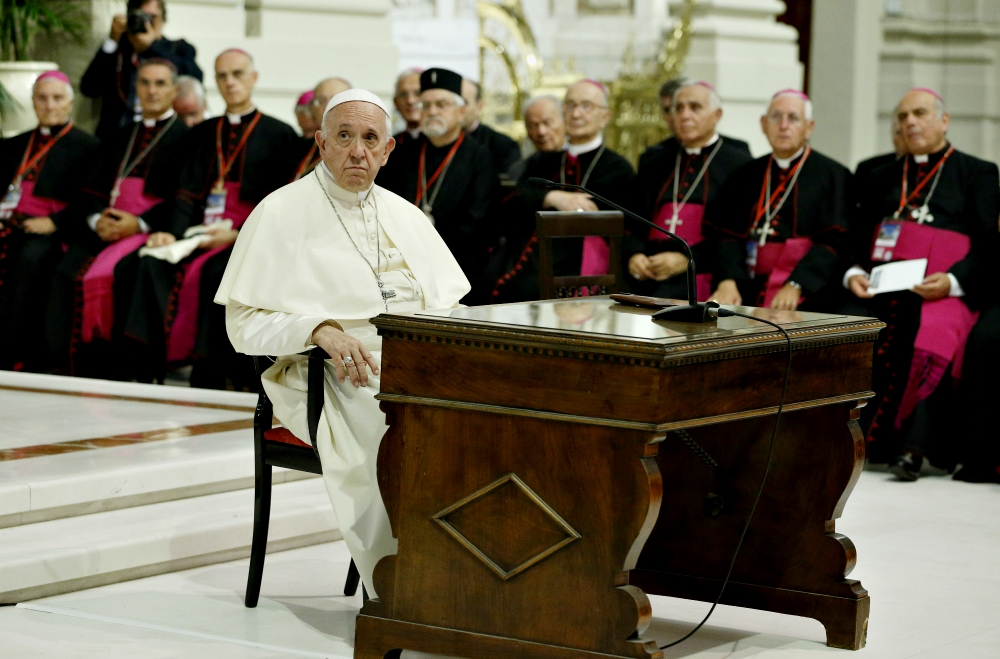 Pope Francis leads a meeting with priests, seminarians and religious at the cathedral in Palermo, Sicily, Sept. 15. (CNS/Paul Haring)

The pope who once famously said about gay priests, "Who am I to judge?", is judging again.

In a newly published, book-length interview, Pope Francis has reasserted his worries about the presence of gay men in the clergy and of gays and lesbians in consecrated life.

His statement is a response to this question, posed by the interviewer, Claretian Fr. Fernando Prado: "It is not a secret that in consecrated life and in the clergy there are also people with homosexual tendencies. What can you say about that?"

Francis offers a response that is rather meandering, and even muddled in some parts. He claims that homosexuality is "fashionable" in some societies and that this "mentality also influences the life of the Church."

He recounts a story about a bishop who was "shocked" to realize that in his very large diocese there were "several homosexual priests." The bishop, Francis says, "intervened, first of all, in the matter of formation in order to form a different type of clergy."

But the heart of the confusion and controversy about Francis' latest statement surrounds his story about a male religious who realizes some of his students and professed religious were gay. The male religious decided that "it is definitely not that serious ... it is only an expression of affection."

It remains unclear whether these gay seminarians and religious were breaking their vows of celibacy. Were they were actually expressing their homosexuality through affection, or does the male religious view homosexuality generally as an "expression of affection"? Either way, Francis doesn't like it. He condemns this view as "wrong."

A number of progressive Catholics have rushed to Francis' defense. Some argue that he is only opposed to priests and religious who break their vows of celibacy. Others insist that he did not include heterosexuals in his condemnation of celibacy-breakers because the interviewer's question was specifically about gay priests and gay and lesbian religious.

But to apologize for Francis in these ways is to deny what he has said previously about homosexuality and about admitting gay men to the priesthood.

In December 2016, Francis signed a rather homophobic document called "The Gift of the Priestly Vocation."

That document quoted a 2005 instruction signed by Pope Benedict XVI that said, "The Church, while profoundly respecting the persons in question, cannot admit to the seminary or to holy orders those who practice homosexuality, present deep-seated homosexual tendencies or support the so-called 'gay culture.' "

This statement clarifies Francis' obtuse words in his recent interview. It states clearly that even if a priest is not breaking his vow of celibacy, if his "homosexual tendencies" are "deep-seated," he loses his chance to be a priest.

In May 2018, Francis also weighed in on the issue during a closed session with the Italian Episcopal Conference. As La Stampa reported, Francis expressed his concern about admitting seminarians with deep-rooted homosexual tendencies, telling the clergymen, "If you have even the slightest doubt, it is better not to let them in." 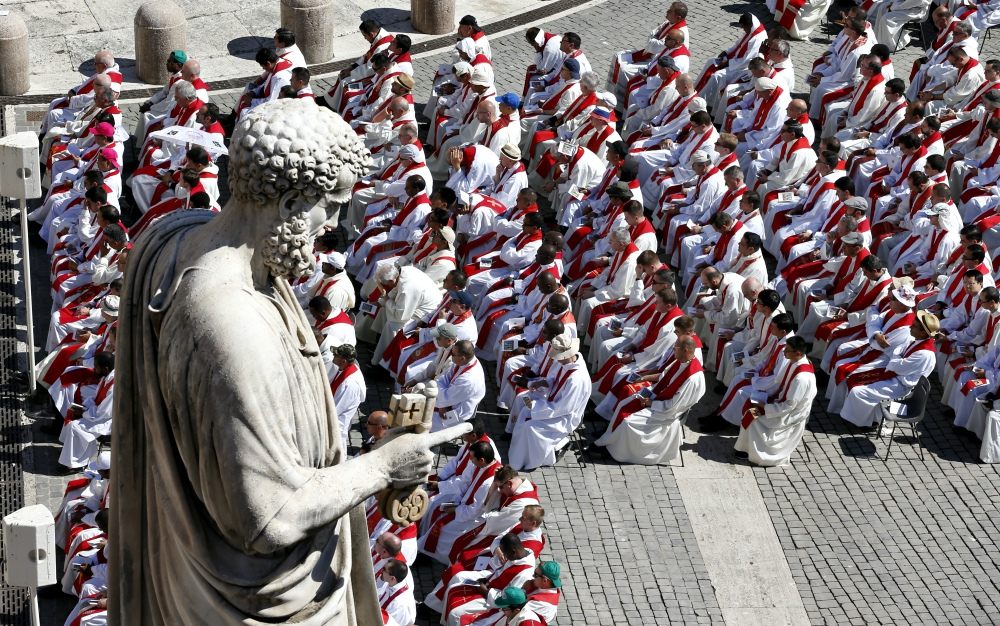 Priests sit below the statue of St. Peter as Pope Francis celebrates Mass marking the feast of Sts. Peter and Paul in St. Peter's Square at the Vatican June 29. (CNS/Paul Haring)

But what precisely is a "deep-seated homosexual tendency"?

The phrase seems to have first been used in the 2005 document, called "Instruction Concerning the Criteria for the Discernment of Vocations with regard to Persons with Homosexual Tendencies in view of their Admission to the Seminary and to Holy Orders."

The instruction doesn't define precisely what deep-seated homosexual tendencies are, but does declare that they are "objectively disordered" and "often constitute a trial."

Transitory tendencies, on the other hand, are inclinations that either go away or can be overcome, "for example, that of an adolescence not yet superseded.

"Nevertheless," the instruction continues, "such tendencies must be clearly overcome at least three years before ordination to the diaconate."

This notion of "transitory tendencies" should worry all of us who are troubled by the harm done to many young LGBTQ people through reparative therapy programs, such as the one featured in the new film "Boy Erased."

Francis has alluded to transitory homosexual tendencies in the past, perhaps most shockingly during the papal plane ride home from Dublin last August. In comments that were later redacted in the official Vatican transcript, but reported by The Guardian, the pope seemed to suggest that homosexual tendencies could be treated if they surfaced during childhood.

"When it shows itself from childhood, there is a lot that can be done through psychiatry, to see how things are. It is something else if it shows itself after 20 years," he said when asked by a journalist what he would say to parents who observed homosexual traits in their children.

The only research I could find on these so-called deep-seated and transitory tendencies was a paper titled "The Distinction between Deep-Seated Homosexual Tendencies and Transitory Same-Sex Attractions in Candidates for Seminary and Religious Life." Written by Peter Kleponis, Ph.D., and Richard Fitzgibbons, M.D., it was published in 2011 in The Linacre Quarterly, the official journal of the Catholic Medical Association.

The intention of the paper was to offer research that supports the Vatican's 2005 instruction banning gay priests.

According to the website MaritalHealing.com, Kleponis participates in evaluating candidates for priesthood and religious life and has given conferences to Courage, a Catholic organization that treats homosexuality like an addiction.

Fitzgibbons has been an adjunct professor at the Pontifical John Paul II Institute for Studies on Marriage and Family at the Catholic University of America in Washington, D.C. In 2008, Benedict XVI appointed him a consultor to the Vatican's Congregation for the Clergy, a position he no longer holds, according to the latest Vatican yearbook.

According to Kleponis and Fitzgibbons:

Those with deep-seated homosexual tendencies often identify themselves as "gay men" which is based to a large extent upon their sexual attractions. They often reject the current scientific findings that there is no genetic or biological basis for SSA [same-sex attraction] and believe they were born this way. They do not view homosexuality as a disordered inclination, are comfortable with their sexual attractions, subscribe to the increasingly prevalent belief that homosexuality is a normal variation in human sexuality, and think there is nothing wrong with homosexual acts. Their beliefs make them highly vulnerable to sexual acting out.

And what do the doctors believe are the causes of these deep-seated homosexual tendencies? They explain:

Men with deep-seated homosexual tendencies are usually unwilling to examine the possibility that they experienced emotional conflicts in significant male relationships that result in same-sex attraction. When asked, they are often unable to name a best male friend in elementary school. Their strong physical attraction to other men's bodies and to the masculinity of others is the result of profound weakness in male confidence, a craving for male acceptance, and a poor body image. They have a significant affective immaturity with excessive anger and jealousy toward males who are not homosexual. Their insecurity leads them to avoid close friendships with other men who do not have SSA.

The paper later goes on to argue that gay men have significantly higher incidences of cancer and psychiatric illness.

And as for transitory same-sex attraction, Kleponis and Fitzgibbons "deem it preferable to the use of the terms 'ego-dystonic' homosexuality or 'obligatory' or 'optional' homosexuality because it implies the ability to change," they write.

Is this the kind of junk science that Francis, the bishops, seminary rectors, and members of the Congregation for the Doctrine of the Faith are relying on to support the barring of gay men from ordained ministry and gays and lesbians from consecrated life? Is this the "research" that is keeping all LGBTQ people from enjoying the fullness of life in their church?

Francis' words in this interview and the teaching contained in "The Gift of the Priestly Vocation" seem to suggest so.

To Francis' credit, he does not associate homosexuality with clerical sex abuse. But some of the ideas he expresses in this new book are still quite damaging.

The pope says that gays who are already ordained and lesbians and gays who are in consecrated life must "be exquisitely responsible, trying not to scandalize their communities or the holy and faithful People of God by living a double life."

Francis' words paint a portrait of gays and lesbians as those who will always struggle to remain celibate and who always run a high risk of causing a scandal. That he holds them to a special standard of sinless perfection suggests that he not only sees homosexuality as deviant, he also sees gays and lesbians as somehow powerless against their sexual desires and highly vulnerable to acting out sexually.

The fact that Francis returns to this issue so frequently suggests it is one of his top concerns. The question is why? And why doesn't he fret nearly so much about heterosexual priests breaking their vows of celibacy?

Many Vatican insiders predict that at next year's Synod of Bishops, Francis may attempt to relax the celibacy requirement. He has said more than once that the celibacy rule is changeable. Is the pope's preoccupation with the celibacy requirement for gay priests his way of shoring up this rule, should the time come that there will no longer be mandatory celibacy? Is he afraid that, when that day comes, gay priests will feel as entitled to sexual love as straight priests?

Regardless of his motivations, Francis' characterizations of gays and lesbians and his notion of "deep-seated homosexual tendencies" will only foster the toxic homophobic attitudes that are already so prevalent in seminaries and religious communities, as well as in the wider church. In his attempt to discuss "the strength of a vocation," he has only weakened what little hope LGBTQ Catholics still have for his pontificate.

A version of this story appeared in the Jan 11-24, 2019 print issue under the headline: Exclusion from vowed life.