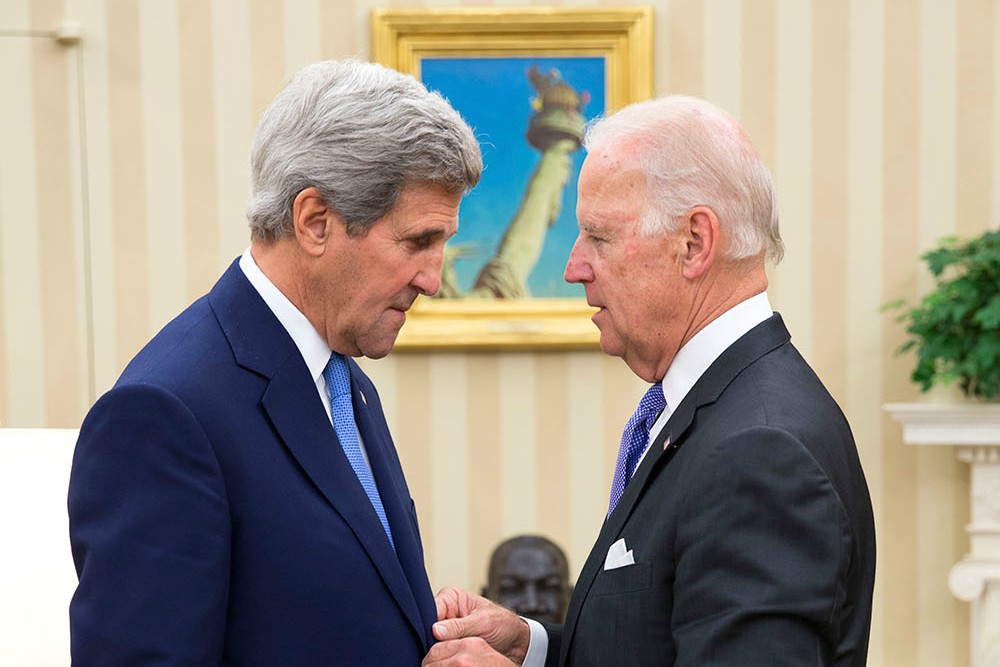 At a recent press conference, Joe Biden was asked about Donald Trump's instruction to his supporters that they commit a felony by voting twice: once by mail, and again in person at the polls. Before responding, Biden made the sign of the cross: an outward expression of his Roman Catholic faith and, in this case, an unspoken self-admonition to temper his response.

Biden's Catholic faith is essential to his persona. It was formed in Scranton, Pennsylvania, where Sunday Mass attendance was obligatory. Although a subsequent move to Claymont, Delaware, because his father lost his job was disruptive, the Biden family's Catholic faith remained intact.

As a teenager, Biden attended a local Catholic high school where he earned his tuition by painting the school's iron fence, pulling weeds from the garden, and washing the school's 200 windows with vinegar and water before drying them with newspapers.

As a young man, Biden left a prestigious law firm to become a public defender, helping those who could not afford legal assistance.

Biden has linked his entire public service to his faith: "Scripture is clear: It's not enough to just wish the world were better. It's our duty to make it so."

Joe Biden's faith has been tested by unspeakable tragedies. His wife and daughter were killed in an automobile accident just weeks after he was first elected to the Senate. Decades later, his son, Beau, died of an inoperable brain tumor. Jill Biden writes that when Beau died: "Joe drew from his deep Roman Catholic faith. It's a big part of who he is."

On the campaign trail, Biden likes to quote Kierkegaard — "Faith sees best in the dark" — while promising to "restore the soul of America." Biden's Catholicism is unshakable, and on the campaign trail he carries Beau's rosary, attends Mass regularly, speaks comfortably about his faith, and counts many religious among his close friends.

Being a practicing Roman Catholic is not tangential to Biden, it's essential to understanding who he is. As his Senate successor, Chris Coons, observes, "For Joe, faith isn't a prop or political tool."

Biden's openness is quite different from the last Roman Catholic nominated for the presidency, John Kerry. Like Biden, Kerry is a Democrat and practicing Roman Catholic who attends Mass regularly. As a child, Kerry served as an altar boy and seriously considered entering the priesthood.

As a soldier in Vietnam, Kerry's faith was strengthened when he came face to face with his own mortality, winning a Bronze Star for valor. Reflecting on his service, Kerry remembered: "I wore a rosary every day of battle. I know what faith is."

After the war, Kerry married another devout Catholic, Teresa Heinz Kerry. And as the Democratic party's 2004 presidential nominee, Kerry carried with him a St. Christopher medal, rosary and a list of Scripture readings wherever he went.

But, like so many New Englanders, Kerry kept his faith mostly private. As one top Kerry adviser noted, "I grew up in the same background as a Roman Catholic in New England, and we all have a tradition where faith is practiced inside your religion and it's more of a private matter."

That tradition is a long-standing one, and candidates who overtly tout their religiosity are often given a cool reception. In 1976, born-again Baptist Jimmy Carter fared poorly in New England, losing Connecticut, New Hampshire, Vermont and Maine to the more reserved Episcopalian Gerald Ford.

Thanks to Kerry's reticence to publicly discuss his Catholicism, only 7% of voters in 2004 described him as a "man of strong religious faith." This was a sharp contrast to George W. Bush, whose "compassionate conservative" and faith-based initiatives were accompanied by a personal story that centered upon a life-changing encounter with television evangelist Billy Graham.

Another reason for Kerry's reticence was the explosive issue of abortion. His pro-choice views sparked an immediate public outcry from the U.S. bishops. In 2004, they adopted a resolution stating that politicians who support abortion rights were "cooperating in evil," adding that no "honors, awards, or platforms" should be given to those who oppose church teachings on this issue. Catholic prelates in New Jersey, Missouri, Nebraska and Colorado went even further, forbidding Kerry from receiving Communion should he attend Mass in their dioceses. Colorado Springs Bishop Michael Sheridan opined that any Catholic who supported Kerry was jeopardizing his or her eternal salvation.

These statements had an impact. On Election Day, Kerry lost the Catholic vote to Methodist George W. Bush, 47% to 52%.

Political campaigns are akin to riding a roller coaster. Candidates are often pummeled by events largely out of their control. But one thing they do control is their personal narrative.

On the other hand, Biden's faith is an essential part of his campaign's narrative. His convention featured prominent faith leaders, including Social Service Sr. Simone Campbell and Jesuit Fr. James Martin. Just before Biden's acceptance speech, the Democratic conclave offered a Catholic Mass celebrated via Zoom.

Thus, Biden and Kerry, two Catholics from the same political party and the same faith, have chosen very different paths when it comes to how their campaigns message their faith and what it says about each of them. The differences could not be more stark.

That said, the Biden approach has a key advantage. An August 2020 survey found Trump beating Biden among white Catholics, 59% to 40%. However, Biden was also receiving 65% backing from Hispanic Catholics. Good politics isn't avoiding constituencies where a candidate is weak. Instead, the first rule of politics is to take a weakness and transform it into a strength.

This is particularly true when it comes to religion. Beginning in 2000 and ever since, both parties have encountered a religion problem. Voters who attend church regularly (whatever their denomination) have cast their lot with the Republican Party, whereas infrequent attendees vote Democratic. In 2016, 53% of weekly churchgoers (or more) sided with Donald Trump, while 54% who attended church just a few times a year (or never) supported Hillary Clinton.

Republicans must do better among those who are infrequent church attendees (a growing proportion of the electorate). But Trump has done little to bridge that gap. Instead he is relying on his mostly white Catholic supporters to renew his White House lease once again.

But for churchgoing Catholics, whether they be white, Hispanic, African American or some other race, their faith matters. Biden's willingness to make it a central part of his story differs from recent Democratic nominees who often downplayed their religious roots. While Biden's Catholicism is essential to who he is, making it part of his campaign narrative is also smart politics.

[John Kenneth White is a professor of politics at the Catholic University of America and the author of What Happened to the Republican Party? He is a national co-chair of Catholics for Biden.]