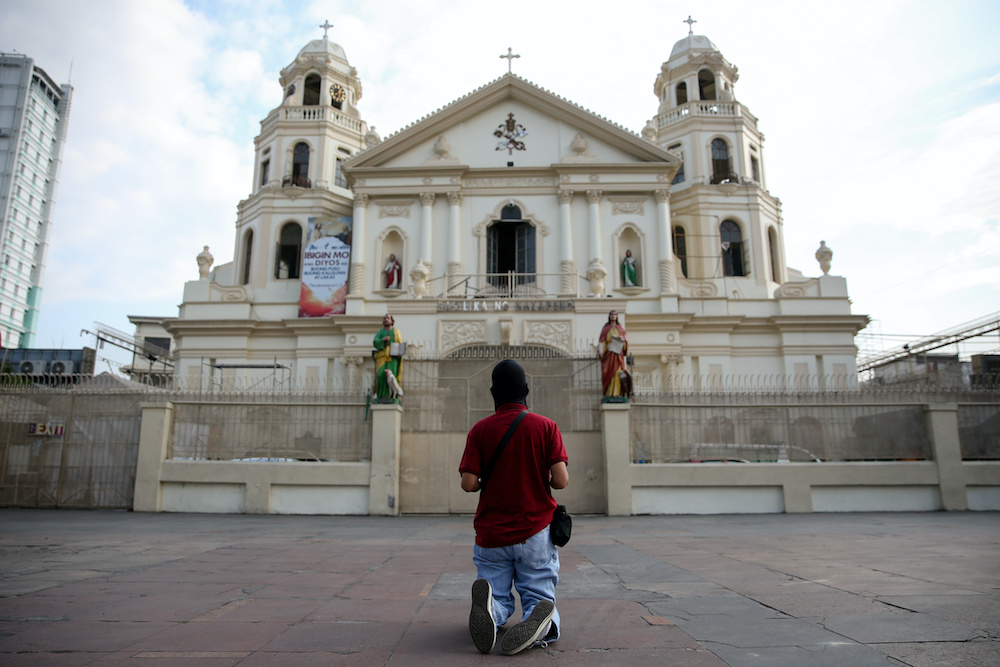 A person kneels in prayer outside a closed church during the coronavirus pandemic in Manila, Philippines, April 9. (CNS/Reuters/Eloisa Lopez)

It is already a truism just three months into the coronavirus pandemic to say that the world will not be the same again. It has taken a global pandemic to signal that the Roman Catholic Church hasn't a prayer of returning to many of its outmoded practices. Institutional Catholic theology states that in extremis (Canon 850) anyone can validly and licitly baptize. Given that the world is in extremis, it follows that similar changes can take place in other areas of church life, and they are.

Pope Francis' surreal Urbi et Orbi blessing was a clear swan song to a bygone era. Perfectly intelligent people, including educated Catholics, asked me what a plenary indulgence is and what you would do with one if you received it. That is a good question in a grave health and economic crisis; most people are not focused immediately on how long they will serve in purgatory. Good heavens!

The sight of the pontiff carrying a monstrance in an empty St. Peter's Square was a stark reminder that the last one out should turn off the lights. While it is likely that he and his Vatican advisors had the best of intentions, the visual was abysmal, more morbid — or, as one television commentator described it, "ghostly" — than hopeful.

Catholics who have been calling for structural change from a hierarchical church to vibrant faith communities have been wanting to flatten the curve without knowing the epidemiological meaning of the term. The top-down model fell that night in the Vatican when the hierarchy was once again, and in a profound way, inadequate to the pastoral needs of its people who needed comfort that the 13th-century ritual just did not provide. 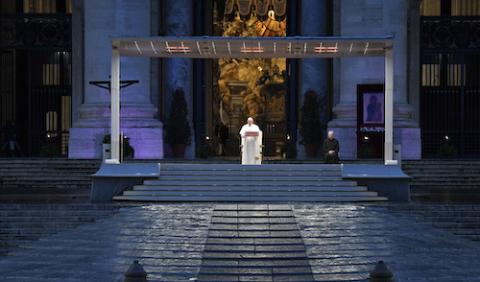 Fortunately, good pastoral sense prevails in many places. Some women religious communities are conducting funeral services without benefit of clergy. A sister dies in a motherhouse, and the leadership team handles the wake, funeral and burial. The leaders, and perhaps a few close friends of the deceased (not to exceed the limits of how many can gather legally in the locale) carry out a dignified celebration of the person's life. After the service, they process to the cemetery for the final prayers and burial. It is livestreamed throughout the motherhouse and to friends and family at a distance, providing as much comfort as possible.

Of course this is no substitute for being together, telling stories in person, expressing sympathy with a hug. Fuller, more robust celebrations will surely follow when gathering restrictions are lifted. But for now it has to be enough, and it is.

One important change is that no male priest is in sight, and no one seems to miss them. Whether they will ever be called again is an open question. I think I know the answer in many cases. This is change, progress. If and when it becomes more widespread, the whole community can move beyond the gender of sacramental leaders to the focus on pastoral needs.

A wholesale rethinking of Eucharist is all that prevents these groups, and many other local faith communities, from engaging in the customary celebration of Communion. The fact of being in extremis makes this conversation urgent as no one should be denied the Eucharist, especially at Easter. Just as teachers have learned to instruct online in short order, so too, can Catholics speed up their theological learning curve. As my undergraduate theology professor Jesuit Fr. Tad Guzie emphasized 50 years ago, "A Eucharist without a priest is a Eucharist without a priest."

All sorts of creative eucharistic options are on offer this Easter. The least welcome choice is watching a male priest confect the sacred mysteries in the privacy of his own video studio. Many people are understandably left cold by such a mechanistic approach to what is by its nature a community event. But options are the name of the game when it comes to change, so if this model chimes one's bells, so be it.

Other groups are celebrating only the Liturgy of the Word, "fasting" from the Eucharist because they do not have a male ordained celebrant in house at a time of confinement. This need not be, but it will take time to educate people to assume their rightful place as promoters of their own spirituality. Another possibility is Eucharist by Zoom call with different people taking part by doing the readings, preaching and blessings with or without a eucharistic presider.

The Vatican's model is somewhere in between. They livestreamed the pope presiding on Palm Sunday with a small group of men (okay, I spotted two nuns, but they had no ceremonial role) gathered to sing and respond. At least this had the appearance of a community gathered.

Still another way, what I favor, is the do-it-yourself approach that women-church groups and other intentional eucharistic communities have long engaged in with satisfying results. The community engages in the Eucharist, sometimes in the context of or followed by a meal, much as the early Christian communities are thought to have operated. Requisite distancing and now face masks add challenges to the choreography and costumes. But the Eucharist is an act of thanksgiving engaged in "when two or three are gathered" (Matthew 18:20). These groups have decades of experience, much to teach, and more than a willingness to share.

Just as we say with increasing confidence that the world will never be the same after the coronavirus, I am sure that the Roman Catholic Church will not be either. The hierarchical structure and many of its narrow, power-conserving, people-excluding ways will never be acceptable again, nor do they need to be. If these early days of the pandemic teach us anything, it is to look carefully and speak boldly about what really counts. In extremis, as in God, all things are possible now.