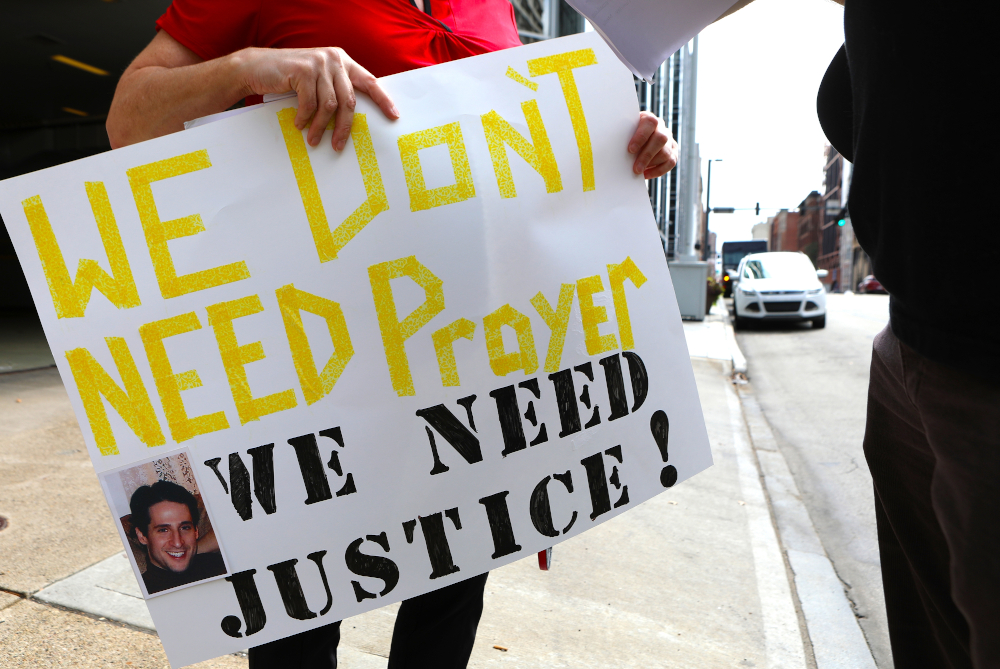 A woman holds this sign as members of the Survivors Network of those Abused by Priests (SNAP) hold a news conference in front of the Diocese of Pittsburgh Aug. 20, 2018, several days after a Pennsylvania grand jury released a stinging report that said more than 300 priests sexually abused more than 1,000 children during the course of several decades. (CNS/Chaz Muth)

A report last month that a priest in suburban Chicago had been accused of sex abuse after a diocesan review board had found "insufficient reason to suspect" misbehavior has raised questions about the efficacy of these special committees set up to review allegations of sex abuse by Catholic clergy.

For me, it also brought to mind an invitation I received last year to join one of those boards.

The call came from a priest who worked for Pittsburgh Bishop David Zubik. The bishop wanted a journalist on the board, the priest explained, and I had done good work in Catholic media.

This request to volunteer my services raised a lot of questions. Like most journalists of my generation (I'm 45), I had reported on clergy sex abuse in the Catholic Church, mostly for The Wall Street Journal. In that sense, I was qualified. I've interviewed priests, bishops, psychologists, victims, victims' families and police officers.

Like a lot of people outside the church, I thought the answers to this mess seemed obvious: humility, accountability and, above all, transparency. In short, the church needed to keep fewer secrets.

And maybe joining a review board might help. Review boards are the church's answer to a crisis that in the last two decades has cost it billions of dollars and involved more than 5,000 clergy. They offer victims a forum for presenting their cases and receiving an acknowledgment from the church of abuse, even when statutes of limitation preclude a legal case. It operates separate from law enforcement.

But the boards serve at the pleasure of the bishops, meaning they are allowed to ignore the boards' recommendation. And review boards have gotten some bad press. An investigation by The Associated Press, published in 2019, found that review boards across the country "appointed by bishops and operating in secrecy have routinely undermined sex abuse claims from victims, shielded accused priests and helped the church avoid payouts." The inquiry also revealed that more than "40 bishops have put on board high-ranking aides and attorneys who defended the church or its priests in sex-assault cases."

To be sure, a few bad apples doesn't mean the whole tree is rotten. The Catholic Church in the U.S. includes almost 200 dioceses and archdioceses.

"Some people have found the boards very helpful and healthy," said Sara Larson, executive director at Awake Milwaukee, which lobbies for church reforms to heal from and prevent sex abuse. "But others have found the boards too deferential to bishops and priests. Any time an entire body is appointed by a bishop, it seems a stretch to claim that it can be fully independent."

In the end, she added, "these systems are just as good as the people running them." 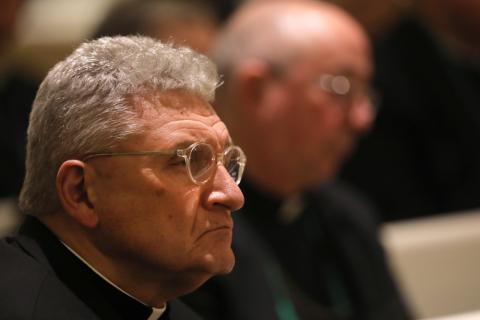 Bishop David Zubik of Pittsburgh attends a prayer service in the Chapel of the Immaculate Conception at Mundelein Seminary Jan. 2, 2019, at the University of St. Mary of the Lake in Illinois. (CNS/Bob Roller)

Mike Hoffman, a Chicago orthopedist was abused by a priest in the 1970s and 1980s, said when he went before a review board in 2006, he found the process healing. "I told them everything, and it was an exhausting, unbelievable process," he told me. "And it went as good as I could expect."

It's not just dioceses. Religious orders also have review boards that address abuse by their members. "It's mostly older priests," said Jan Ruidl, who oversaw a review board for 18 years and has worked as a parish director in Wisconsin. "And a good review board is there to give guidance to the leadership, and in the end, it always comes down to the bishop."

In my own discernment, I talked to journalists who have covered the church, priest friends and my therapist about the offer. In the end, I decided that my commitment to transparency outweighed the value I could bring to the board. The thing I didn't like was that the review board was asking me to operate in silence. That didn't seem right to me.

Part of my journalistic commitment "is an authentic desire that the truth, as I uncover it, belong to the public; the people, the wider church," I wrote in an email to the diocese. "I don't like signing non-disclosure agreements, or participating in institutional secrecy. It doesn't make sense to me to fight a culture of secrecy by promising to keep more secrets. That's the main reason I don't think I can accept this invitation."

I offered to talk to Zubik, to the priest and to "anybody else involved about how things are going in the church's efforts to create more transparency and hold priests and bishops accountable." I also offered to "meet to talk about how investigative reporting works, or how the board might improve its fact-gathering methods, if that might help."

The priest, who I won't name because we weren't interacting as part of my function as a journalist, replied kindly.

"It's apparent that you came to your decision not to accept this appointment after much careful thought and prayerful deliberation," he wrote. "I totally respect that, and I'm sure that Bishop Zubik does as well. Thank you for taking the time and care to come to this decision. I can't speak for the bishop as to whether or not he would speak to you in your role as a journalist regarding the IRB, but I can pass along the message. God bless you for the good work you do."

The thing I didn't like was that the review board was asking me to operate in silence. That didn't seem right to me.

I never heard back from the diocese about my offer to talk about truth-gathering practices, and when I asked to talk to Zubik or another church official for this piece, a church spokesman named Jennifer Antkowiak did not reply to that request, or a list of questions I emailed her.

Chieko Noguchi, a spokesperson for the U.S. bishops' conference, also did not reply to a request for comment.

I'm not writing to condemn review boards, which seem like a reasonable response to the problem of clergy sex abuse.

But in the fight for truth and openness, we all have our roles. As Paul writes in Ephesians: "And he gave some, apostles; and some, prophets; and some, evangelists; and some, pastors and teachers; For the perfecting of the saints, for the work of the ministry, for the edifying of the body of Christ."

One of my vocational roles, I have learned, is the opposite of keeping secrets.