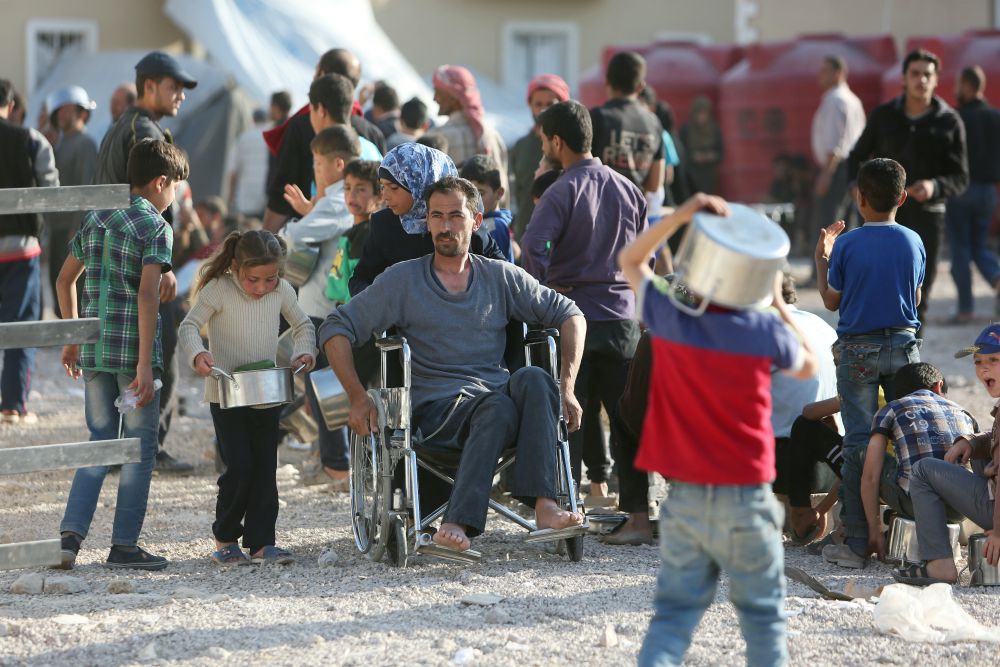 Internally displaced Syrians are seen in April at a camp outside Damascus. The United States, France and Britain launched airstrikes April 14 in Syria to punish President Bashar Assad for an apparent chemical attack against civilians and to deter him from doing it again. (CNS/Reuters/Ali Hashisho)

T'is the season for 50-year commemorations of the year 1968 and for opportunities to ponder what we learned from that turbulent time and whether history is now repeating itself. I attended an event recently that memorialized music from the era — a time that really spans the entire decade and so covers both atrocities of the civil rights movement (i.e., the 1963 bombing of the 16th Street Baptist Church in Birmingham, Alabama, that killed four black girls) and its triumphs (i.e., the passing of the Voting Rights Act of 1965).

One song that stood out to the presenter was Bob Dylan's hit single, "Blowin' in the Wind," released in 1963 He recalled the lines, "How many times can a man turn his head / And pretend that he just doesn't see?" and juxtaposed that lyric to lines in "Inferno," the first part of Dante's epic poem, "Divine Comedy": "This way of wretchedness / Belongs to the unhappy souls of those / Who lived without being blamed or applauded." The "way" isn't hell, but on its margins, "scrambled with that craven crew / Of angels who elected neither rebellion / Nor loyalty to God, but kept apart." They are unacceptable, even to hell.>

It was a jarring comparison, and it sparked several questions in my mind about the souls in Dante's poem and about Dylan's man. The souls outside heaven and hell (and note, they don't inhabit purgatory, either) chose neither side in Lucifer's rebellion against God, but even God and Lucifer agreed, neutrality is a choice. Dylan's man is willfully ignorant, actively disengaging from others' pain. Perhaps he is more selfish than neutral, but he too makes a choice. Despite overwhelming evidence to the contrary, he pretends nothing is wrong with the state of the world.

Why did the souls and Dylan's man choose a way that, on its surface, may appear peaceful? The souls' eternal punishment suggests their motivation was not peace but apathy. "Apathy suggests a puzzling or deplorable inertness or lack of passion," states the Merriam-Webster dictionary. Apathy suggests that asking, "Why aren't you outraged?" or "How can you just stand there?" or "Don't you see what's going on?" is justified. Something should be moving an apathetic person to action, but nothing is.

So why not? Are Dante's souls and Dylan's man perpetually busy? Do they need to step away from the fight for self-care? Have a series of setbacks made them feel like just giving up? Do they want everyone to like them? Are they afraid of offending someone? Are they tired of Thanksgiving ending with people throwing chairs across the room and swearing they'll never return to grandma's house again? Are they afraid of being wrong or on the wrong side of history? Do they not know where to start because the idea of change is overwhelming? Or are they just insensitive to any plight that isn't their own?

I don't think many people are neutral right now, just as I think the "both sides" claims of incivility, aggression and violence promote false equivalencies among incivility, aggression and violence. I think many people have chosen a side and act with self-interest, sometimes because they want to maintain their position in society, and sometimes because they want it to change. But what if there really were a special place in eternity, outside of heaven, for the apathetic? The perpetually busy? The willfully ignorant? The fearful? The self-centered? What would you be willing to open your eyes to that you've refused to see?