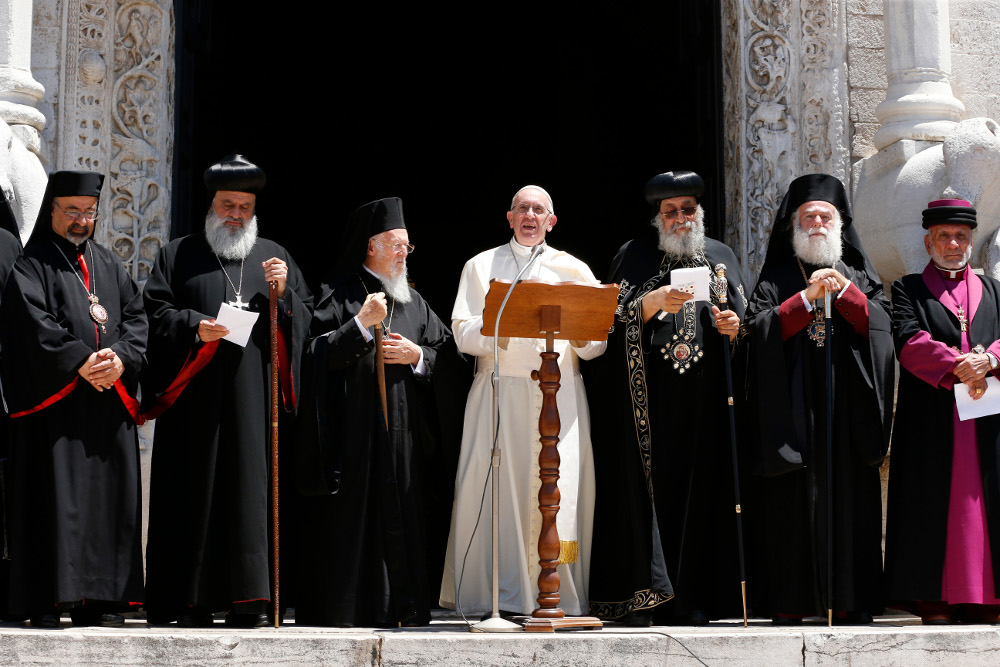 Pope Francis stands next to leaders of Christian churches as he speaks outside the Basilica of St. Nicholas in Bari, Italy, July 7. (CNS/Paul Haring)

Pope Francis has not only inherited, but continues to earn the title pontiff — "bridge-builder."

His latest major effort to oppose divisive walls and instead construct unifying bridges was his hosting of a July 7 unprecedented ecumenical gathering of Middle Eastern Christian leaders in Bari, Italy.

In his introductory address, Francis denounced the large indifference displayed by so many individuals and nations to the long suffering of so many brothers and sisters in Christ along with other persecuted people of the Middle East.

Using powerful words, he said, "Indifference kills; and we desire to lift up our voices in opposition this murderous indifference. We want to give a voice to those who have none … for the Middle East today is weeping, suffering and silent as others trample upon those lands in search of power or riches."

Just think how much worse off the Middle East is since the U.S.-led coalition's invasion of Iraq in 2003 — to eliminate weapons of mass destruction which were never proven to exist.

And to that catastrophe, add the catastrophes of outside military interventions into Libya, Syria and Yemen — where Saudi Arabia's bombing using U.S. aircraft has caused what the U.N. is calling "the world's worst humanitarian crisis."

Yes, the pope is absolutely correct, "indifference kills." Where is the outcry from the comfortable on behalf of the miserable? Where is the outcry — especially Christian outcry — for serious sustained negotiations and dialogue on all fronts? Instead of military surges, we need multi-front diplomatic surges.

After a closed-door meeting with the Middle Eastern Christian leaders, Francis in a very powerful, prophetic closing address said, "Truces maintained by walls and displays of power will not lead to peace, but only the concrete desire to listen and to engage in dialogue."

The pontiff's remarks here call to mind the coldhearted indifference of walls and various barriers along the borders of some European nations, the Israeli separation barrier — mostly in the West Bank occupied territories — the U.S. wall/barrier along its border with Mexico and many other such walls around the world.

In his closing address Francis added, "War is the daughter of power and poverty. It is defeated by renouncing the thirst for supremacy and by eradicating poverty. … Violence is always fueled by weapons. You cannot speak of peace while you are secretly racing to stockpile new arms. This is a most serious responsibility weighing on the conscience of nations, especially the most powerful."

Tragically, leaders of the most powerful nations seem to have lost touch with their conscience.

According to the highly respected Stockholm International Peace Research Institute, the U.S. is the world's top arms supplier, exporting 34 percent of major weapons to at least 98 countries, with 49 percent of U.S. arms exports flowing into war-torn Middle East nations.

And U.S. arms manufacturing corporations like Boeing, Lockheed Martin and General Atomics are making bundles of blood-soaked money in the process.

How can anyone who claims to be a disciple of the nonviolent Jesus be indifferent to all this?