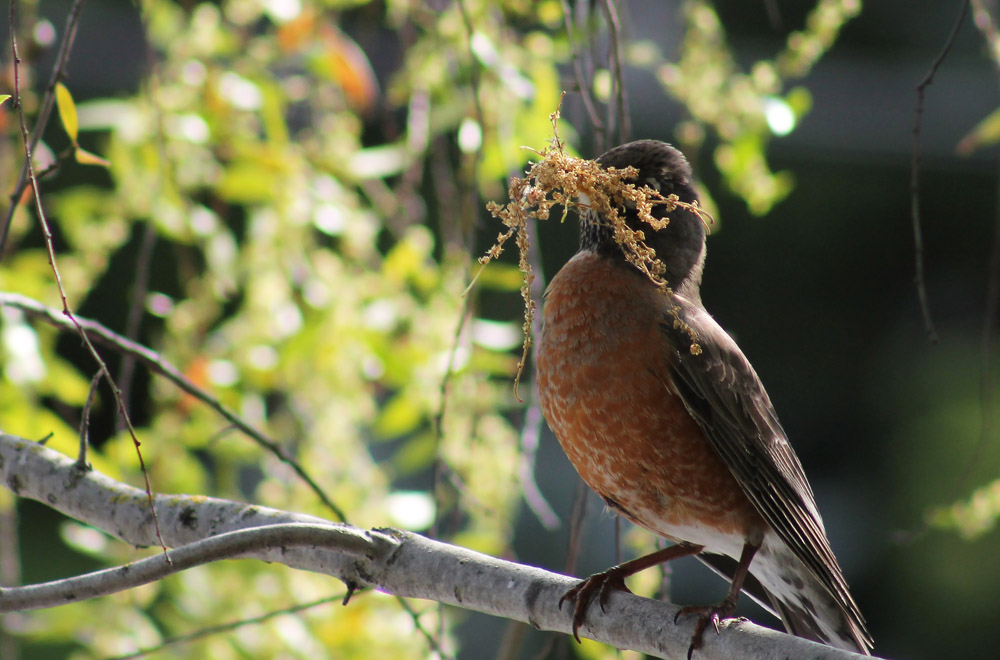 Last spring, my husband and I began noticing the rising pile of debris on the wooden bench just behind our garage. Dried grass and twigs and the desiccated leaves of last summer’s daylilies were heaped on the bench. At first we thought our grandchildren had been busy at play. Then we recognized the mound for another sort of work; our bench had become a construction site. The robins were building a nest.

We wondered at the process. No hands, no tools, just the busy beaks, gathering and depositing and cementing with mud, and, bit by bit, turning the debris into a sanctuary where their eggs would be laid and covered and kept warm until they hatched.

The robins chose to build the nest on top of the glass light fixture high on the wall. We watched the mother settle in. When we approached, she froze, willing us, it seemed, to ignore her and her hidden treasures. We found ourselves speaking quietly near the nest, walking wide of the mother bird.

Only once did my husband draw near. He began to worry that someone would flip the switch and turn on the light over which the nest was balanced. What, he asked me, if the light bulb overheated the eggs? What if the heat from the bulb caused the nest to catch fire? The temperature of a robin's eggs must be kept regulated. When it is too cold, the mother will warm the eggs with her brood patch, an area of normally covered skin on her belly from which the feathers are shed only when she is nesting. When it is too hot, the mother will shade her eggs with her wings. One day, when the mother had left the nest, as she sometimes did for short periods, my husband climbed the ladder and carefully unscrewed and removed the bulb. He was careful not to touch the nest or the eggs it held. He climbed back down and we began our watch.

In mid-June, three small heads could be seen peeking up from the nest. Then, nothing. We waited. No mother bird, no sound from the hatchlings. Again my husband took his ladder and climbed up for a look. The nest was empty.

It's hard to describe the sadness I felt at the sight of the empty nest. I know how few baby robins survive their first year. The world is filled with their predators. Hawks, raccoons, cats, rats, even the tree squirrels who seem most interested in the seeds in our bird feeders, all of them are dangerous for robins. So the loss of these birds is neither unexpected nor rare.

I think my sadness was bound up with other sorrows. I watch the families waiting at, or crossing, all the borders of the western world. I watch them wading ashore from the Mediterranean Sea. I watch them crossing the border in Texas. I recall the summer we lived in El Paso, where my husband was clerking. Every day we saw people wading the Rio Grande River to reach United States soil. Driving on the highway through town we could look over at the people crossing the water. When I consider parents like them today, I think of the robins, trying to build a nest. They, too, have few tools. But they are determined. And what we may mistake for debris — all the plastic bags and makeshift belongings, the trail of empty water bottles abandoned in the desert — is the equivalent of the twigs and grasses on our bench. It is evidence of the hard work of finding a home, a place where their children can be warmed and sheltered, where they can grow and become strong.

Even the sparrow finds a home, and the swallow a nest for herself, where she may lay her young, at your altars, O Lord of hosts, my King and my God.

That word, "even," catches me up. It tells the truth: that we hold a hierarchy of worth. We can name those we assume will have a home, ourselves first among them. The assumption carries with it a sense of just rewards, with no qualifiers. The words spoken by a U.S. citizen, "We bought our first home," falls naturally on our ears. Not, "Even we bought our first home."

The psalmist reminds us that, in God's economy, God's kingdom, "even the sparrow" — this tiny bird, prey to death at every turn — "finds a home … where she may lay her young, at your altars, O Lord of hosts." That "even" turns my face to our southern border, where these fleeing families are like the birds of which the psalmist sings. They, like the house sparrows, are small in the sight of the world and vulnerable in the sight of their many predators. Where will they find a home? Where will they build a nest for themselves that they may lay their young?

My husband and I kept the empty nest. It is a thing of such beauty, so finely made. It is a reminder of all the other mothers and fathers trying to find a safe place, a place to build a nest for their children.

A version of this story appeared in the Aug 10-23, 2018 print issue under the headline: Robins' nest-building reminds me of parents at border.