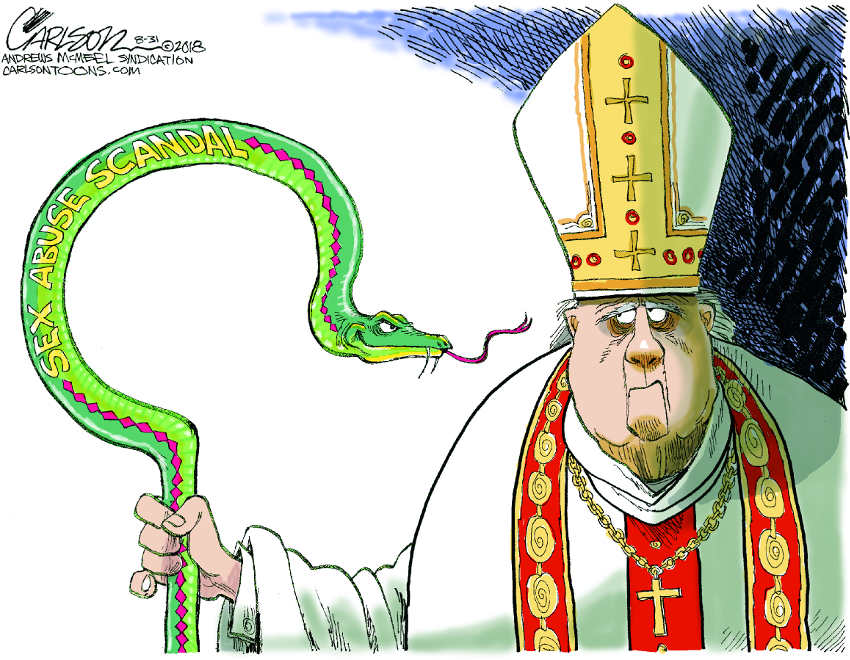 NCR correspondent Peter Feuerherd introduced his weekly round-up of parish news, the feature we call The Field Hospital, by noting that while across the U.S., Catholics gather to address the sex abuse crisis, the mission work of the church continues: welcoming refugees, feeding and sheltering the poor and supporting the emotionally distressed.

In that same vein, let's turn our attention first this morning to church workers in the vineyard, and revisit the NCR occasional series that explores the Christian ministry of peaceful witness and nonviolence. We call the series Making Peace, and here's the two latest additions:

Without a question, however, the issue of clergy abuse and episcopal cover up is dominating the Catholic news world right now. A few days ago I was asked to put together a summary of what has happened in recent weeks, so I wrote this about the events that happened through the summer months.

But the story continues to advance. Yesterday we learned that after the bombshell Pennsylvania abuse report, at least five other states are launching investigations, mostly by or through states' attorneys general into Catholic dioceses.

"How do we cope with all this? What should we be doing?" I have been asked. NCR contributors have been thinking about these same quesations and here are some of their answers:

Our podcast NCR In Conversation, which the Catholic Press Association this summer called "best podcast," is ready to begin its third season. In the first episode, which will be available later today, NCR editors and correspondents discuss the sex abuse crisis.

And in other news we are following:

Michael Sean Winters, who says he has been doing penance this week by watching the confirmation hearings for the Supreme Court nomination of Judge Brett Kavanaugh, has a two part look at the judicial theory called "originalism."

Cardinal Raymond Burke, one of Pope Francis' leading critics, said Sept. 6 he is still pressing Francis to respond to an earlier set of questions about his views on marriage.

Congressional budget analysts predict the deficit for the full year will be about 19 percent bigger than last year’s shortfall, the result of both the Republican tax law and spending boosts approved by lawmakers earlier this year. Federal budget deficit increases 79%. Throught July, the shortfall totals $684 billion.

Economists at Bloomberg are saying, in terms of the government’s underlying fiscal stance, a strong economy makes the projections of large deficits more worrisome.

Commentary: Though no one in Washington will admit it, our nation's finances are in deep trouble. Spending is up, revenue is down, and this will only get worse. Trump trillion-dollar-plus deficits are putting America on a path to fiscal ruin.

This column began with a reference to Pope Francis' image of the field hospital, so let's end with a quote from San Diego Bishop Robert McElroy: "The image of the church as a field hospital points to the reality that the church is never remote from human experience, never self-referential if it is to be faithful to its mission. Rather the church must always be enmeshed in the real lives and sufferings and challenges and joys of the people of God and the whole of humanity."