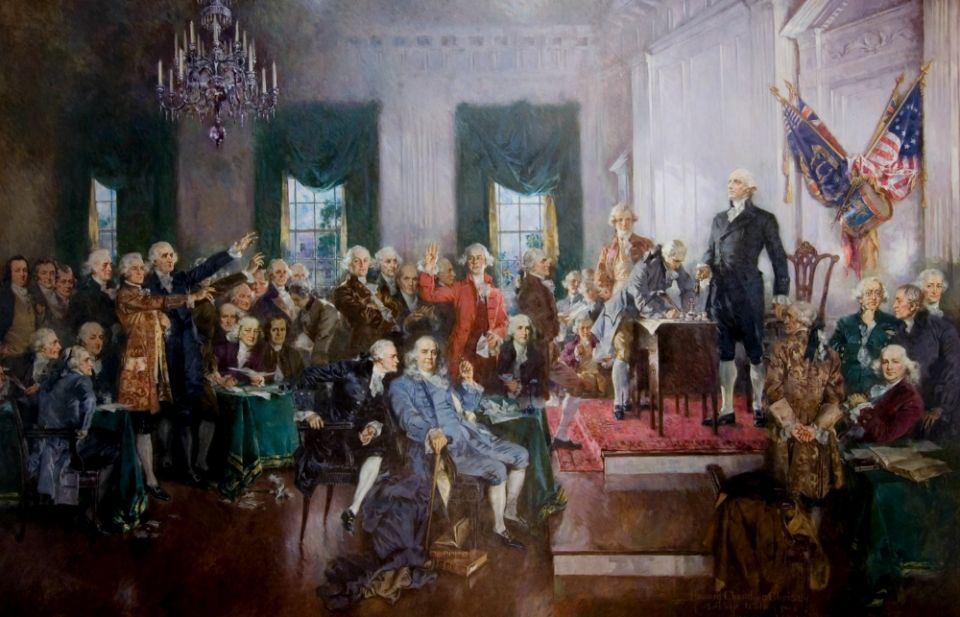 "Scene at the Signing of the Constitution of the United States," a 1940 painting by Howard Chandler Christy, is seen in the U.S. Capitol building. (Flickr/Architect of the Capitol)

The confirmation hearings for the Supreme Court nomination of Judge Brett Kavanaugh have begun and they are not pretty. Hearings are now an endless series of gotcha questions from one side, matched by an endless series of "Tell us again how much you love your mother and apple pie" questions from the other side. The nominee is as evasive as can be but, as with virtually all Republican nominees, a constant refrain is asserted by the would-be justice: I am an originalist.

In the days before Kavanaugh's nomination was announced, I wrote an article about the possibility that President Donald Trump might nominate Judge Amy Coney Barrett. I stated that my principal objection to her, as to Kavanaugh, is that they put themselves forward as originalists, and I find originalism intellectually wanting. In response, Kevin Walsh, writing at Mirror of Justice, chided me for not knowing what I was talking about when it came to originalism and cited several articles that he thought showed a more nuanced originalism.

I plead guilty. I do not regularly read law review articles and I was not up to date on developments within the originalist legal community. Today and Friday, atoning for my neglect, I should like to examine two of the essays Walsh commended, Lee Strang's "Originalism and the Aristotelian Tradition: Virtue's Home in Originalism," published at the Fordham Law Review, and an essay by Walsh and Notre Dame Law Professor Jeffrey Pojanowski published at the Georgetown Law Journal. It will be a bit of a slog, but the issue could scarcely be more important as the Senate considers Kavanaugh's nomination.

Before consulting these essays Walsh recommended, I understood originalism as it was conceived and put forth by the likes of Robert Bork. In Strang's words, "Bork argued that the Constitution's originally intended meaning was the sole proper source of Supreme Court authority. An originalist Supreme Court that followed this meaning, Bork argued, 'need make no fundamental value choices.' Instead, the Constitution's originally intended meaning would restrain the Court: 'The judge must stick close to the text and the history, and their fair implications.' "

That to me was what originalism meant and — here is the rub — the only thing it could mean. It is certainly how the label was applied by Kavanaugh in his remarks thanking Trump for nominating him.

Strang notes that the "normative attractiveness of originalism's ability to cabin judicial discretion was tied to a second, related claim: judges limited by originalism respected democracy." Indeed, this too remains part of the common language used to defend originalism, that it respects the political branches.

That defense is in tatters after a series of decisions, from Citizens United to Janus, in which the court did not bat an eyelash when striking down long-standing legislative achievements. But if you watch Fox News, you know that the talking point about judges interpreting the law and not making it remains a popular one in defining and defending originalism.

Strang rehearses different criticisms of originalism. He cites the argument of Ronald Dworkin that "there is no such thing as the intention of the Framers waiting to be discovered, even in principle." Dworkin is both wrong and right. Different Framers wanted different things from their common effort and the document reflects compromises that were unique to that time and place. The Founding Fathers, being human, also miscalculated the manner in which their constitutional handiwork would play out, sometimes in ways that became apparent to them almost as soon as their work was done. For example, they were keen to design a government that would frustrate the formation of factions or parties, but the body politic immediately divided itself into parties and those same Framers did not freak out, nor reject their work, nor denounce the current state of politics. They adjusted.

The second criticism of originalism that Strang notes is the one that most squares with my concern. He writes:

Second, nonoriginalists argued that, even when one could reliably ascertain the Constitution's original intent, it frequently "ran out." This occurs, nonoriginalists argued, when societal circumstances have changed to such a degree that the original intent's application is underdeterminate. The original intent also "ran out" when, due to its high level of generality, it did not determine the outcome of concrete cases. These sources of underdeterminacy left judges adrift and their decisions unmoored from the Constitution, thus fatally undermining originalism.

I do not know if the flaw is "fatal." I have argued in these pages before that, for example, the Founders could only confer a right to bear a musket, not an assault rifle, and if you are going to cling to the Founders' intent in Second Amendment jurisprudence, your arguments will necessarily be somewhat idiosyncratic. The other criticisms need not detain us.

In response to these criticisms, a second generation of originalists acknowledged that judges needed to exercise judicial discretion, that varied cases required more than a simple application of the text. There were divisions between "original meaning" and "original intent" originalists that Strang relates, and other differences emerged under the overarching heading of originalism.

"Today's transformed originalism has opened a space for judicial discretion and a place for the exercise of judicial judgment," he writes. "Originalism today explicitly acknowledges judicial discretion in the contexts of constitutional construction and nonoriginalist precedent. Further, originalism has also embraced the fact that judges exercise judgment, constrained though it may be, and other human capacities in the contexts of originalist precedent and in the paradigmatic work of articulating and applying the Constitution's original meaning."

Strang sees the problem, writing, "At this point, however, no originalists have explained how these modifications — judicial discretion and burdens on judges' capacities — do not undermine originalism's core insights."

He argues that in wrestling with the necessity of judicial discretion, those who invoke a deontological perspective are at loggerheads with the consequentialists. He believes virtue ethics can be introduced and possibly forge a conservative consensus:

Call me picky, but shouldn't it be pointed out that John Finnis and Germain Grisez, the natural law theorists of whom Strang is so enamored, were not in Philadelphia in the summer of 1787?

I shall conclude this essay on Friday.