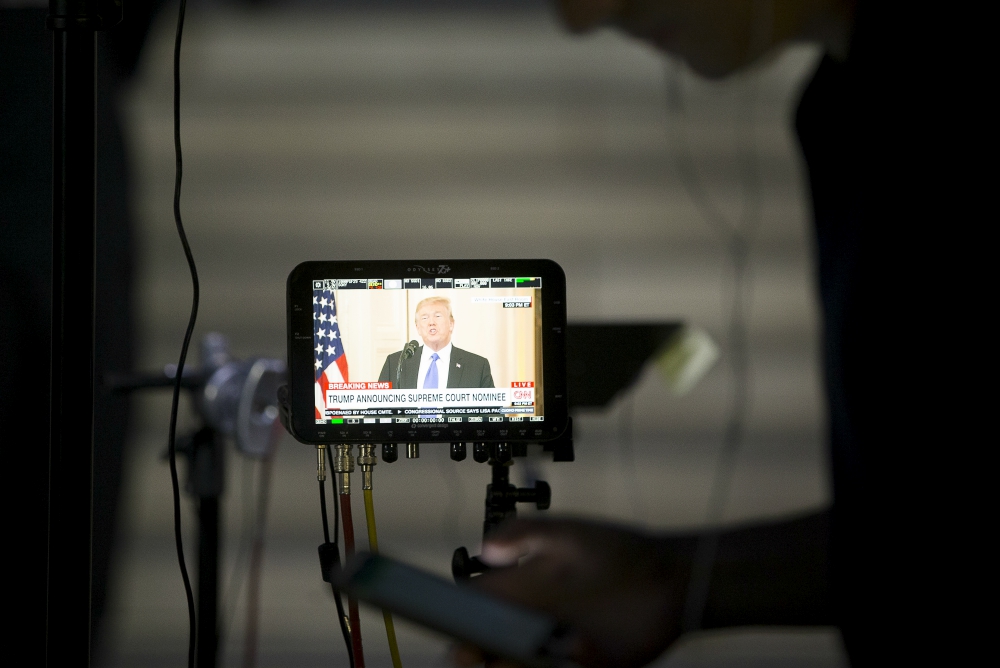 President Donald Trump is seen on a broadcast monitor outside the U.S. Supreme Court in Washington July 9. (CNS/Tyler Orsburn)

President Donald Trump and New York Times publisher A.G. Sulzberger met recently amid diverse reports as to what they discussed. The president said he discussed "fake news," while Sulzberger says he cautioned the president on the dangers of continuing his attacks on the media.

One major concern, however, is how Trump's words have empowered dictators and would-be dictators around the world. A Baltimore Sun editorial highlights some of what has happened around the world since Trump has started preaching his fake-news gospel.

World leaders eager to exercise greater control over their citizenry are using the very words of Trump to impose new penalties or punish journalists with whom they disagree. When Trump met with President Rodrigo Duterte in the Philippines, Duterte called journalists spies while Trump laughed.

Just before the news conference between Russian President Vladimir Putin and Trump in Helsinki, a Nation magazine journalist was forcibly removed from the room. A reporter critical of Putin was murdered in Ukraine less than two months before the summit.

President Recep Tayyip Erdogan of Turkey has increased his own power and reduced the power of the judiciary, yet Trump rushed to congratulate him.

The concerns continue with Poland, Malaysia, Egypt, Vietnam and Hungary.

Czech President Milos Zeman talked about liquidating reporters and appeared at a news conference with a fake AK-47 with the words "for journalists" written on it. Trump invited him to the White House.

Such leaders are relishing Trump's use of "fake news" and "enemies of the people." They are using it to their advantage. Journalists are increasingly unsafe. Trump riles up his supporters at rallies to condemn the press for criticizing the president. How far away are we from physical violence toward journalists — especially at one of the frenzied Trump rallies? A White House reporter was denied access to a Trump event after asking questions the White House didn't like.

The United States has been a beacon for democracy throughout the world at least since the time of the First World War. We have been Ronald Reagan's shining city on a hill.

Now, we are becoming a refuge for scoundrels. Those who would choose to rule their people by force and fiat can now point to the president of the United States and proclaim this is the way a great democracy now works.

Our allies are confused and demoralized. Our own citizens are mounting a resistance that hopefully will pay off in November. The courts are fighting back. The Mueller probe grinds on. The press is continuing to try hard to bring the truth to the American people. Yet millions continue to follow blindly the demagogue in the White House.

Our democracy does indeed hang in the balance. What happens in these next few months will determine what kind of country we will be for decades to come.