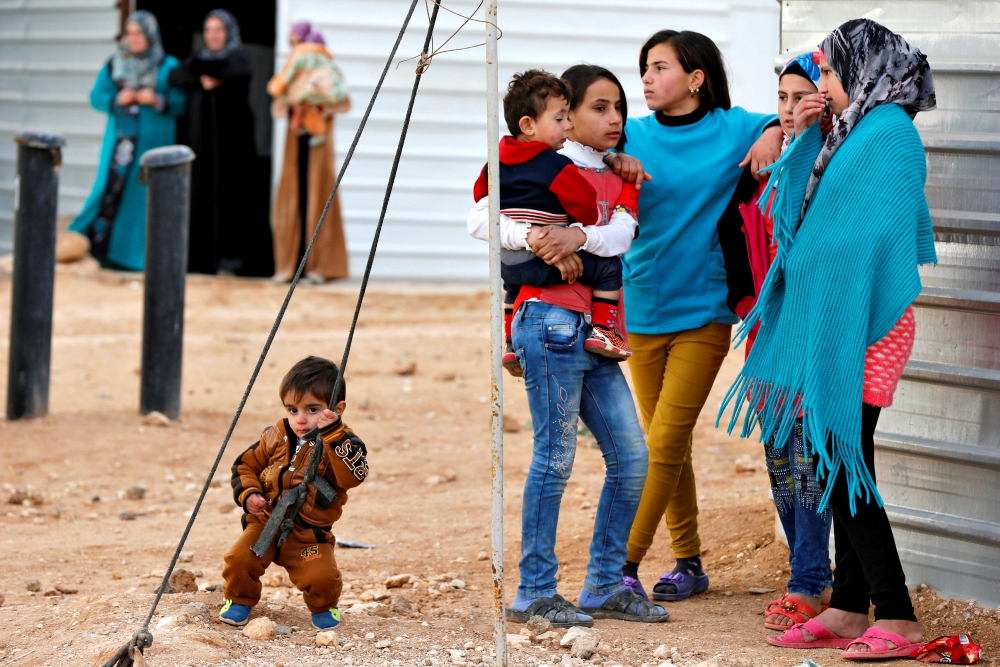 Syrian refugees wait outside their shelters in January 2018 at Zaatari camp near Mafraq, Jordan. (CNS/Reuters/Muhammad Hamed)

There's always a danger when we listen to a Gospel like this one today that we've heard many times before, there's a possibility that we almost say to ourselves at the beginning, "I've heard that before," then we kind of turn it off. But it's important as always to listen deeply to every Gospel passage that we reflect on during our Sunday liturgies, and maybe especially those that we have heard and that have become very familiar to us.

As we listen to this Gospel today, I hope we can put it into the context of what has just happened in the Gospel that Luke records before this. You may remember just a couple of weeks ago, Jesus had sent his apostles out two-by-two to go the towns and villages where he was to come. They went to a Samaritan town and they were pushed away. When James and John came back and told Jesus, they wanted to call down hellfire from heaven to destroy that town.

Jesus said, "No." He understood why there was animosity from the Samaritans toward his disciples and it wasn't a time that he could resolve that animosity. There had been hundreds of years of history of hatred that had built up between the people of Samaria and the Jewish people. They each considered the other heretics from the word of God.

They hated each other — a long, complicated relationship. Jesus knew it would take a long time to work at resolving that, bring peace and reconciliation. So he told the disciples, "No, at this point we'll just move on," which they did.

But now, listen to today's Gospel. Who is the hero? A Samaritan, someone despised by that teacher of the law who asked Jesus, "Who is my neighbor?"

As we listen to the parable, we must keep that context in mind. It adds a deeper meaning to the parable — the leap of love that that Samaritan person took toward the one who had been nearly killed by the robbers. But also as we listen, I think it's important to reflect a bit more on our second lesson.

Who is telling us this parable? In that second lesson, as we heard today, Paul is describing who Jesus is — not just some ordinary rabbi or teacher. Here's what Paul says: "Jesus is the visible image of the invisible God."

Do you remember the beginning of John's Gospel: "In the beginning was the Word, and the Word was with God, and the Word was God ... the Word took flesh, became one of us." That's Jesus. I don't think we let that sink in enough that when we hear these words in the Gospel, it's God speaking directly to you, to me, to each of us — God, not just some human person. That's not a human law; it's what God has designed for bringing fullness of life to all people everywhere.

Paul goes on to say, "He is before all things, and in him all things hold together. And he is the head of the body, the church, also the firstborn of the dead," the one who is already risen — Jesus, one like us in every way except sin, but now Son of God in glory, brother to each of us, but God in glory.

If we let that shape the way we think about the Gospel and try to understand that this is God speaking to us, trying to show us how we build the reign of God in our world, that is, how we transform our world into a world where everyone has fullness of life, fullness of joy, and the promise of everlasting life. That's our call as disciples of Jesus.

Now as we listen to the parable, perhaps it will have more impact upon us — God speaking directly to me about how to relate to others in the world, even to my enemies.

I don't think any of us will be surprised when I suggest that this parable is especially timely for us as a people, each of us individually, but as a people when we consider what is happening at our border.

Who could not be filled with poignant sorrow when you saw that picture of the man with his 23-month-old daughter lying on the shore of the Rio Grande River, trying to escape violence, trying to escape a life that was not livable, trying to find a place where he and his family could share what we all share — opportunity for a full life.

We let them die on that border. His wife was on the other side watching her husband and her baby die. Yet we're preparing to make it even more difficult. How can we be like that?

Consider a country (I've mentioned this before; maybe you heard me) like Jordan on the border of Syria, a tiny country, indeed a country filled with people, not like ours. As tens of thousands of people flee Syria because of the violence going on there, they take them in.

One Jordanian man, when asked about this, said, "Well, after all, they are our brothers and sisters."

Isn't it, if we follow the way of Jesus, for us to say the same thing about those who seek to flee violence, hatred, poverty, to try to find a life for themselves and their children? Shouldn't we especially, as we listen to this parable, ask ourselves, "Who is my neighbor?"

Anyone who is in extreme need is clearly the answer that Jesus gives. As he concludes that conversation with the teacher of the law, he tells him, "Go and do likewise."

As we hear this Gospel today, each of us must hear in the quiet of my own heart, "Go and do likewise."

Editor's note: This homily was given July 14 at St. Ambrose Church, Grosse Pointe Park, Michigan. The transcripts of Bishop Thomas Gumbleton's homilies are posted weekly to NCRonline.org. Sign up here to receive an email alert when the latest homily is posted