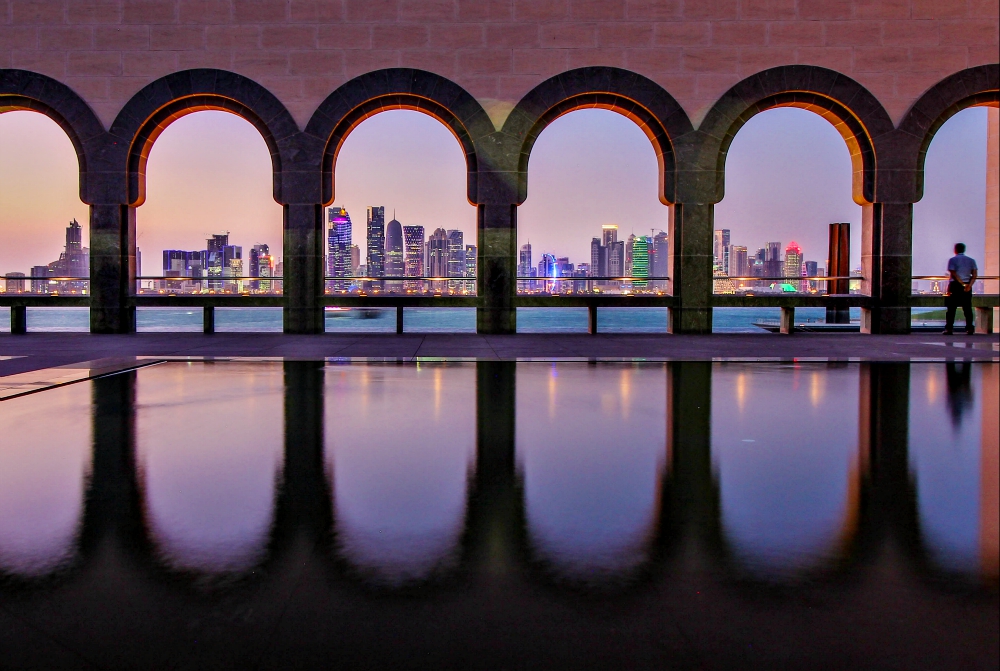 Since June 2017, an underreported conflict has simmered among Sunni Gulf states in the Middle East with major political ramifications for both the U.S. and the region. Early in that month, a coalition of Arab countries led by Saudi Arabia and the United Arab Emirates declared economic war on Qatar by imposing a land, maritime and air blockade on the small Gulf country.

This quartet of anti-Qatar countries, which also included Egypt and Bahrain, issued a list of demands to Qatar with a 10-day deadline to strong-arm the country into compliance. The 13 demands included ending Qatar's alleged "support for terrorism," shutting down the satellite television station Al-Jazeera and other media outlets, downgrading relations with Iran, ending military ties with Turkey, cutting links with the Muslim Brotherhood and Hamas, and paying compensation to "victims of terrorism."

The extreme and unrealistic nature of the demands made it clear that the real aim of the quartet was part of an effort to reshape the political map of the Gulf and Middle East and force Qatar into line with the policies of Saudi Arabia's crown prince Mohammed bin Salman (commonly called MBS), particularly his hardline stance against Iran.

MBS was undoubtedly encouraged a day after the blockade was initiated when U.S. President Donald Trump tweeted, "So good to see the Saudi Arabia visit with the King and 50 countries already paying off. They said they would take a hard line on funding ... extremism, and all reference was pointing to Qatar."

Trump's aggressive positon on Qatar had been prepared by his son-in-law and adviser Jared Kushner, who had developed a close relationship over the years with the new Saudi crown prince; the crown prince of Abu Dhabi Mohammed bin Zayed (called MBZ); and the UAE ambassador to Washington, Yousef al-Otaiba. When Trump visited Saudi Arabia two weeks before the blockade of Qatar began, he was easily persuaded to support the Saudi and Emirati positions and this was taken as a green light by MBS and MBZ to act against Qatar.

More than a year later and, to the surprise of many observers, Qatar has not only managed to resist the attack on its national sovereignty, but has in fact emerged from the crisis stronger and better-positioned. It has achieved this by doing what the Qataris do best — quietly and methodically renewing and building multiple alliances and understanding how to play the public relations game in the West, especially in the United States.

Qatar's first priority was to address the military threat and the blockade, which it did by strengthening its military ties with Turkey, quickly discouraging Saudi Arabia and the UAE from direct intervention.

Next, Qatar turned its attention to the economic embargo. Previously, Qatar had imported most of its food through Saudi Arabia, the only country it shares a land border with. With that route now blocked, Qatar worked out an agreement with Iran, involving air and sea routes through Iran, Iraq and Turkey for an uninterrupted flow of goods.

The next priority for Qatar was improving ties with the United States. Despite Trump's initial criticism, Qatar could count on the support of (now former) U.S. Secretary of State Rex Tillerson and Defense Secretary James Mattis, both of whom understood the implications of the reckless action of Saudi Arabia and the UAE as well as the critical importance of Qatar to the U.S. Most notably, Al Udeid Air Base in Qatar serves as the headquarters for U.S. military operations in the Middle East.

Mattis and Tillerson understood that Trump's statements were really coming from the influence of UAE ambassador al-Otaiba on Kushner. Mattis and Tillerson had also seen the negative results of the adventurism of MBS and MBZ in the Middle East, including the continuing bloody war in Yemen; their support for militant fundamentalists in Syria; and their collusion with the Egyptian army in a coup that overthrew the Muslim Brotherhood government in Egypt.

Qatar also announced that it would spend $1.8 billion upgrading the Al Udeid base, which houses 10,000 U.S. personnel, and signed a $197 million deal with the U.S. to expand the Qatar Air Force's Air Operation Center. Qatar has also sealed a deal with the U.S. to purchase $300 million in guided missiles.

The next step taken by Qatar was to improve its image in the West. Part of the Saudi campaign against Qatar was a massive public relations effort in Western capitals to increase diplomatic pressure on Qatar and turn public opinion against it. Qatar quickly responded with an effective PR campaign of its own in the West, spending a reported $1.5 billion on such efforts.

The Qatari PR effort coincided with regional developments that worked in its favor to improve its image and weaken the Saudi message.

The first development was connected to the war in Syria. With the Syrian government turning the tide in the civil war, support for rebel groups has shifted from Qatar to Turkey, neutralizing the argument that Qatar was supporting extremist groups in Syria.

The second development was the ascent of bin Salman, who became the Saudi crown prince less than three weeks into the Qatari crisis. MBS is increasingly blamed in the West and Middle East for launching the war in Yemen and his campaign to increase individual freedoms in Saudi Arabia has been tarnished by arbitrary arrests of human rights activists, journalists and clerics.

In addition, his unofficial alliance with Israel and the UAE against Iran has led to a growing perception in the Arab street that the quartet is an autocratic conspiracy against Arab aspirations for greater political freedom and change.

This perception has been greatly reinforced by remarks the crown prince made in a meeting with Jewish leaders and published reports that MBS has in effect adopted the Israeli line in his realignment with Israel and the Trump administration against Iran.

Qatar, on the other hand, has shown a political maturity throughout the crisis, despite being a small country dwarfed and outnumbered by the countries arrayed against it. It continues to act as a trusted mediator in the Israeli-Palestinian conflict, a critically ally to the United States and a boon to U.S. energy and weapons companies.

Perhaps the strongest indicator that Qatar has been able to confront the aggression launched against it 15 months ago are remarks made by Trump on an April 2018 visit to Washington by Qatari Emir Sheikh Tamim bin Hamad Al Thani. Trump praised the relationship between the two countries as that of "great friends" and thanked the emir for "action to counter terrorism and extremism in all forms."

While Qatar has successfully countered the blockade imposed by the quartet 15 months ago, it will need to continue to reinforce its strategic value, both militarily and economically, to the U.S. in order to stave off the pressure from Saudi Arabia that is likely to continue.