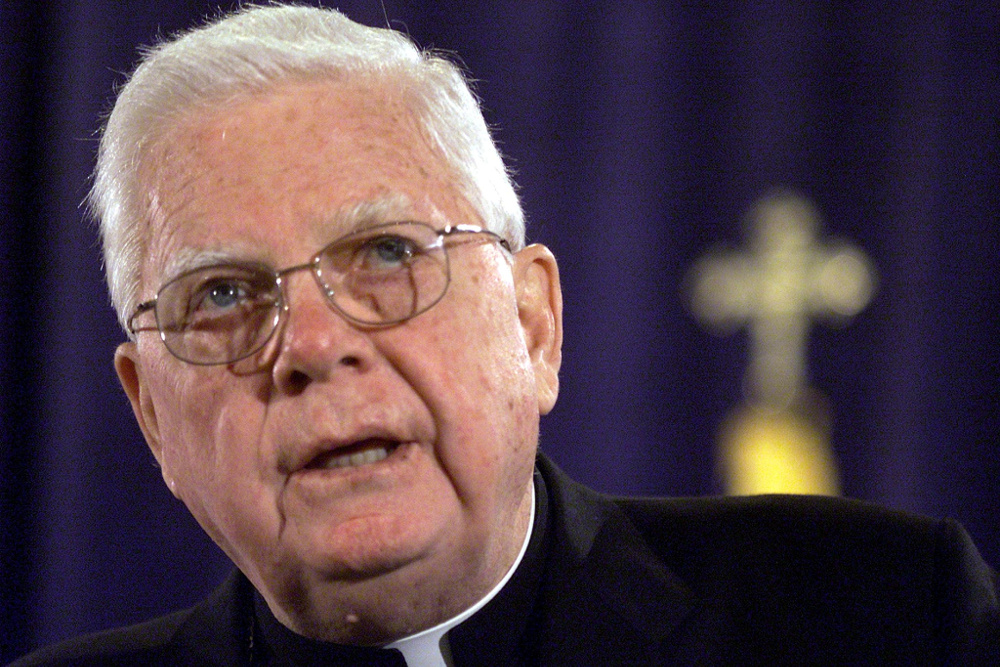 Cardinal Bernard Law, who had been one of the United States' most powerful and respected bishops until his legacy was blemished by the devastating sexual abuse of minors by priests in his Archdiocese of Boston, died early Dec. 20 in Rome at the age of 86. He is pictured in a 2002 photo in Washington. (CNS/Brendan McDermid, Reuters)

Cardinal Bernard Law, who died Dec. 20 in Rome at age 86, began his priestly life as a journalist, but rose quickly up the ecclesiastical ladder only to come crashing down in scandal and disgrace. May God have mercy on his soul.

As editor of the Natchez-Jackson, Mississippi, diocesan newspaper in the 1960s, Fr. Law bravely supported the civil rights movement. He even had to hide in the trunk of a car when his life was threatened. He also spent time at the U.S. bishops' conference in Washington, where as head of the office of ecumenism he worked on improving relations with Protestants and Jews.

As a result, by the time he became bishop of Springfield-Cape Girardeau in 1973, he had solid progressive credentials in both ecumenism and social justice. While in Missouri, he became friendly with the Bush family through George H.W. Bush's brother, who had financial interests in the state.

In 1984, Law was promoted to archbishop of Boston, where he was the first archbishop to have attended Harvard University. His arrival was greeted with great hope.

He soon saw his role as a national and international leader. His connection to the Bush family proved invaluable and probably moderated his political views. He strongly supported the pro-life agenda of the pope and the American bishops, but not the consistent ethic of life espoused by Chicago Cardinal Joseph Bernardin.

Even so, Law was not afraid to use his influence to support the policies of the bishops’ conference. One staff person reports he was well-briefed and effective when meeting with Cabinet secretaries. His phone call was also put through to Air Force One to complain when the Reagan administration attempted to classify ketchup as a vegetable in school lunches.

As a loyal supporter of John Paul II, Law also played an active role in the church as a cardinal. The Vatican used him in communicating with the Bush White House, especially prior to the pope’s historic visit to Cuba. In return, the Vatican often followed his recommendations for episcopal appointments in the U.S.

With this power and influence came a growing arrogance that demanded others, including bishops, defer to him. Rather than trying to persuade his fellow bishops, he did end runs around them by going to Rome to get his way. Bishops did not appreciate this and responded by voting him down for conference offices, including president.

But it was his failures in supervising the priests of Boston that brought him down. Whether through stupidity or arrogance, he failed to deal with the priests who abused children, including serial abusers. When the bishops privately discussed the issue, he encouraged stonewalling. He even passed on bad priests to other bishops without telling them of their abuse. His attempts to hide the truth made matters worse.

Cardinal Law's life is a cautionary tale of what can happen to an ambitious cleric who loses sight of his duty to serve the people of God. His inability to respond compassionately to the pain and suffering of abuse survivors and their families was criminal. That many more bishops did not resign because of their failure to stop abusive priests is a scandal.

Pope Francis is right in identifying clericalism as a perennial sin in the church. The adoption of zero tolerance for abusive priests was long overdue. We also need zero tolerance for bishops who, like Law, fail to do their duty.

Read this next: Pope upbraids Vatican bureaucracy: Serve the world, not 'degraded logic of small cliques'
Related: After his fall, Law found normality in Rome

Editor's note: Sign up to receive free newsletters, and we will notify you when new columns by Fr. Reese are published.