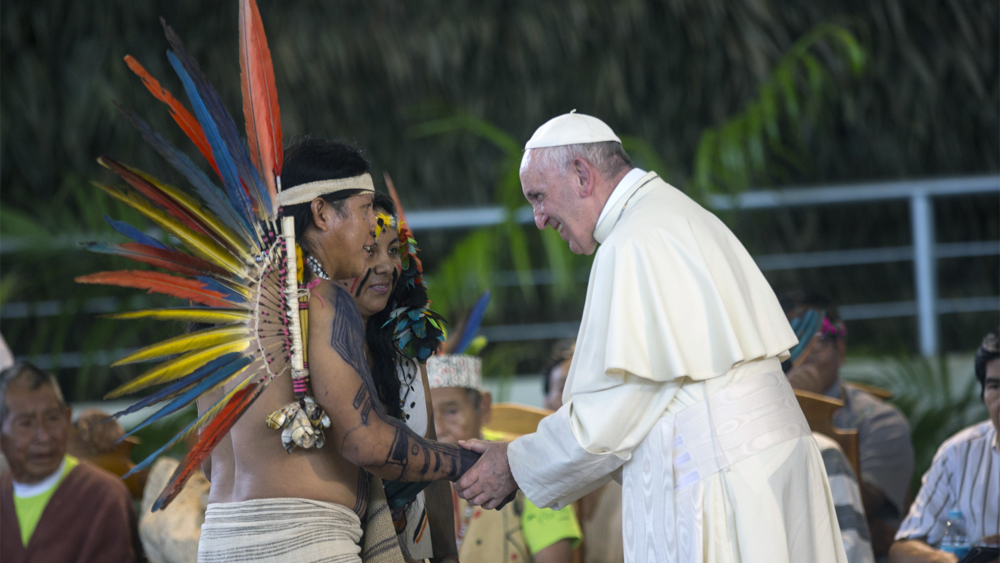 Pope Francis greets indigenous representatives in Puerto Maldonado, Peru, on Jan. 19, 2018. Standing with thousands of indigenous Peruvians, Francis declared the Amazon the "heart of the church" and called for a threefold defense of its life, land and cultures. (AP/Rodrigo Abd)

The synod of bishops on the Amazon, which will meet in Rome this October, will discuss the possibility of ordaining married men in the Catholic Church, according to the working paper released June 17 by the Vatican.

The synod, called by Pope Francis to deal with issues facing the church in the Amazon area, will focus on protection of the environment and the church’s ministry to indigenous people, which necessarily includes talking about the shortage of clergy in this vast region.

The proposal to be discussed in October would be the possibility of ordaining "viri probati," or mature married men, in exceptional situations. Many of these would probably be married deacons who already have some training.

This is the first time in centuries that the Catholic Church has put the topic of married clergy on the agenda of an international meeting of bishops.

For about half its history, the church did permit married priests. According to tradition, all the Apostles were married except St. John.

The rule of celibacy was gradually imposed, although even today there are exceptions. Married Protestant ministers who become Catholic can be ordained. In addition, Catholic clergy from Eastern churches, like the Ukrainian Catholic Church, have always been permitted to be married before ordination.

Celibacy is not dogma; it is a legal requirement that can be changed.

It has been an open secret that bishops in the Amazon area have raised the issue of married priests with the pope because they have huge dioceses with few priests. Although Francis places a very high value on celibacy, he is also a pragmatist who recognizes that indigenous communities are being denied the Eucharist and the sacraments because they don’t have priests.

Even so, conservative Catholics oppose the change as against tradition. For conservatives, this is just another example of Francis giving in to contemporary culture.

Limiting ordination to "mature men" is a classic Catholic compromise aimed at limiting the fears of conservatives. The change will be portrayed as limited and exceptional.

But both traditionalists and progressives believe that once ordination is permitted in exceptional cases, it will spread to more and more situations. After all, there are other places in the world that don’t have enough priests to serve Catholics desiring the Eucharist and the sacraments.

Eventually, as in other churches, married clergy will be the norm rather than the exception.

Those who believe that ordaining married men will solve all of the church’s problems have not been paying attention to our sister churches. Protestant and Orthodox churches have many of the same problems as the Catholic Church, including clericalism and sex abuse.

In addition, how is the priestly education of married men going to be conducted and paid for? A married man with kids cannot abandon his family to spend four years in a diocesan seminary. And once he is working in a parish, will he receive a just salary that supports his family? Too many Protestant clergy have incomes so low they qualify for food stamps.

Finally, what about those who are already ordained?

The Catholic Church is following the Orthodox model, which means that the man must be married before ordination. This is currently the rule for Catholic deacons. If a deacon’s wife dies, he is not allowed to remarry. If the same rule applies to priests, we will end up with some priests raising their children as single parents.

Also, there are currently too many priests in relationships with women that should be legitimized out of justice to the women involved, let alone their children. And then there are the thousands of priests who left to get married. How about letting them back into ministry?

All of these issues must be faced, but that does not mean the church should maintain mandatory celibacy. The Catholic Church has a shortage of priests that is not being resolved under the current rule of celibacy. But we need to recognize that along with the opportunities come challenges. Even if the synod votes in favor of ordaining "viri probati," it will be only the beginning of a process, not the conclusion.