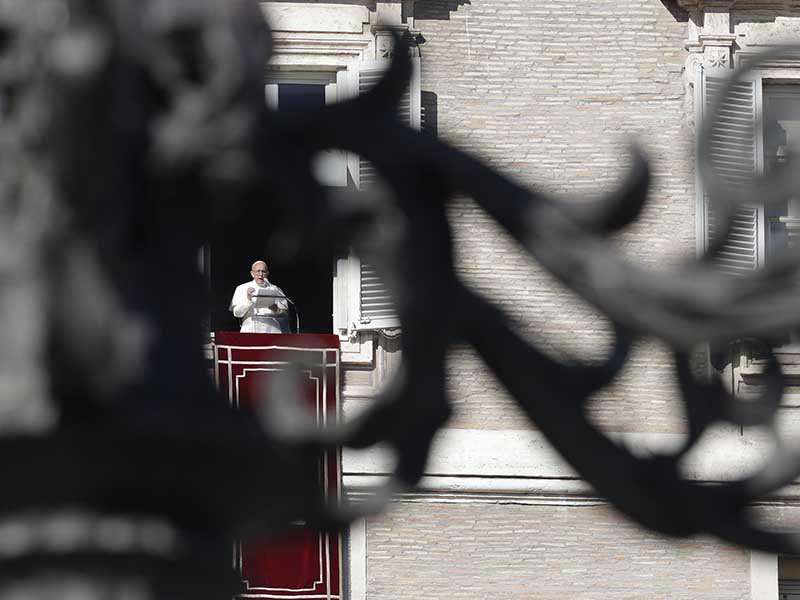 Pope Francis is framed by the decoration of a street lamp as he recites the Angelus prayer at the window of his studio overlooking St. Peter's Square at the Vatican on Nov. 19, 2017. (AP/Andrew Medichini)

When I heard that the Vatican was going to issue a document on economics and ethics, I looked forward to reading it and to recommending it to my friends in think tanks, journalism and academia.

Now that I've read "Oeconomicae et pecuniariae quaestiones" ("Economic and financial issues"), I can't recommend it to anyone.

It is not that I have major disagreements with its conclusions. Though I do wish the document had more to say about corrupt politicians, that's not the reason for my disappointment.

It is simply horribly written.

We've been spoiled, perhaps, by the clarity and beauty of Francis' writing since he became pope. I presumed that the rest of the Roman Curia would follow his example.

Written by the Congregation for the Doctrine of the Faith and the Dicastery for Promoting Integral Human Development, "Oeconomicae et pecuniariae quaestiones" was supposed to give theological backing to Francis' views on the economy. With friends like this, Francis doesn't need enemies.

The problem is not just aesthetic. The issues at the heart of this document are the nuts and bolts of economic equity that Francis has made a major theme, and the teaching here should be clear. Meghan Clark, professor of theology and religious studies at St. John's University, bemoaned the document's lack of "accessibility to students, professors, and business people." She felt this was especially sad because "the document rightly calls for greater attention to ethics and making use of social doctrine in business colleges and universities."

Despite the bad writing, the document does perform two major functions. For one, "it offers a critique of certain aspects of contemporary finance that reflects Catholic Social Teaching's approach to markets: valuable as long as they are yoked to the common good, destructive when not," said Vince Miller, who holds the Gudorf Chair in Catholic Theology and Culture at Dayton University.

Secondly, "it painstakingly grounds this teaching in the thought of John Paul II and Benedict XVI in addition to Francis," Miller added. This is important within the church because it challenges "the shallow, yet effective narrative that Francis is somehow a radical departure on these topics," he said.

While acknowledging that "global economic well-being appears to have increased in the second half of the twentieth century with an unprecedented magnitude and speed," the authors argue that "at the same time inequalities proliferate between various countries and within them."

To address this inequality, the document calls for economic strategies aimed at quality of life for all, not just greater profits. Profit is illegitimate, says the document, "when it falls short of the objective of the integral promotion of the human person, the universal destination of goods, and the preferential option for the poor."

In short, people's well-being ought to come before gross domestic product.

The authors at the Curia also don't accept the dogma that the market is always right. Rather, "markets know neither how to make the assumptions that allow their smooth running (social coexistence, honesty, trust, safety and security, laws, and so on) nor how to correct those effects and forces that are harmful to human society (inequality, asymmetries, environmental damage, social insecurity, and fraud)."

"Oeconomicae et pecuniariae quaestiones" isn't content to make generalizations about the morality of market dynamics, however. Its authors appear to be aware of current debates over financial regulation aimed at protecting the public. The complexity of financial instruments and contracts, it notes, "puts the buyers in a position inferior to those who commercialize these products."

Regulations are important, it maintains, to create healthy interactions that unite freedom with the protection of every person, especially the more vulnerable.

Massive deregulation, on the other hand, "creates space not only for moral risk and embezzlement, but also for the rise of the irrational exuberance of the markets, followed first by speculative bubbles, and then by sudden, destructive collapse, and systemic crises."

The document see dangers in big banks that manage investments along with traditional banking activities. It criticizes questionable activities of financial advisers, who do not put protecting their clients first. The document considers credit default swaps "gambling on the failure of others, which is unacceptable from the ethical point of view."

It discusses the manipulation of interbank loans (LIBOR) and concludes that "the fact that this could have happened impunitively for many years shows how fragile and exposed to fraud is a financial system not sufficiently controlled by regulations."

Offshore banking comes under special condemnation in the Vatican document, noting that it is used to avoid taxes, launder dirty money and hide money stolen from poor countries by corrupt politicians.

These are all crucial, and timely, points. Too bad they are hidden by such bad prose.