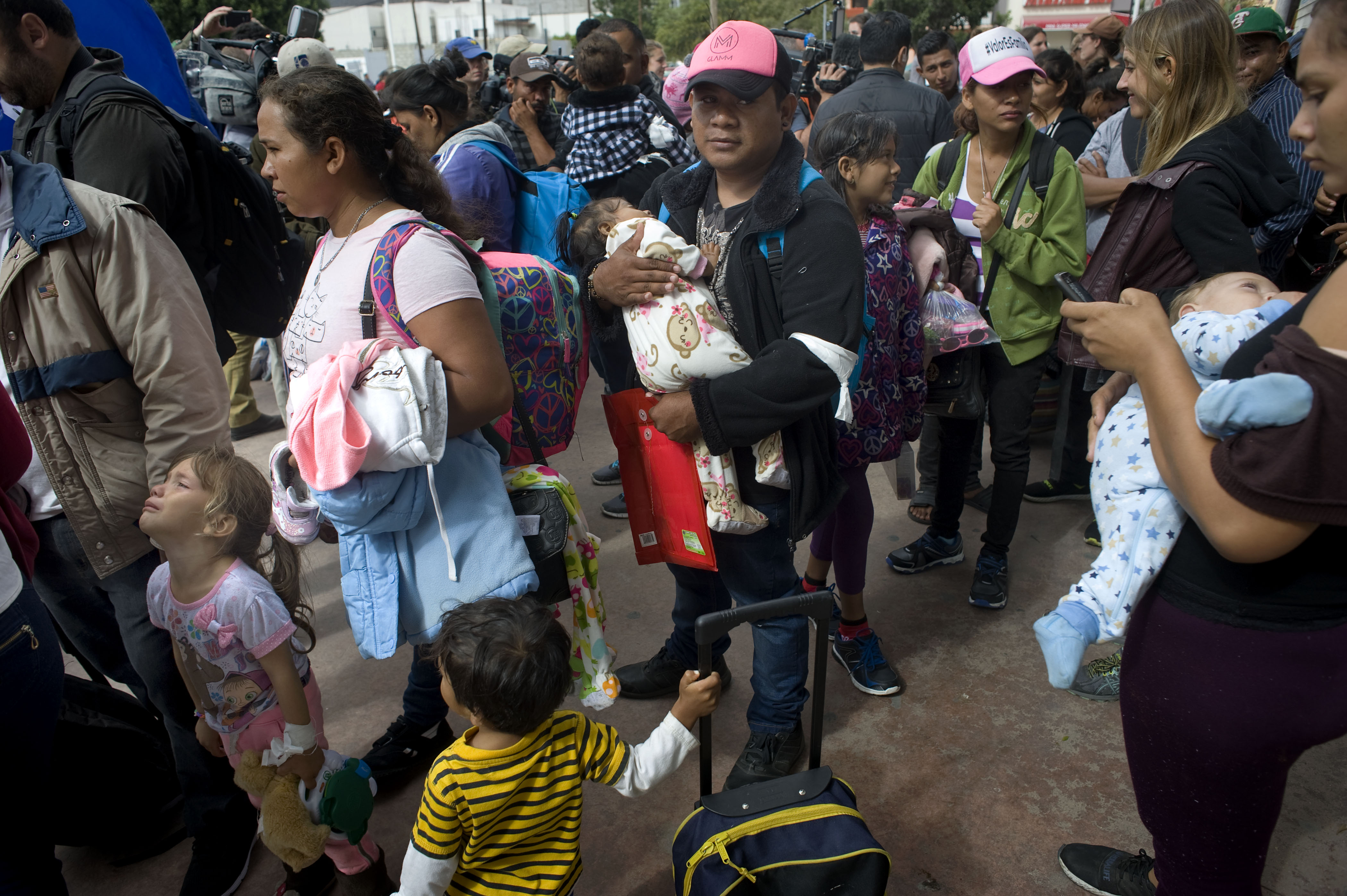 Central Americans wait to present themselves for asylum at the U.S.-Mexico border crossing April 29 in Tijuana, Mexico. (CNS photo/David Maung)

Two weeks ago, news of the separation of children from their parents at the U.S.-Mexico border hit media outlets with ferocity. The family separation policy of the current administration was sending children hundreds of miles away from their parents as they await judgment on the status of their entry and possible deportation. This practice was conflated with news that the government is not properly keeping track of children in the custody of Health and Human Services through their Office of Refugee Resettlement once they are released (often to either relatives or sponsors).

The response by people of faith was immediate, if perhaps somewhat confused and even ill-informed. A call for mass demonstrations in solidarity with migrant families and children went out right away.  Fears that children were being separated from their parents, perhaps indefinitely, without keeping proper records of where they were, tugged at our sense of the integrity of the family, human dignity and human rights. At that point I was seeing too many conflicting reports, and I found it difficult to pinpoint where justice was calling me to act and use my voice in defense of migrants, especially children.

This was a time to remember that asking questions is essential to the moral life. Indeed, the virtue of prudence in the Christian tradition demands that all our moral efforts attempt to incorporate as many relevant facts and circumstances about a situation as possible. Prudence is a virtue that ought to be present in the practice of all other virtues — even faith, hope and charity — because it grounds our moral life in reason and reality. It most certainly is a requisite of a life dedicated to justice for the most vulnerable members of a society, such as migrant children. Thomas Aquinas was so emphatic about the importance of prudence for the moral life that he specified eight different elements that make up this virtue (Summa Theologica, II.II.49).

As deeper reporting on the case of missing children at the border has indicated, it was clear that we did not have complete information, and that our calls for justice at that time were somewhat misguided. I contacted a number of immigration lawyers, scholars and advocates who work closely with families and children. Some immigrant rights advocates, including attorneys representing these "missing" children or the families that took them, observed that it might actually be to the benefit of these children that the Office of Refugee Resettlement couldn't reach the sponsors who have them in custody. Hosts or relatives might not have responded to the contact requests as a way to avoid jeopardizing the children's legal case for asylum or because they were placed in a home with links to other alternately documented relatives. Their general wisdom was that this was a particular area in which control by the government was not necessarily prudent.

What we have learned since these stories broke is that, under the Trump administration, the Department of Justice now treats people reaching the border without proper documentation — even those seeking asylum — as engaging in criminal activity. In these cases, adults are arrested under criminal charges while children are removed from their parents because they are not allowed to stay at criminal detention centers or jails. This practice threatens the unity of families and the mental and physical health of children who are separated, sometimes for months, from their parents.

Asking questions is essential to the moral life. In the case of children at the border, two examples witness to particular ways of asking questions and taking action. The first is Senator Jeff Merkley's (D-Oregon) visits to a detention center and a processing center for children in Texas. Senator Merkley learned that he could only be allowed in if he placed his request with two-weeks' notice. When he was finally able to go into the processing center, he described seeing cyclone fencing structures akin to human kennels, children with no mats or mattresses to rest, no toys, books or any other age-appropriate components. He is now proposing legislation to allow any member of Congress access to these facilities with only 24-hours' notice.

The second example is the action of the group Together Rising in Arizona. Aware that the stories around this crisis were still confusing, they tried to provide as much clarity about the situation as possible. But they were also committed to immediate action, and so they decided to get to know and advocate for the situation of sixty children at one particular facility. While they could not hope to get a handle on the now 10,773 migrant children in U.S. custody, they could attend to the possibility of reunifying these particular 60 children with their parents.

Both of these cases show us particular ways of asking more questions when applying prudence to the task of seeking justice for migrant children.They took stock of where they held influence, power or access. Senator Merkley asked why he was being denied access to a detention center. Together Rising sought to become thoroughly informed about the children in one particular detention center.

We lead our moral lives in particular places where we hold different levels of power and influence, which allows us to ask different sets of questions in order to get to know a situation better. When we know our position, but the conditions do not grant us access, we look to those who do have it — such as our bishops, representatives or news media — and we push them to stay with the issue until we gain access to further knowledge through their concerted efforts.

Both of these situations sought to focus a national crisis at a local level. While we know that nearly 11,000 migrant children are currently in U.S. custody, we also know that they are in 100 detention centers in 14 states. This reality should prompt us to ask a host of questions:

What are the questions that you are being led to ask right now to be an effective agent of Christ among these most vulnerable of our sisters and brothers?

This story appears in the Families Separated at the Border and Theology en la Plaza feature series.