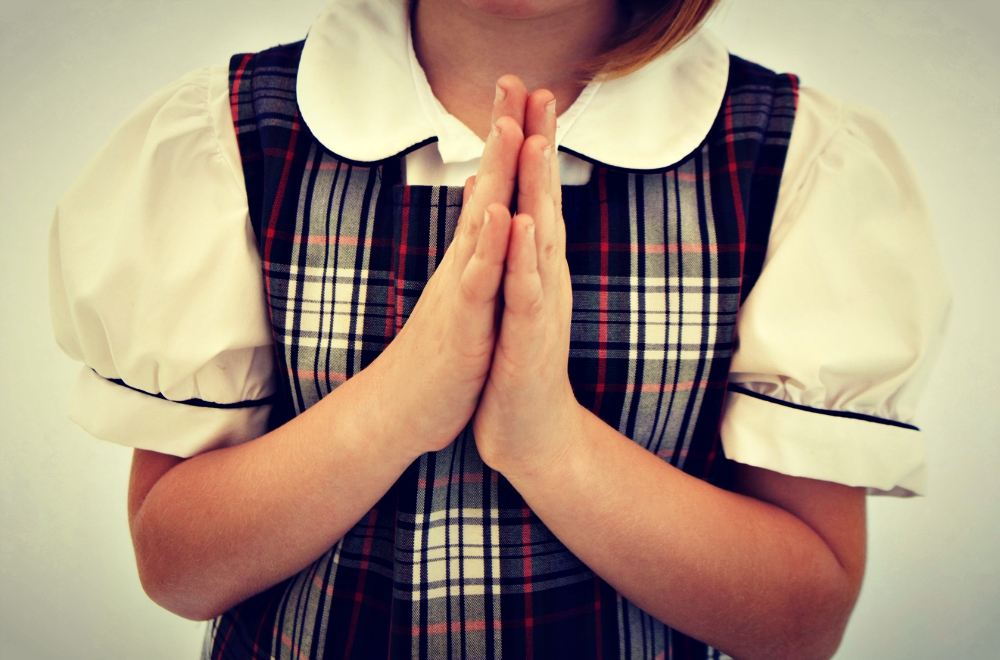 A couple of years ago, I became friends with Sister Emmanuelle, who is a spry 80-something Carmelite nun. Each time I see her, this petite woman in her tea-length brown habit, her face beaming and her arms wide for a hug, I feel my own smile radiating from my face, down my neck, into my chest, and deep through me, all the way back to my childhood.

You see, I was one of those kids whom other kids at St. Euphrasia Elementary School called a "teacher's pet," and a "brownnoser." I assumed when those epithets were flung at me that the latter one referred to the color of our Carmelite nuns' habits. Though I would later figure out that phrase's actual intended meaning, I like my version better.

I surmise that the other kids assumed I was being nice to the nuns who ran our small parochial school in Granada Hills, California, because I sought their favor. The truth of it is that I just hung out with old ladies a lot, and was keenly aware that I would be one someday.

I had long considered my two best friends in the world to be my Nonna (my Italian grandmother) and my great-aunt Alice, who were 50 and 60 years older than me, respectively. I felt most comfortable in Nonna's kitchen up in Lancaster, California, when her green Formica table was surrounded by ladies with white hair, pink skin, and wide smiles.

My aunts Ella and Babs and Rose (Alice's sisters) and Bina and Polly (Nonna's younger siblings), and their friends, would congregate there, and eat and talk and laugh. My chubby little girl self was drawn into that soft, warm, funny circle like a moth to a flame.

I remember when I was about 4 or 5 years old, I was leaning as close into their midst as I could, tucked against my aunt Alice's leg, feeling her warmth through her flowered house dress. I heard them talking about a thing called reincarnation, debating about whether they would come back in other lifetimes, and what or who they would be. They seemed to be cooing and clucking with more naughtiness than usual, and I would only understand when I was older that this must have been scandalous talk for a bunch of Irish and Italian Catholic ladies.

I stepped back, put my hands on my chunky hips and announced, "I don't know about you girls, but I am not coming back here!"

Alice put her large hand on my shoulder and pulled me close. Her dark eyes twinkled as she said, "Ladies, we seem to have an old soul among us."

That may be true, because at every age, I have easily pictured myself as being in the arc from birth to death, that undeniable advancing of the seasons of our bodies, from youth to old age. I was and have always been a little old lady waiting to happen.

I guess that's a long way to explain that I couldn't look at our Carmelite nun teachers as "them" and at my peers as "us." I knew we were all in this together.

And looking back, I can easily imagine these hard-working ladies in brown, gathering in their convent after school, chuckling at what we assumed in the arrogance of our youth to be clever and original shenanigans.

I can still clearly picture our second-grade teacher Sister Fatima, as she went around the room, asking each girl and boy what they wanted to be when they grew up. From the boys, the answers were things like "baseball player," "fireman," "doctor." The girls up and down the rows of desks replied most often with "nurse" and "teacher" and "mommy."

When Sister Fatima got to me, I smiled brightly up at her and announced loudly, "I want to be a stripper!"

I knew instantly by the look on her round face that I was in trouble. When she grabbed my ear and pulled me out of my desk, and dragged me towards the classroom door, there was no question.

But I didn't understand why.

You see, the night before, I had watched the 1962 movie musical "Gypsy" on television. As Louise, played by Natalie Wood, slowly pulled off those long gloves and sang "Let Me Entertain You," I was captivated not only by her beauty and glamour, but by the mysterious power her femininity held over the audience, including me. Of course, I wanted to be her.

Sister Fatima hauled me past the third- and fourth-grade classrooms, and around the corner to the principal's office. She sat me down hard on the chair outside Sister Rosalita's door, and I can still keenly remember the churning in my stomach. For while in general I had warm feelings for older ladies, our principal was a tall figure of dark discipline. I looked down and the hem of my plaid uniform jumper was quivering between my shaking knees.

I was left sitting there, mulling my impending doom. I was able to make out that they were calling my mother on the office phone. Sister Rosalita's voice was deep and intimidating, even through her office door.

Now, when I was 7, I had three younger brothers, Tim, Joe and Tom, who were then 5, 3 and brand new, respectively. Tim was in kindergarten, but I knew my mom would have to hustle the two younger ones into the station wagon, and roar towards school, all on account of me. And while I still didn't understand what I had done wrong, this escalation into parental involvement made it clear that this could not possibly end well.

Sister Fatima was sent back to our classroom, giving me a look of disgust as she swept by. Sister Rosalita emerged silently behind her, her great brown self settling behind the empty desk across the room. She kept her head down, and her large hands slowly moved the papers in front of her. I stared at her face, hoping for some glimmer of hope. But she never looked up. The only sound in the room was the rustling of paper, and the clock on the wall, ticking ominously

The perhaps 15 minutes it took for my mom to arrive seemed vastly longer. I just tried to remember to breathe, as I awaited my fate.

When my mom showed up in the doorway, Joe stumbling behind her and Tom on her hip, I was relieved. And then I remembered I was still in trouble. There were a lot of feelings, all at once. Being 7 is hard.

Sister Rosalita greeted my mom, and motioned for her to come into her office. My mom put Tom in my lap, and Joe moved in, tight against my leg, smiling up at me. My mom gave me a sidelong glance as she followed the nun. She was clearly not pleased.

As the door closed, and I looked down at my brothers' faces, I felt wistful. I loved these short guys a lot. It was too bad their only sister was about to die, or at the very least, be excommunicated and banned for life. I hoped they would remember me fondly, someday. Ah, the sweet drama of it all.

Now our Mom was far from perfect, harried by the four of us, with a short temper, a whip-like smacking arm, and a vocabulary when angry that would make sailors blush. But I will give her credit for being smart, and funny, and not suffering fools lightly.

From behind the door, I heard Sister Rosalita's deep grumble of a voice, and then a glorious thing. My mother's rifle-crack laugh.

The door swung open, and my mom walked towards me, reaching for the baby. She was laughing, and Sister Rosalita's face behind her showed both confusion and the attempt to find some humor in the situation.

"Come on now. I mean really," my mom said as she bent and lifted Tom out of my lap, with an oof of hefting his chunky body. She settled him on her hip and looked back at our principal, "Amy is not going to be a stripper! It was just a movie. A movie!"

Mom shook her head, as if shaking off the silliness of it all, and held her hand out for Joe. He grabbed it, and they moved out the door. She stopped and turned to me, her green eyes narrowing, "Don't say that again, Amy. Make something else up, but not that. OK?"

I understood her question to be an order. I just nodded, gratefully. I waved as my family disappeared around the corner, then looked up at Sister Rosalita. Her face still registered mostly confusion, and she dismissed me with a shake of her hand. "Back to class with you now, young lady."

I trudged alone towards my classroom. I still didn't understand what I had done, but I did fully comprehend I had been miraculously reprieved by my mom.

The glamour of Gypsy Rose Lee, and her "Gotta Get a Gimmick" colleagues still dripped from my memory like brightly colored feather boas. I still wanted to be them when I grew up. But I had just learned that for some reason, I was not supposed to talk about it. I sniffed philosophically. Another life lesson learned. No wonder the nuns called 7 the "age of knowing." It was heady stuff.

These days, when I get the chance to visit Sister Emmanuelle, and she hugs me with so much joy and love, I find myself hoping that those other Carmelite sisters had a good laugh that night in the convent. And maybe even that the next time "Gypsy" was on TV, they watched it together. I imagine them discreetly tapping their toes with the music under those brown robes, their shoulders shimmying ever so slightly.