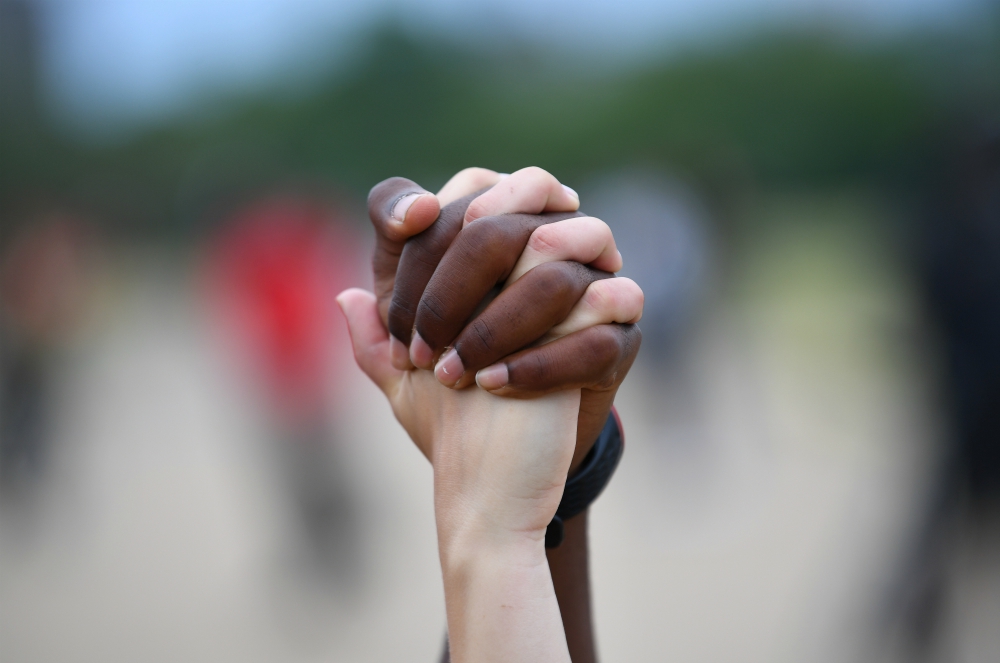 On March 13, I boarded a plane at St. Louis' Lambert Airport, bound for Boston, to be with my family. I intended to visit with my parents and brother for one month to find peace, rest and love during a challenging time in the place where I grew up. I went home to comfort and be comforted.

I went home to breathe.

I am reading Fr. Bryan Massingale's words while sitting on a blanket in my parents' wooded backyard. There are birds chirping all around me: a blue jay, a cardinal and an oriole. In my mind's eye, I see Amy Cooper in Central Park. We see each other.

Massingale writes of Amy Cooper's "breathless voice," and I'm moved to put out my cigarette. (Addiction and cancer run in my family.) I lie on my back and stare into a blue-laced canopy of green and recall a short poem I wrote and posted on Facebook after a summer 2017 trip to the city, where I'd watched the Unite the Right rally unfold from a Brooklyn apartment.

My dad is from New York City and my family has taken many trips there. The most recent was Thanksgiving weekend in 2019, when my dad gave my friends and me tickets to a tour of Seneca Village. Seneca Village was Manhattan's first significant settlement of black property owners and the site of three churches: the AME Zion, African Union Methodist and All Angels churches. All Angels was a racially integrated church where Irish and black parishioners are said to have worshiped together in the mid-1850s. Seneca Village was destroyed to make way for the construction of Central Park.

"Amy Cooper holds the key," writes Massingale. He uses her actions to show us liberal white Catholics that we have designed and benefited from systemic racism and must be brave in confronting it. He is very clear about how we can get serious about advancing to racial justice:

As I think more about this question of who "holds the key," I recall another trip to the city in 2018, for the "Heavenly Bodies: Fashion and the Catholic Imagination" show. I think about how the Metropolitan Museum of Art has a $3.6 billion endowment. How it was established in 1870, at the end of the Reconstruction Era, at the same time that local Ku Klux Klan chapters were waging devastating violence on black Americans to suppress the effects of the ratification of the 15th Amendment.

The exhibit was breathtaking. Among many other publications, the New York Post praised it, writing: "Art lovers already know the Metropolitan Museum is heaven on Earth. But its new exhibit … should convert everyone else." I remember walking through those museum halls seeing bejeweled scepters, velvet gowns and gold leaf vignettes. And then, I see myself smoking on a Central Park bench outside the Met, giving another Amy Cooper a friendly nod as she walks her dog.

In 2016, I listened to Ta-Nehisi Coates read "The Case for Reparations." I was moved, but did not make a tangible commitment to dismantling racism in myself and the systems I participate in for another three years. I chose not to, not despite my faith and the generational wealth of my family, but because of it.

Now I would like to offer two concrete anti-racist actions that I have committed myself to, as a white person of faith. I believe these are essential and complementary regular practices that we white people can engage in if we are to get serious about racial justice:

The "Catholic imagination" is about seemingly timeless power and privilege, about manifest destiny, genocide and sexual abuse. Yet, this same cultural imagination also holds humility, justice and deep faith. The white Catholics I know and love may be conflicted, but we are also resourceful, principled and brave.

As Massingale so poignantly writes, "Therein lies the hope. And the challenge." If white Catholics are able to have faith in the magical power of the Eucharist, if we are able to still find God in 2020, then we are capable of dedicating ourselves to social transformation in solidarity with people of color.

[Adele Maura McKiernan is a graduate of the University of Wisconsin-Madison, where they studied history and integrated liberal studies. They are now a second-year Loretto volunteer in St. Louis working at Missouri Health Care for All, as a grassroots organizing fellow.]