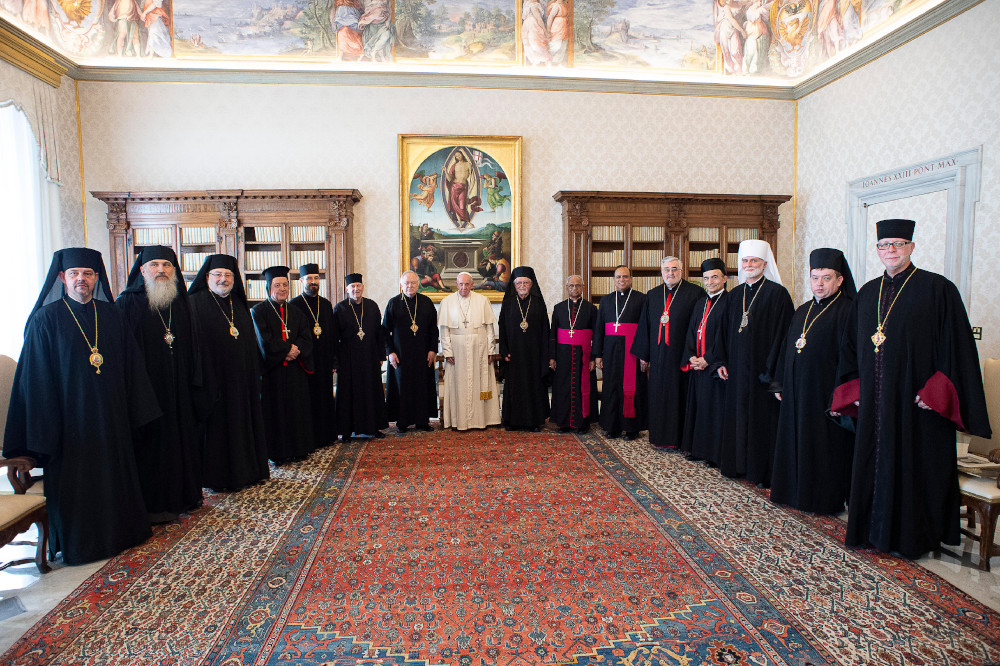 Pope Francis poses for a group photo during a meeting with U.S. bishops from the Eastern Catholic Churches in the United States during their "ad limina" visits to the Vatican Feb. 20, 2020. (CNS/Vatican Media)

When the U.S. bishops began their "ad limina" visits in early November, many of them were wearied by dozens of challenges, but especially a sense of responsibility for the victims of clerical sexual abuse and knowing how they and their brother bishops failed so many of them.

In interviews with Catholic News Service in Rome, none of the bishops said they found concrete answers. But they did find Pope Francis understood what they were going through and offered his support. And that clearly surprised many of them.

The timing of the "ad limina" visits after more than a year of coming to grips with new abuse scandals — including the Pennsylvania grand jury report and the case of Theodore E. McCarrick, the former cardinal — was "very providential, a sign of God's love for us," Archbishop William E. Lori of Baltimore said in December.

Over the course of four months, Francis met with almost every U.S. bishop, spending two to three hours with them in groups that were as small as 12 bishops and as large as 37.

Before settling in for the conversations, the pope typically told the bishops where they could find water and where the restrooms were. Then he told them he was in no hurry and that he would respond to any questions, concerns or even criticisms.

If the bishops did share criticisms of the pope in those 14 sessions, they did not tell CNS about it. However, bishops in several groups asked Francis when he intended to release the promised Vatican report on how McCarrick, the former cardinal and archbishop of Washington, was able to advance so far in the church despite apparent allegations of sexual misconduct and even sexual abuse of minors.

Bishop Joseph E. Strickland of Tyler, Texas, met the pope in January and said he was one of the bishops who brought up the McCarrick report.

"I honestly was a little nervous bringing up, as I said, a wound, a wound for the church, a wound for him (Francis) as the Vicar of Christ, a wound for each of us as bishops," he said. "But I was glad I brought that up, because he really did provide some insight" and made the bishop "realize it's always a bigger picture than maybe the slice that you're looking at."

Francis told members of each group that a bishop must be close to God, close to his priests and close to his people. And, part of the way through the "ad liminas," he began talking about the importance of bishops being close to one another.

While describing the U.S. bishops as having differences of opinions, rather than divisions, many bishops said the pope's words made them reflect on the degree to which the polemical and even nasty political climate in the United States is cropping up in media and social media conversations among Catholics as well.

"We're not a bunch of robots or puppets," said Bishop Richard F. Stika of Knoxville, Tennessee. "We are not divided; we just have different life experiences" and are trying to meet different pastoral needs.

Talking about Francis' influence on the world stage and, especially, on the policies of President Donald Trump, Bishop John M. Botean of the Ohio-based Romanian Catholic Eparchy of St. George said, "To have any leverage with the administration or with the U.S. government in general, the U.S. bishops have to have his (the pope's) back, big time. And I don't want to judge what the situation of that is, but I don't suppose it's what it could be."

"Do we have differences among ourselves?" The answer is obvious, Lori said. "Brothers have differences. Sometimes brothers fight and argue." But "as I listen to bishops talk about their dioceses, I see they are really trying hard to bring the themes of this pontificate and the emphases of this pontificate into their dioceses in very practical ways."

Other common topics, the bishops reported, included youth and young adult ministry, being joyful witnesses of the Gospel, creating a more welcoming environment for migrants and refugees, abortion and the sanctity of all human life, ministry among Native Americans, racism, safeguarding the environment, the growing Spanish-speaking Catholic population and the importance of Catholic schools.

The New York bishops' meeting with the pope Nov. 15 "was intense, in terms of the painful situations we shared," said Bishop Edward B. Scharfenberger of Albany. A few weeks after meeting the pope, he was appointed apostolic administrator of the Diocese of Buffalo after Bishop Richard J. Malone resigned in the wake of criticism about how he handled abuse allegations.

One of the bishops in the New Jersey and Pennsylvania group told the pope "how ashamed his priests are of what went on in the States: the accusations of sexual abuse and cover-up," Cardinal Joseph W. Tobin of Newark said after his November visit.

And the pope told the bishops he knew what that felt like because, "he said, 'It's happened to me,'" the cardinal said. The pope talked about walking past a child who was playing "and the parents sheltered the kid and said, 'You have to be careful, there are child molesters around.' He felt that, so he knows what it's like."

The visits "ad limina apostolorum" — to the threshold of the apostles — are organized around the celebration of the Eucharist and prayers at the tombs of Sts. Peter and Paul. But they also include a packed schedule of meetings with the top officials of various offices of the Roman Curia and the Pontifical Commission for the Protection of Minors.

Many bishops said some of those Curia meetings used to feature lectures or even finger-wagging about things the bishops should be doing or should be doing differently. That has changed under Francis and the leaders he has chosen for the various dicasteries, many said.

"They listened," said Bishop Lawrence T. Persico of Erie, Pennsylvania. "We were not treated like lower-management people."

Of course, the key moment for most of the bishops was the multihour meeting with the pope.

"He wanted to talk to us as a brother, as a brother bishop," said Bishop William A. Wack of Pensacola-Tallahassee, Florida. And, responding to questions, he used stories and examples from his time as an auxiliary bishop and cardinal archbishop of Buenos Aires, Argentina.

"That's really touching because he wasn't just telling us what we should do or saying, 'It's going to be OK,' but he was saying, 'These are difficult times and sad times, but we must be strong,'" Wack said.

All the meetings focused on and flowed from a shared faith, said Archbishop Jose H. Gomez of Los Angeles, president of the U.S. Conference of Catholic Bishops, who made his visit in late January.

"For us bishops, and for everybody," he said, "I think it's important to never forget that we are disciples of Jesus Christ and that we are called to bring the beautiful message of our Lord to the people of our time."