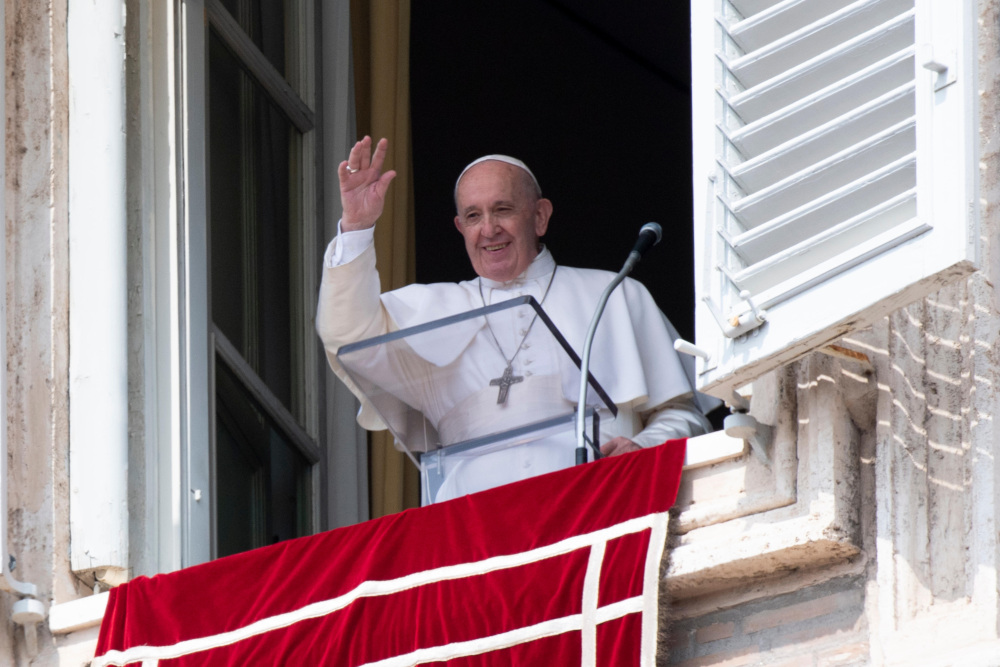 Pope Francis greets the crowd as he leads the Angelus from the window of his studio overlooking St. Peter's Square at the Vatican Sept. 1, 2019. (CNS/Vatican Media)

After listening to indigenous people and church leaders at the Synod of Bishops on the Amazon, the Catholic Church cannot remain indifferent to the suffering of the region's people, Pope Francis said.

"The cry of the poor, together with that of the earth, came to us from the Amazon," the pope said during his Sunday Angelus address. "After these three weeks, we cannot pretend that we have not heard it."

The pope shared his thoughts about the synod Oct. 27 as he greeted pilgrims in St. Peter's Square; he had just finished celebrating the synod's final Mass.

The synod, he said, was a time of "a walking together," engaging in sincere dialogue "without hiding difficulties and "experiencing the beauty of going forward united."

Francis told the crowd that in the second reading at the day's Mass, St. Paul, aware of his imminent death, expressed hope that "through me the proclamation might be completed."

St. Paul's last wish, the pope said, was not for himself but that the Gospel "be proclaimed to all nations."

During the synod, he continued, participants reflected on how to open new paths of evangelization.

"We felt spurred on to go out to sea, to leave the comfortable shores of our safe harbors to enter deep waters," the pope said. "Not into the marshy waters of ideologies, but into the open sea in which the Spirit invites us to throw our nets."

Before leading pilgrims in reciting the Angelus prayer, Francis prayed for the intercession of Mary, "Queen of the Amazon," who "became that not by conquering, but by inculturating herself."

"With the humble courage of a mother, she became the protector of her children, the defense of the oppressed; always going to the culture of the people," the pope said.

Francis did not specifically mention the statues of the naked pregnant woman that some people referred to as Our Lady of the Amazon, but which Vatican officials repeatedly described as an image signifying life. Others described it as "Pachamama" and condemned it as an idol. Some copies of the statue were thrown in the Tiber River, but recovered by police.

"There is not a standard culture, there is not a pure culture, which purifies the others," Francis said. "There is the pure Gospel, which is inculturated. To her, who in the poor house of Nazareth took care of Jesus, we entrust the poorest children and our common home."