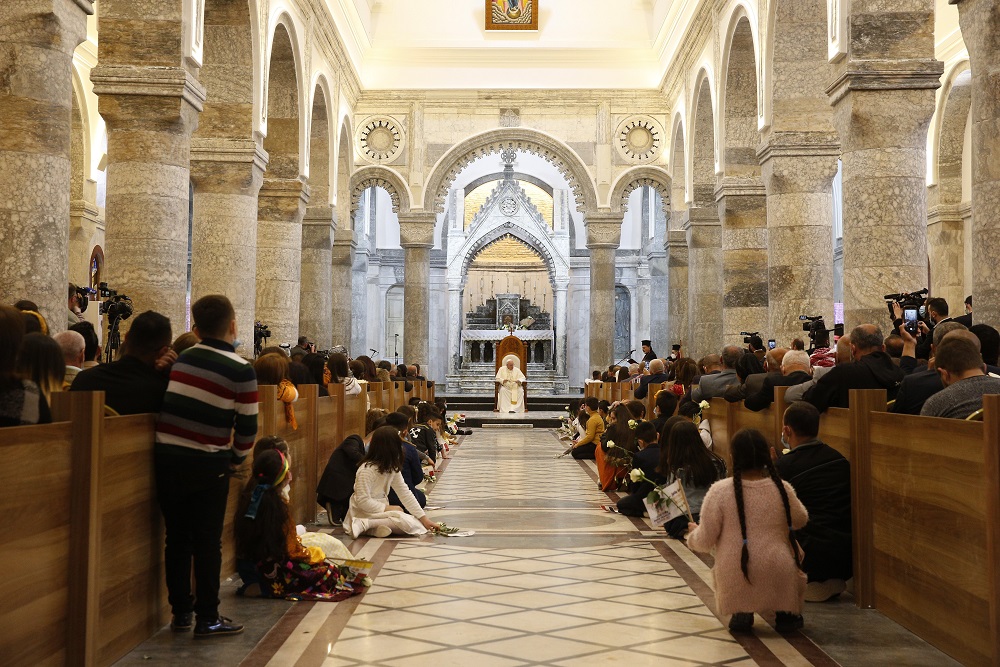 Pope Francis visits with the community at the Church of the Immaculate Conception in Qaraqosh, Iraq, March 7, 2021. (Paul Haring/CNS)

Pope Francis on March 8 defended making a historic trip to Iraq despite the possibility of spreading the coronavirus in the country, saying he was "aware of the risks" but hoped God would help protect people from infection.

In a press conference aboard the papal flight back to Rome after the three-day visit, the first of a Catholic pontiff to Iraq, Francis said he was undecided about the trip but then prayed at length. He said the decision ultimately came to him "from within."

"I prayed a lot about this," the pope told the journalists. "And in the end, I took the decision, freely."

"It came from within," Francis continued. "I said: 'The one who allows me to decide this way will look after the people.' "

"I took my decision like that," he said. "But after prayer, and after being aware of the risks."

Francis also responded during the press conference to conservative Catholics who criticize his focus in recent years on pursuing Christian-Muslim dialogue, saying he was only following the path set out by the 1962-65 Second Vatican Council.

The pope said he knew he might be criticized for having a first-of-its-kind meeting in Iraq with Grand Ayatollah Ali al-Sistani, one of the world's most influential Muslim clerics. He said some may call him "reckless" or accuse him of "taking steps against Catholic doctrine."

"These are the risks," said the pontiff. "But these decisions you take always in prayer, in dialogue, asking for counsel."

"It's not a whim," Francis said of his path of dialogue. "And, also, it is along the line that the council taught us."

Francis' March 5-8 trip to Iraq included visits to six cities throughout the country. It was focused both on Christian-Muslim dialogue and encouraging the country's dwindling Christian community, which was persecuted by the brutal terrorist regime imposed by the Islamic State group in parts of the country from 2014 to 2017.

Although the Vatican and local organizers had said stringent social distancing and masking protocols would be being put in place for each of the events during the trip — Francis' first in 15 months due to the pandemic — those measures appeared stretched thin at several points during the visit. 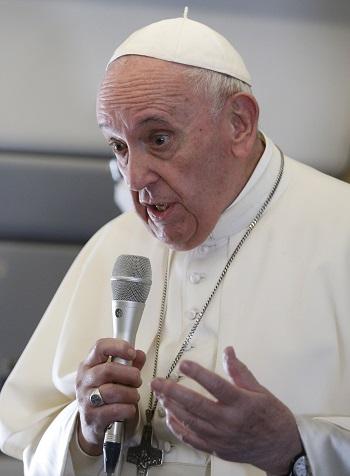 Pope Francis speaks with journalists aboard his flight from Baghdad to Rome March 8, 2021. (Paul Haring/CNS)

A March 6 Mass at Baghdad's Chaldean Cathedral of St. Joseph, for example, featured about 250 people gathering in an enclosed space. Although most wore masks, they were seated less than 6 feet apart. When the pope visited Qaraqosh March 7, mostly mask-less crowds packed together on city streets for blocks in hopes of seeing him.

The pope and those traveling with him had been vaccinated by the Vatican ahead of the journey.

Francis told the journalists March 8 that in considering whether to visit any country he takes time to listen to advice and pray.

"And then the decision comes from within," said the pope. "It comes, spontaneously, but like a mature fruit."

In choosing whether to go to Iraq, Francis said he considered "all the problems, many. But in the end, the decision came and I took it."

Francis said his meeting with Sistani, whom many Iraqis consider an influential political and spiritual voice, "did good for my soul." The pope said that during their 45-minute encounter he felt he was with "a great man, a wise man, a man of God."

Some of the most dramatic moments of Francis' trip to Iraq came March 7 when the pontiff visited Mosul and Qaraqosh, two cities that had been overrun by the so-called Islamic State group and largely destroyed by the terrorists.

Francis said his visit to a square in Mosul containing the sand-colored brick rubble of four destroyed churches left him unable to describe his feelings. "I do not have words," he told the journalists. "It cannot be believed."

The pope said he primarily wanted to ask how Islamic State group fighters had obtained the weapons capable of causing such destruction. "Who sells the arms?" he asked. "Who are those responsible?"

Asked about where he might travel abroad next, Francis said he had committed to going to Hungary in September for the International Eucharistic Congress, which was meant to be held in 2020 but was postponed due to the pandemic.

The pope said he had also made a promise to visit Lebanon, but was not sure when that might be possible due to the country's continuing political crisis.

Francis confessed, however, to feeling "much more tired" in Iraq than he had on his 32 previous visits abroad. "The 84 years do not come alone," he said, in an apparent reference to his suffering from sciatica, a painful back condition that now forces him to limp.

One journalist recalled to the pope, now in the eighth year of his papacy, how he had said in 2015 that he expected to have a short pontificate. Francis only smiled in response, holding out crossed fingers.

This story appears in the Pope Francis in Iraq feature series. View the full series.
A version of this story appeared in the March 19-April 1, 2021 print issue under the headline: On papal plane, Francis defends traveling to Iraq during pandemic.