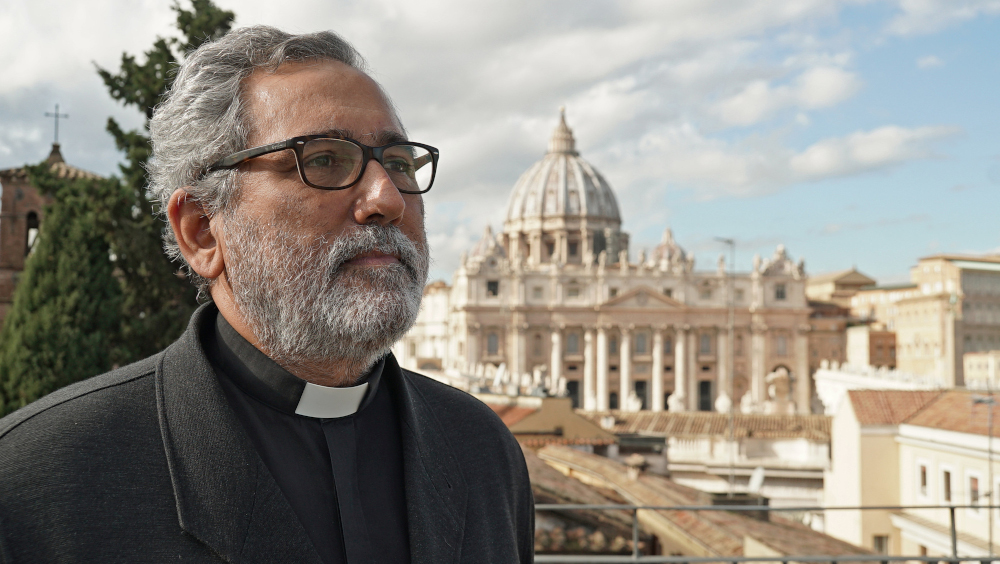 Jesuit Father Juan Antonio Guerrero, prefect of the Vatican Secretariat for the Economy, is pictured in an undated photo. Father Guerrero said that although hard times are ahead, the Vatican is not in risk of default. (CNS/courtesy Society of Jesus)

Although the Vatican is facing difficult years ahead due to the economic fallout of the coronavirus pandemic, its budget is not facing a massive default, said the prefect of the Vatican Secretariat for the Economy.

In an interview with Vatican News published May 13, Jesuit Father Juan Antonio Guerrero, the prefect, denied reports claiming that an internal analysis given to Pope Francis places the Vatican's annual deficit at risk of growing 175%.

"The Vatican is not in danger of default," Guerrero said. "That doesn't mean that we are not naming the crisis for what it is. We're certainly facing difficult years" ahead.

The Italian newspaper Il Messaggero published May 10 what it claimed was an internal analysis given to the pope during a recent meeting with the heads of the Roman Curia. The documents highlighted scenarios from best to worst case should revenues continue to decline drastically.

The article also stated that the pope advised curial heads to be frugal, freeze the hiring of new employees, eliminate superfluous costs and to not make new trips or organize new conferences.

When asked about the pope's meeting, Guerrero said the Vatican is determined "to find a way to ensure our mission" and determine "what is and what is not essential." However, "our economy cannot be completely measured merely in terms of deficit or cost."

"We are not a business, we are not a company," he explained. "Our objective is not to make a profit. Every dicastery, every entity performs a service. Every service has associated costs. Our approach must be the maximum sobriety and the maximum clarity. Our bottom line is in view of mission."

Since the church carries out its mission thanks to the offerings of the faithful, he said, the Vatican must "manage our finances with the passion and diligence of a good family man."

Nevertheless, "there are three things that are not in question, not even in this moment of crisis: employee salaries, aid for people in difficulty and support for the churches in need. No cut will affect those who are most vulnerable," he said.

The church, Guerrero added, does not "live to balance budgets" and trusts "in the generosity of the faithful." However, the church must also do its part to "show those who donate part of their savings to us that their money is well spent."

"There are many Catholics in the world who are willing to donate to help the Holy Father and the Holy See fulfill their mission," he said. "It is to them that we must make an accounting."

The head of the Secretariat for the Economy also noted that the Vatican's finances are comparably less than other countries and even "less than the average American university, for example. This, too, is a reality that is often ignored."

"Between 2016 and 2020," he said, "both income and expenses have been constant: revenue, in the region of 270 million (euros), expenses averaged around 320 million, depending on the year."

Regarding the best- and worst-case scenarios for the Vatican's finances, Guerrero said that "the most optimistic scenario calculates a 25% decrease in revenue" while "the most pessimistic (averages to) around 45%."

A major source of revenue, he said, comes from the Vatican Museums, which, like every museum in Italy, "is closed now and will most likely remain in difficulty due to a slow recovery."

"We had already decided, when approving this year's budget, that expenses should be reduced in order to reduce the deficit," he said.

"Both the optimistic or pessimistic scenario depend partly on us — on how much we will be able to reduce costs — and partly on external factors, on how much the revenue will actually decrease; revenue does not depend on us," Guerrero said. "In any case, unless there is some extraordinary income, it is clear that the deficit will increase."