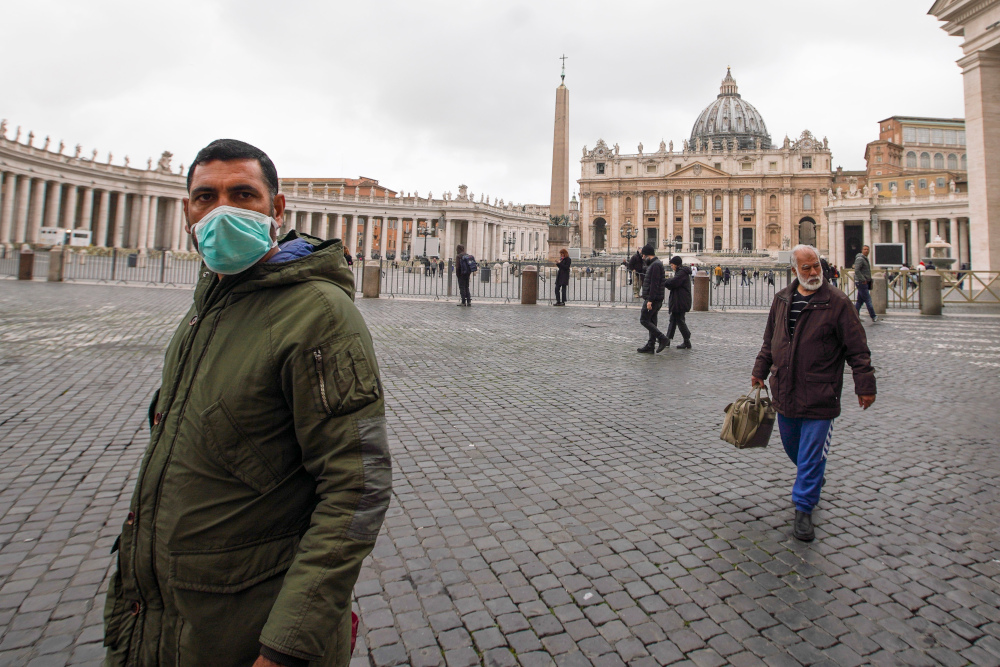 A man wearing a mask walks in St. Peter's Square at the Vatican, March 6, March 6, 2020. A Vatican spokesman has confirmed the first case of coronavirus at the city-state. Vatican spokesman Matteo Bruni said March 6 that non-emergency medical services at the Vatican have been closed so they can be sanitized following the positive test on Thursday. (AP/Andrew Medichini)

The Vatican confirmed the walled city-state's first case of the new coronavirus March 6 and closed some offices as a precaution while Pope Francis continued recovering from a cold.

A health clinic inside Vatican City was closed for sanitizing following the positive test result received March 5, Vatican spokesman Matteo Bruni said. Vatican employees and their families are eligible for health care at the clinic.

One Vatican official was put into a protective quarantine after a priest from France's Catholic church in Rome tested positive for the virus. The official isn't showing symptoms of COVID-19 disease but lives in the same church as the infected priest.

The Vatican Apostolic Library said it would keep its doors shut all next week as a precaution. The library welcomes scholars from around the world to consult the Vatican's manuscripts and archives.

Francis came down with a cold over a week ago, and the Vatican has said that he has no other pathologies. The 83-year-old pope, who lost part of one lung to a respiratory illness when he was a young man, canceled his participation at a week-long spiritual retreat in the Roman countryside as a result.

Bruni said this week that the pope's recovery from the cold was proceeding well, and that he continued to celebrate daily Mass, receive visitors privately and perform other spiritual exercises.

Francis however canceled several official engagements in the last two weeks, as coronavirus spread from northern Italy to other parts of the country, including Rome, albeit in much smaller numbers.

It remains unclear how upcoming activities for Holy Week leading up to Easter Sunday on April 12 might be affected. Francis would normally preside over the Way of the Cross procession at the Colosseum on Good Friday and deliver a tradition ''Urbi et Orbi'' (''to the city and to the world'') Easter Day message in St. Peter's Square.

Church doors have been closed for Mass in the northern Veneto and Lombardy regions, as part of measures to prevent further contagion, and on Thursday the Italian bishops conference recommended weekday Masses be canceled nationwide.

The Italian government has ordered all sporting events to take place without spectators and has urged the cancellation of all mass gatherings. As a result, it is likely that the pope's general audiences will be canceled. In addition, given Francis' age and health condition, under government measures advising the elderly to avoid going out, the pope should stay home and limit visitors.