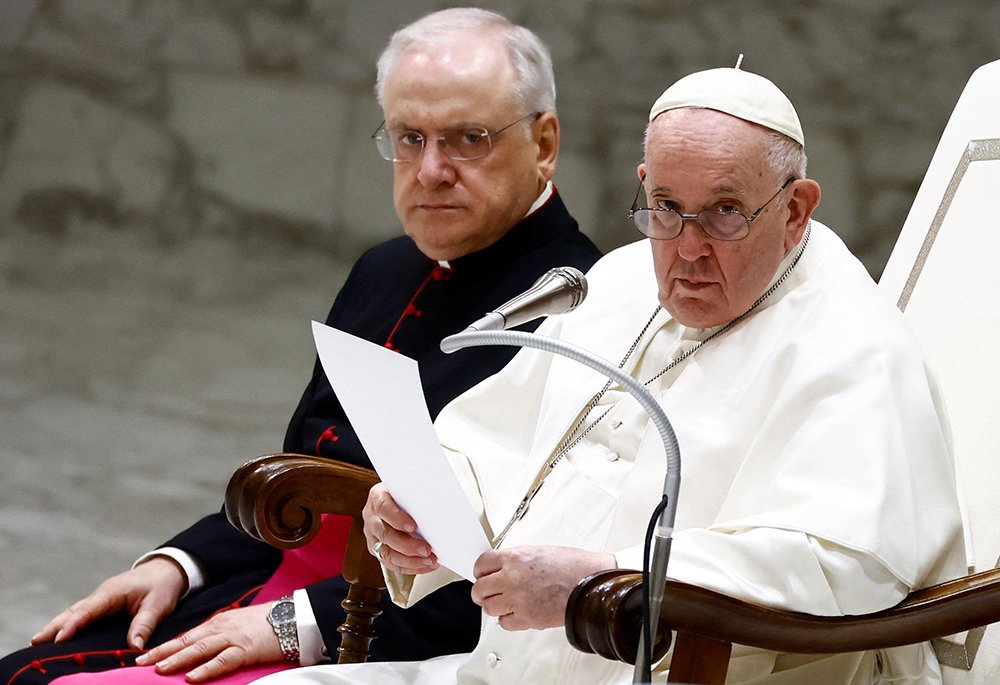 Pope Francis has condemned the criminalization of homosexuality, becoming the first Roman pontiff to officially back the repeal of such legislation in countries where it exists, saying that the Catholic Church must work towards an end to what he described as "unjust" laws.

"Being homosexual is not a crime," he said in an exclusive interview with The Associated Press released on Jan. 25. "It's not a crime. Yes, but it's a sin. Fine, but first let's distinguish between a sin and a crime."

The pope's remarks came in an extensive interview in which the pope also weighed in on a number of high-profile clergy abuse cases, criticism from conservative cardinals, and his personal health.

Francis said that bishops in countries that support criminalizing homosexuality "have to have a process of conversion," and apply "tenderness, please, as God has for each one of us."

More than 60 countries and jurisdictions, especially in Africa and the Middle East, criminalize consensual same-sex sexual activity, with 11 allowing for the death penalty for violating such laws.

In the new interview, the pope referred to the official Catechism of the Catholic Church, which says gay people should not be marginalized or excluded from society. Since the start of his papacy, Francis has walked a tightrope on LGBTQ issues, repeatedly saying that the church should offer greater welcome to gay people, while at the same time approving a 2021 Vatican decree forbidding priests from blessing gay couples.

"We are all children of God, and God loves us as we are and for the strength that each of us fights for our dignity," Francis told AP.

The pope was asked about the popular Slovenian Jesuit artist Fr. Marko Ivan Rupnik and the retired East Timor Bishop Carlos Filipe Ximenes Belo. Although their cases are quite different, both were recently revealed to have been quietly disciplined by the Vatican following reports of abuse or misconduct.

The global Jesuit order restricted Rupnik from ministry in December, but only later acknowledged the priest had previously been excommunicated in 2019 after absolving an adult woman of having engaged in sexual activity with him.

Francis denied that he had intervened in the case of his fellow Jesuit.

When the Rupnik scandal initially erupted in December, it was revealed that the Vatican's doctrinal office, which is led by Spanish Jesuit Cardinal Luis Ladaria, had declined to prosecute the latest known case against Rupnik, stating it was past the statute of limitations.

The pope denied that the Jesuit artist received any preferential treatment, saying his only involvement was to "let it continue with the normal court, because, if not, procedural paths are divided and everything gets muddled up."

"For me, it was a surprise, really," said Francis of Rupnik, who has served on a number of Vatican commissions and whose popular mosaics can be found in religious institutions throughout the world. "This, a person, an artist of this level — for me was a big surprise, and a wound." 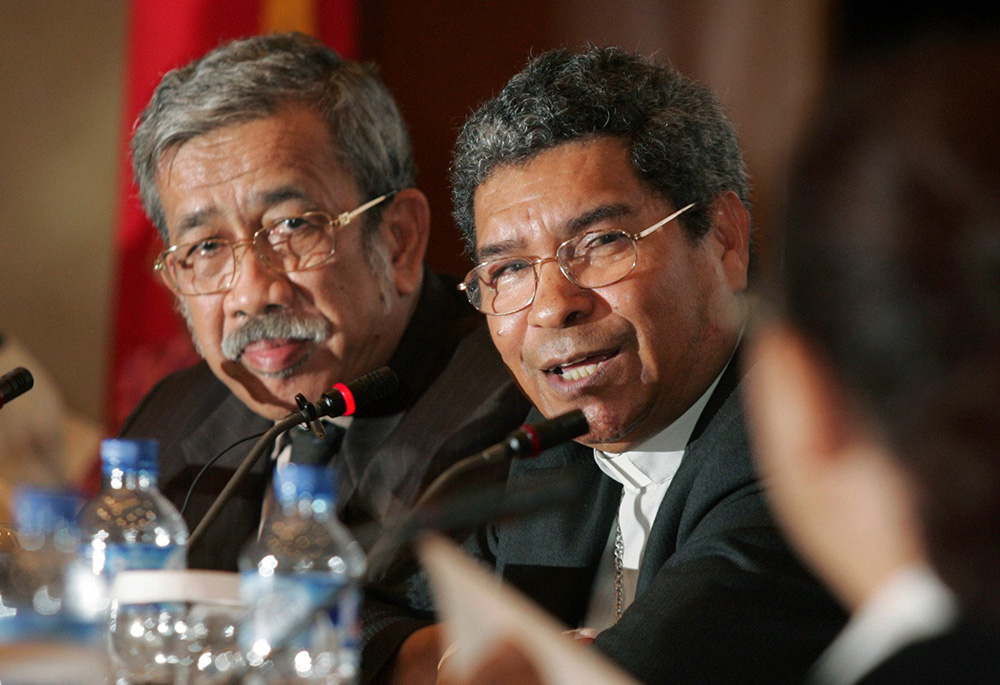 Belo, who was the Catholic Church's most senior official in East Timor from 1988-2002, is a former Nobel Peace Prize winner for his nonviolent resistance to Indonesia's occupation of the country. The Vatican confirmed last September that it had secretly sanctioned Belo years prior, and had prohibited the bishop from having contact with minors.

Francis seemed to acknowledge that the Vatican, under Pope John Paul II, allowed the 74-year-old bishop to retire early in 2002, rather than face prosecution for abusing young boys.

"This is a very old thing where this awareness of today did not exist," the pope told the Associated Press. "And when it came out [in September] about the bishop of East Timor, I said, 'Yes, let it go in the open.' ... I'm not going to cover it up. But these were decisions made 25 years ago when there wasn't this awareness."

The 86-year-old Francis, who is set to undertake a demanding Jan. 31-Feb. 5 trip to the Democratic Republic of Congo and South Sudan, said that despite continued mobility issues, he is in "good" and "normal" health for his age.

Over the last year, speculation has swirled about his health, but Francis — who will celebrate his 10-year anniversary as pope in March — dismissed those concerns, saying a bone fracture in his knee had healed. The pope, who had colon surgery in July 2021, did reveal that his diverticulosis, or bulges in his intestinal wall, had returned.

"I might die tomorrow, but it's under control," he joked. "I'm in good health."

Following the Dec. 31 death of Pope Emeritus Benedict XVI, Francis has faced a new wave of criticism from the retired pope's longtime personal assistant and cardinals that were close to Benedict.

Francis dismissed concerns of those who have expressed skepticism of the pastoral direction of his papacy, saying that while they may be irksome — "like a rash that bothers you a bit" — he prefers that such concerns be voiced in the open. 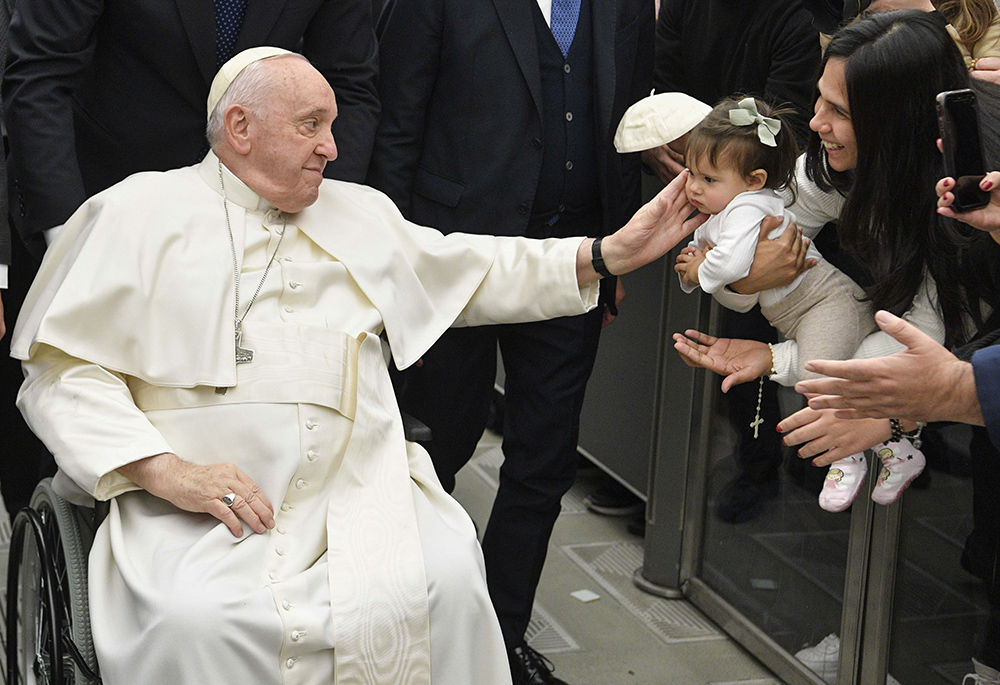 Pope Francis greets a baby during his general audience Jan. 25 at the Vatican. (CNS/Vatican Media)

"Criticism helps you to grow and improve things," he added. "The only thing I ask is that they do it to my face because that's how we all grow, right?"

In regards to the revelation that the late Australian Cardinal George Pell, who died on Jan. 10, had characterized his papacy as a "disaster," Francis seemed unfazed by the remarks of his one-time financial czar.

"Even though they say he criticized me, fine, he has the right. Criticism is a human right," said the pope. "He was a great guy. Great."

As for what Francis might have in mind for potential reforms for the role of retired pope, he said he had no plans to issue new norms further clarifying what that role would be in the future, saying that the Vatican needed more experience with retired popes before trying to "regulate" them.

While Francis said that Benedict had "opened the door" for future resignations, he did not indicate that he had any plans to follow suit any time soon, only saying that he would unlikely live in the Vatican if he did so, but instead in a residence for the retired priests for the Rome diocese.

By living in a Vatican monastery, Francis said Benedict was still a "slave" and "wasn't completely free."

"He would have liked to have returned to his Germany and continued studying theology," said Francis.

A version of this story appeared in the Feb 3-16, 2023 print issue under the headline: In papal first, Francis backs decriminalization of homosexuality: 'Not a crime'.