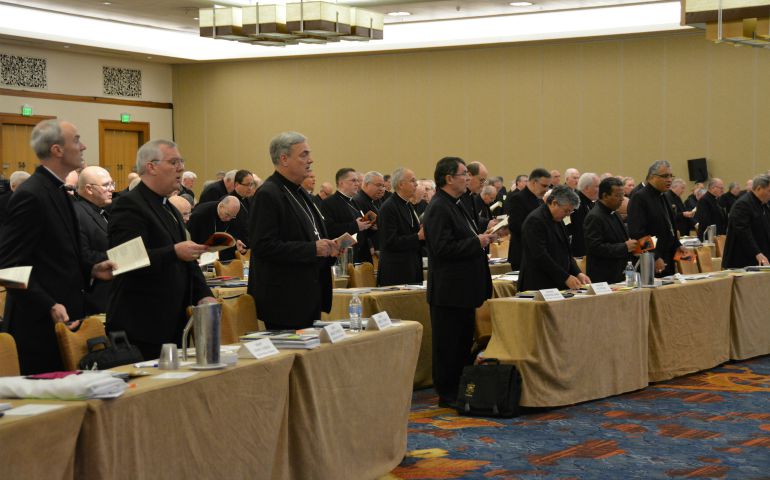 As I opined last week, I did not expect much from this week's spring meeting of the U.S. bishops' conference. The leadership of the conference staff, AKA "the fifth floor," has been a Francis-free zone, and most of the bishops in leadership positions at the USCCB tilt to the right. There are still more bishops in the U.S. who consider this papacy a bit of bad weather they hope will pass than there are bishops who have embraced Francis' papacy as the breath of fresh air the church needs. (Video of the public sessions can be found here.)

What did become obvious in Indianapolis, though, was that the tide is turning and the ice cracking in the conservative chokehold of the conference. Conservative dominance first became arrestingly evident when then-Msgr. David Malloy was elected general secretary of the USCCB in 2006, followed by Malloy's successful, if inappropriate campaign, to get Cardinal Timothy Dolan elected president of the conference in 2010, breaking the long precedent of the sitting vice-president, at the time Bishop Gerald Kicanas, taking the top post. This year, the conservative dominance began to wane.

You saw this in some little ways, such as the address by Archbishop Christophe Pierre, with its invocation to solidarity. It is difficult to think of a word we associate less with today's Republican Party, and the nuncio's talk would have fit right into any one of the "erroneous autonomy" conferences sponsored by the AFL-CIO and the Institute for Policy Research and Catholic Studies the past three years. You saw it the interventions from the floor. In recent years, it has fallen mostly to the emeriti bishops to offer strong critiques of the conference's conservative tilt. This year, a star rose in the East, as Cardinal Joseph Tobin of Newark emerged as the prophetic voice of the conference. "He is genuinely free, profound and holy," one bishop told me. His interventions were "unassailable." His words paired with the businesslike interventions of Cardinal Blase Cupich of Chicago, you could sense the discomfort of the staff when either of these two new cardinals approached the microphone.

The turning of the tide was obvious in larger ways, too. In 2016, the bishops overwhelmingly adopted with only a handful of negative votes a strategic plan that was little different from the previous one, despite requests that the new strategic plan better address the changing focus of Pope Francis. The one major change on the strategic plan? They made religious liberty one of their five areas of special concern. Wednesday, however, 53 bishops voted not to make the Ad Hoc Committee on Religious Liberty a standing committee. That was insufficient to defeat the proposal, but it showed that Team Francis is not simply going to sit quietly and go along.

"I was very pleased with the robust and mature discussion of complex issues like immigration, health care and religious liberty," Cardinal Cupich told me in a phone interview at the conclusion of the public sessions. "There is a growing consensus on these issues as people are willing to grapple with their complexity." I am not sure I see a consensus yet, but it is true that the vigorous debates harkened back to a time when the bishops' conference was more alive and more consequential than it has become in recent years. It was interesting that so much attention was paid to immigration and health care during the public sessions, and, interesting and refreshing, that so much discussion was held in public session, another sign of progressive change.

In the debate over the proposal to make the Religious Liberty Committee a standing one, Cardinal Tobin echoed a concern first raised by Bishop Christopher Coyne of Burlington, namely, that the optics were dreadful: The USCCB working group on immigration was closing up shop while the bishops were making the religious liberty committee permanent. This concern had the effect of forcing Cardinal Daniel DiNardo's hand for the second time: He announced he would keep the working group going. Back in December, after DiNardo privately had agreed to the formation of the working group at the November meeting, there was not a peep from the USCCB about it. I called one day and asked the media relations person who works on immigration about the working group, and she knew nothing about it. Only when Cardinal Blase Cupich discussed the working group in a column in his own newspaper was DiNardo's hand forced and a press release put out.

Tobin and other bishops also questioned the funding of the work of the religious liberty committee: The proposal to make the committee permanent was stated to be budget-neutral and it was pointed out that funding sources dry up for a variety of reasons. Archbishop William Lori did his best to assure his colleagues that the funding was solid and not going anywhere: We know the Knights of Columbus have donated $250,000 to the committee since its inception, and Lori is the Supreme Chaplain of the Knights. But he won't be forever, and his pal Carl Anderson won't be Supreme Knight forever, either.

To be clear: Every bishop is concerned about religious liberty, as they should be, as all Americans should be. The question is whether the histrionic approach to the issue is truthful or helpful. Archbishop Lori again called the HHS contraception mandate a "heavy burden to our ministries," although many of us do not see how filling out a form to be freed from the mandate constitutes a heavy burden. And he mentioned same-sex marriage and transgender issues as continuing areas of concern, with no acknowledgement that the USCCB is now experiencing a bit of payback for its sustained efforts to defeat gay rights at every level. Listening to Archbishop Lori is like entering a time warp. The focus is all about maintaining our pristine sense of moral superiority, not getting our hands, or at least our feet, dirty by being out in the streets as Pope Francis has repeatedly called us to do.

The discussion of health care also showed the changing tide, but on this issue, Team Francis is closer to a clear-cut win. Bishop George Thomas of Helena, Montana, warned of the "catastrophic effects" of the budget and health care proposals being discussed in Congress. "Our silence or our indifference would be tantamount to complicity in a very bad budget," he said, earning applause at the end of his impassioned remarks. That budget and those health care proposals are the handiwork of Speaker Paul Ryan, the darling of the conservative Catholic bishops.

Detroit Archbishop Allen Vigneron asked the chair of the Committee on Domestic Justice and Human Development, Bishop Frank Dewane, about the degree of collaboration of his committee and the conference with religious women who run so many hospitals. In reply, it seemed like Dewane was bending over backwards to avoid saying the name of Sr. Carol Keehan, president of the Catholic Health Association. Dewane looked foolish.

Cardinal Cupich again took to the microphone. He urged the committee to emphasize "our [Catholic] position that the state has a responsibility for creating solidarity within a country and caring for those most in need." He noted that the cuts in Medicaid were about the same amount as the tax cuts for the rich and encouraged the formation of an "action plan to mobilize our people," by developing homily aids, coordinating work with state Catholic conferences and calling on the religious women who "have done so much to establish Catholic health care in this country" and "they have credibility with our people." Indeed, although Dewane showed a timeline of all his committee had done on the issue, there was no "postcard campaign" like the bishops launched on previous issues of less significance, no full court press as it were. It is clear that so long as they get rid of the contraception mandate, many bishops are willing to look the other way if millions are thrown off the insurance rolls.

Bishop Robert McElroy of San Diego asked that the committee recognize the "breathtaking nature of the assault on a core principle of Catholic social teaching…that health care is a fundamental human right and government is its ultimate guarantor." He framed his concerns at a deeper level as well. "We live at a time when language is debased," he said, and warned that the GOP health care bill "crafted in stealth and darkness" is an example of that debasement. "'Access' has come to mean in the ACHA [the GOP bill] access in theory, or access if you have enough money." At least this time, unlike last November, Cardinal DiNardo did not publicly sneer at McElroy.

On the other hand, Archbishop Joseph Naumann of Kansas City, Kansas, repeated virtually every right-wing talking point you hear from a Republican surrogate on Fox News. He seemed very concerned to undermine the projections from the Congressional Budget Office, asking more than once if they dealt with people losing coverage or people losing projected coverage. I wish someone had asked the archbishop why that distinction should matter to bishops. He alleged there was "a lot of dishonesty with the Affordable Care Act" and that "the Medicaid provisions were not sustainable." He said that there were no more Catholic hospitals in his archdiocese, which he seemed to blame on the ACA. Someone should explain to him that in those states, like his, that were controlled by Republicans and did not expand Medicaid, Catholic hospitals have had a very rough time, that many have closed and that the current GOP proposals will put all Catholic hospitals in that boat. Conversely, Catholic health care in states that did expand Medicaid has done very well.

The tensions within the conference have been right near the surface for some time, but it is healthy to see them break into the open. Bishops should be able to debate and discuss these issues in public. The conference as a whole still is decidedly conservative. For example, consider how many times in the discussion of immigration policy the bishops made the point that the conference needed to distinguish its position from any political or partisan position. No such concern was raised on the issue of religious liberty. And, after eight years of bashing President Barack Obama, the conference is straining to avoid anything that would offend the current president.

There is hope. At the very beginning of the meeting, Cardinal DiNardo asked those who were named bishops since their last meeting in November to come forward. Fourteen new auxiliary bishops and four new ordinaries came up on stage. Some will, I am sure, cleave to the old ways, but most, I suspect, will gravitate towards Team Francis. Change at the USCCB is slow in coming, but it is coming.

A version of this story appeared in the June 30-July 13, 2017 print issue under the headline: Tide is turning in bishops' conference.