Looking forward to policing the culture of the church in 2017 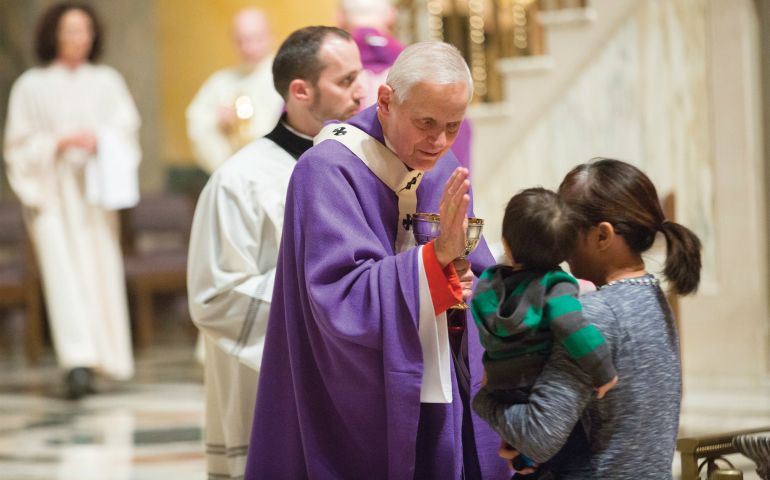 Cardinal Donald W. Wuerl of Washington blesses a child during a Dec. 18 Mass at St. Matthew's Cathedral commemorating the 50th anniversary of his ordination to the priesthood. (CNS photo/Jaclyn Lippelmann, Catholic Standard)

Happy New Year to one and all. It is not so easy to say those words with any degree of conviction this year, with the country's teeth on edge, not knowing what to expect from our incoming president. "They sow the wind and reap the whirlwind," prophesied Hosea, and this year, because the right number of people in the right number of states did the sowing, all of us will reap the whirlwind whether we like it or not.

Looking ahead to 2017, thinking about what stories will emerge, may seem like a fool's errand. 2016 was nothing if not unpredictable. Still, like the wise men who followed the star to Bethlehem, it is possible to see, if not in the stars than in ourselves, some of the key issues that are likely to dominate analysis in these pages.

"No one knows the system better than me, which is why I alone can fix it," he told the Republican Convention back in July. Like much of which comes forth from Donald Trump's mouth, the phrase is both grandiose and imprecise. Which "system" does he plan to fix? Our nation's Byzantine tax code? His fixes may reveal the distorted economic view that still unites most Republicans, trickle-down economics, of which Pope Francis said, "This opinion, which has never been confirmed by the facts, expresses a crude and näive trust in the goodness of those wielding economic power and in the sacra­lized workings of the prevailing economic system." Will Trump try and fix the system of faux-fair trade? Will he try and fix our country's health care system? Our immigration system?

The words "I alone can fix it" could have been cribbed from any one of a number of Mussolini speeches from the 1920s. That is a chilling fact, one that did not receive sufficient attention. (The media focused on the borrowed phrases in Melania Trump's speech instead.) Our constitutional order, with its checks and balances will be strained by Trump's sense of self. He puts one in mind of what Winston Churchill once said about Secretary of State John Foster Dulles: "He is the only bull I know who brings his own china shop with him."

Trump is not a typical Republican, breaking with party orthodoxy on a host of issues from trade policy to relations with Vladimir Putin's Russia. Look for very interesting, and ugly, fights to break out between the White House and Senate Republicans like John McCain and Lindsay Graham soon after the inauguration if Trump tries to roll back the sanctions President Barack Obama just imposed against Russia. If Trump does not seek to appease Russia, I still predict the friction between Trump and the old guard of the GOP will break out sometime this spring.

Unlike Obama, Trump is entering the White House with a relatively strong economy at his back. Look for him to take credit for every bit of good economic news, as he did last week with Sprint, even though he had nothing to do with Sprint's decision. His grandstanding will, I predict, work for him throughout the year, resulting in his approval rating going up. Over the four years of his tenure, he will need to keep producing these kinds of positive headlines, or his shtick will wear thin. It is highly doubtful coal mines will re-open, his promises to the contrary notwithstanding. Ditto the steel mills. People who voted for him will need to see improvement in their lives after a time, and will not be satisfied with macroeconomic good news. But, again, I suspect that will come two or three years into his presidency, not in 2017.

It is hard to know how Trump will seek to deliver on his promise to build a wall on the southern border and deport everyone who is in the U.S. without proper documentation. Both projects are not only well nigh to impossible to accomplish, they also will be met with widespread resistance, not least from the Catholic church. Yet, if the wall is not built, his base will grow antsy. Trump is smart enough to know that if by year's end he is perceived as just another politician who does not deliver on his campaign promises, he is doomed. Is he smart enough to know that mass deportations will create a firestorm he can't control? No one knows.

The biggest danger the country faces is that after a series of bad news cycles, no matter the source, Trump will return to the well of racial resentment and nativist animus to bolster his poll numbers. The man has demonstrated an obsession with his own poll numbers, and he has now proved the entire political establishment wrong by showing that stoking racism and nativism can still win an election in 21st-century America. He will not hesitate to go back to that well if he thinks it will help him, especially with Steve Bannon whispering into his ear.

In the life of the church, I expect Pope Francis to hit the gas pedal on his efforts to reform the church. He turned 80 last month, and I was shocked by the vigor with which he marched down the long aisle of St. Peter's Basilica at the consistory in November. Pope Francis is fit as a fiddle. His selection of the new cardinals last autumn demonstrated how keen he is to further his reform efforts. As my colleague Jesuit Fr. Thomas Reese noted, "he has changed the very nature of the College of Cardinals by ignoring traditional cardinalatial sees and, for the most part, appointing as cardinals bishops who reflect his own views."

The reorganization of the curia will continue apace, with ongoing resistance from those who work there, especially to financial reforms. Cardinal Kevin Farrell must bring together two dicastries that have often been at odds with each other. Cardinal Peter Turkson faces a similar task and must try to create a whole new dicastry from groups that had previously vied with each other for papal and popular attention. Smart money says both men are up for the task. Whether the reforms of the Vatican's finances will be as successful is more of an open question. I also anticipate some major personnel changes at the top ranks of the curia; for example, I would be surprised if Cardinal Gerhard Müller is still the prefect of the Congregation for the Doctrine of the Faith at the end of 2017.

Stateside, as discussed last week, look for Cardinals Blase Cupich and Joseph Tobin to increasingly become the face of the church in the public square, with Archbishop Jose Gomez also playing a central role in the Church's response to any attacks on immigrants. Cardinal Donald Wuerl will continue to be the main kingmaker in the selection of new bishops, and Cardinal Sean O'Malley will continue to disprove the thesis that a true conservative churchman must be in the opposition to Pope Francis. These five will be the co-captains of "Team Francis," leading the way not only in their public statements but also by undertaking programs of social justice and environmental protection that are in line with the Holy Father's wishes. As for the leadership at the USCCB, I suspect they will continue to sink into irrelevance. A demoralized staff is being replaced by an ideologically driven crew. It is sad. Recalling the late Cardinal Joseph Bernardin, a staffer at the conference told me, "Ah, yes, back when the conference made a difference."

The opposition to Pope Francis, such as the National Catholic Register and LifeSiteNews, will continue to complain, but it will become increasingly obvious in 2017 that they are more noisy than numerous. The opposition is also exceedingly well-funded, and those bishops who want to support the pope should not deceive themselves into thinking these groups will fade into the sunset. The opposition is doing real damage to the church and seems unaware that it is causing a great deal of the thing it claims to fear: scandal. "Team Francis" needs to come up with creative ways to confront this challenge. Archbishop Paul Coakley pointed the way at last November's plenary meeting of the USCCB, when he encouraged the bishops to ignore an email from the Lepanto Institute challenging the Catholic identity of Catholic Relief Services. Coakley, who is no liberal, told his brother bishops the group had no credibility. The bishops applauded Coakley's statement, but will they refuse to give in when Lepanto mounts another witch hunt?

One thing is certain in 2017. Here at NCR, and specifically at "Distinctly Catholic," we will be policing the culture, the church and the culture of the church, bringing you the news you need to know and the analysis to help make sense of it. The prospect of Pope Francis' vision colliding with Donald Trump's vision, in a variety of ways, is a prospect for which, by both nature and training, NCR is poised both to report and to dissect. Buckle up, everybody. It's not going to be boring.

The Davis-Francis meeting: Who dunnit?