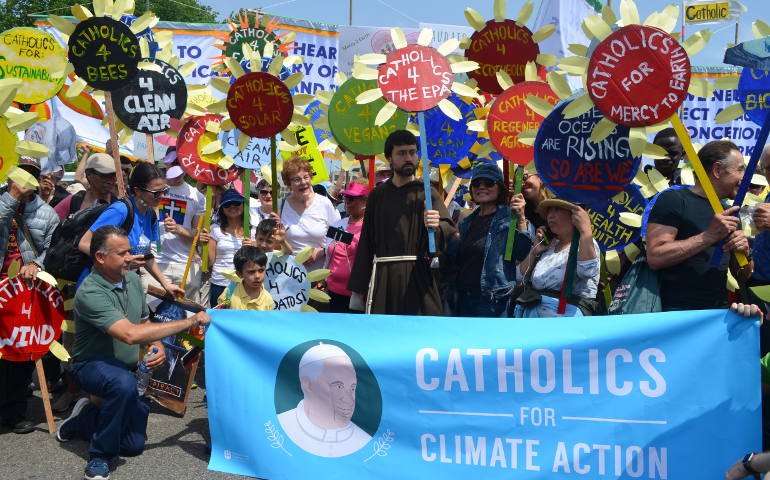 Nearly two years after publication of Pope Francis' landmark encyclical Laudato Si', a global Catholic campaign hopes to recruit 1 million Catholics to keep its message alive and animated in the daily lives of Catholics, in particular around the issue of climate change.

The Laudato Si' Pledge, created by the Global Catholic Climate Movement, seeks to rededicate Catholics to Francis' calls in the first papal encyclical on the environment and human ecology for all to do their part in protecting God's creation. It comes ahead of the two-year anniversary, June 18, of the release of "Laudato Si', on Care for Our Common Home."

The campaign has set a goal of mobilizing 1 million Catholics worldwide to commit to take steps like reducing energy use and adopting clean energy, and to push for such measures within their communities and countries. Individuals, families, parishes and organizations can sign the pledge, which is currently available in four languages.

The pledge, accessible at LiveLaudatoSi.org, reads: "Answering Pope Francis' urgent call in Laudato Si', I pledge to: Pray for and with creation; Live more simply; Advocate to protect our common home."

Those who sign on will receive invitations to various Global Catholic Climate Movement programs, such as those planned around the Season of Creation (in September) and Earth Day, to turn their pledge into actions and lifestyle changes.

"Pope Francis helped transform the climate debate by reframing it as a moral issue. Now is the turn for the Church to 'walk the walk' and bring the encyclical's message to life," said Tomas Insua, executive director of Global Catholic Climate Movement, in a statement.

The international network of 400-plus Catholic organizations points to the sheer size of the global Catholic Church — 1.2 billion people, or roughly 16 percent of the world's population, along with its hundreds of thousands of parishes, schools and other institutions — and the accompanying carbon footprint not only as reason for Catholics to make the climate issue a priority but as potential for meaningful impact through collective action.

In his encyclical, Francis wrote, "The climate is a common good, belonging to all and meant for all," adding later that for Christians, care for creation is "an essential part of their faith."

"It is good for humanity and the world at large when we believers better rec­ognize the ecological commitments which stem from our convictions," the pope wrote.

"The gravity of the ecological crisis demands that we all look to the common good, embarking on a path of dialogue which requires patience, self-discipline and generosity, always keeping in mind that 'realities are greater than ideas,' " Francis said.

Franciscan Sr. Sheila Kinsey, executive co-secretary of the Justice, Peace and Integrity of Creation Commission of the International Union of Superiors General, told NCR the pledge demonstrates "the common good matters for us."

"We are part of a global family and we realize that our actions affect the whole world," Kinsey said.

A key aspect of the campaign, she added, is that it is a community effort among Catholics across the world. Recognizing that others are doing their part "creates kind of a momentum," Kinsey said. "It creates a climate, in a sense, that things can change."

A kick-off event for the Laudato Si' Pledge was set for June 17 in the Philippines, the same locale where Global Catholic Climate Movement formed in January 2015 during the pope's visit to the Pacific archipelago.

The island nation has served a similar role for past GCCM programs, not only because of the enthusiasm there around environmental justice but also in its state as a global ground-zero for the impacts of climate change, including rising seas and more intense storms, such as 2013's Super Typhoon Haiyan, which killed at least 6,300 people.

Insua, in Manila for the pledge kick-off, told NCR in an email that there is "extremely exciting momentum building up around the pledge, particularly with the bishops of the Philippines."

Both Cardinal Luis Tagle of Manila and Lingayen-Dagupan Archbishop Socrates Villegas, president of the Bishops Conference of the Philippines, were expected to attend the event.

The Laudato Si' Pledge has drawn initial support from four additional cardinals, from climate vulnerable parts of the globe, as well as the United States.

"This is a crucial ministry to help the global church respond to the climate crisis," said Cardinal John Ribat of Port Moresby, Papua New Guinea, who also serves as president of the Federation of Catholic Bishops' Conferences of Oceania.

Ribat, elevated to a cardinal in October, was among the heads of six continental bishops' conferences who issued an appeal calling for a global deal to address climate change ahead of the 2015 United Nations climate summit that concluded in the Paris Agreement. He has been outspoken about the present-day impacts climate change has had on the people of the Pacific islands, where relocation due to rising seas has already begun for some communities, including in the Carteret Islands.

"On behalf of the vulnerable communities of Oceania, I urge all Catholics to join and support this important effort to bring Laudato Si' to life," Ribat said.

Boston Cardinal Sean O'Malley, a member of Pope Francis' Council of Cardinals, said in a statement that through Laudato Si' "Pope Francis provides an important contribution to the good of the world we live in by making clear that we have a responsibility to care for the extraordinary gift of God's creation," not only for all people today but for future generations, too.

Cardinal Blase Cupich of Chicago described the encyclical as "an unequivocal call to action to protect our common home."

"As we mark the second anniversary of this groundbreaking document, there is an even greater urgency to work together to honor the gift of our creator," he said.

"Now more than ever, the world needs to heed the moral imperative of Laudato Si', and step up to the bold and urgent action that is necessary," Figueres said.

Since its founding, Global Catholic Climate Movement has emphasized grassroots steps for Catholics to address climate change, whether as individuals or within their local communities. It has also partnered in large demonstrations and marches organized by 350.org and other climate action organizations.

The "local actions" sentiment was redoubled following the November U.S. election of President Donald Trump, who pledged to reverse the country's climate policies. Since assuming the presidency, he has ordered a review of the Clean Power Plan and has sought to overhaul the U.S. Environmental Protection Agency, proposing major budget cuts and a simplified focus on clean air and water.

Most recently, Trump announced he intends to remove the U.S. from the Paris Agreement, which would effectively cease implementation of the nation's pledge at the federal level.

The Laudato Si' Pledge comes as the second worldwide signature drive undertaken by Global Catholic Climate Movement, the first coming ahead of the COP21 climate negotiations and collecting 900,000 signatures to a petition seeking negotiators to reach a deal that sought to limit average global temperature rise to 1.5 degrees Celsius.

That threshold, included as a tertiary goal to the "well below" 2-degree mark in the Paris Agreement, was a priority for island nations, such as the Philippines, which provided more signatures than any of the 135 countries that participated.