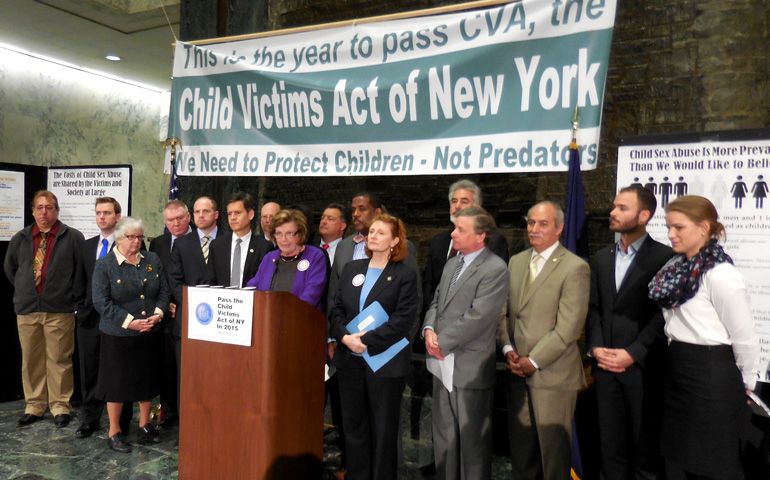 While many folks around the world marked April 22 as Earth Day, in Albany, N.Y., State Assemblywoman Margaret M. Markey used the occasion to host a Lobby Day to promote awareness of child sexual abuse.

Across the country, April is known as National Child Abuse Prevention Month. Markey and sixty other assemblymembers have called on Gov. Andrew Cuomo to extend the proclamation to New York state, which ranks among the worst for the way in which it deals with victims of child sexual abuse crimes, according to a survey by Professor Marci Hamilton of Cardozo Law School.

For years, Markey has sponsored the Child Victims Act, a bill that would "reform New York's archaic criminal and civil statute of limitations for childhood sexual abuse crimes," according to a press release from Markey's office.

"The Child Victims Act calls for the total elimination of the criminal and civil statute of limitations for child sexual abuse crimes in the future, with a complete one year suspension of the civil SOL to benefit older victims," the release also states. More than one-third of the members of the State Assembly have joined Markey to co-sponsor the bill.

Among the organizations supporting the Albany Lobby Day, five were Catholic groups, including the Catholic Coalition of Conscience, an umbrella group comprised of Call to Action Metro NY, Call to Action Upstate NY, Voice of the Faithful NY, and Dignity/NY.

Perhaps unsurprisingly, the Child Victims Act has proven unpopular with Catholic bishops throughout the state. Their ongoing campaign against the measure has been called "shrewd and relentless" by The New York Times.

Bishop William Murphy of the diocese of Rockville Centre has been especially vocal in his opposition to the bill, most recently charging that it "seeks to penalize only the Catholic Church for past crimes of child sex abuse."

Art McGrath of CTA Metro NY and Mariann Perseo of VOTF-NY acknowledged institutional resistance to the bill but insisted that their religious tradition calls for these kinds of reforms. "Catholic theology and the Catholic Catechism call for reparative justice for the victims; consequences for the perpetrators; and protection for child victims," they said in a statement.

Earlier this week, Markey published a letter that she wrote to Pope Francis, asking him to meet with survivors of child sexual abuse during his upcoming visit to New York City in September. The letter cites the pope's strong message to Pontifical Commission for the Protection of Minors on Feb. 2, 2015, and asks Francis for his "help in convincing New York Bishops to bring their views in alignment with yours on the subject of abuse."

Cardinal Sean O'Malley, archbishop of Boston and chair of the Pontifical Commission for the Protection of Minors, was also copied on the letter.

An online petition of support for the Child Victims Act was also announced at the Lobby Day.

"There is no limit on what is a lifetime of suffering and anguish for so many victims of child sexual abuse," Markey said. "Nor should there be any limit on holding accountable those institutions and organizations that have deliberately protected and hidden perpetrators."

"Their actions make it possible for pedophiles to continue to prey on new victims," Markey concluded.

Chittister to host webinar on moral leadership of women

Boehner episode can start the dialogue

The Bible Series: A Must Watch