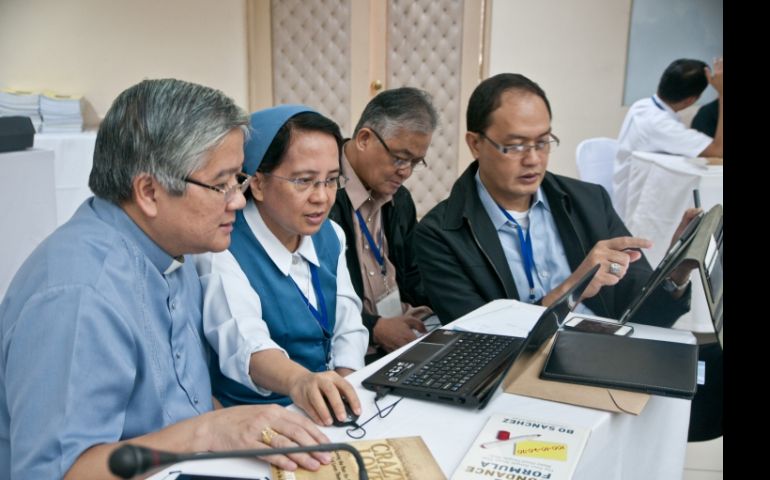 Manila, Philippines — Bishops in the Philippines are stepping into social media. During workshops preceding their semiannual assembly and with the help of Paulist nuns, Seàn-Patrick Lovett is training Philippine bishops to tell stories and engage people using tools like Facebook and Twitter.

Lovett is vice president of the Center for Research and Education in Communication and director of Vatican Radio's English program and has been giving the same seminar to bishops in various countries.

"Every bishops' conference is different because every cultural context is different," Lovett said, according to the Catholic Bishops Conference of the Philippines website. This workshop on media management and social media for clergy runs Tuesday through Thursday before the conference opens Saturday.

"Lovett admitted that it is sometimes difficult to convince bishops to engage in social media, judging from his experience and knowing how the new media can be intimidating to some people," the bishops' conference reported.

"One of the ways, perhaps they can be convinced, is to remind them that we do need to connect, and that the new media, social media allow us to connect to the people," he was quoted as saying.

Jesuit Fr. Jerry Martinson, former vice president of the International Catholic Association of Film and Audio Visuals, is helping Lovett, and members of the Society of St. Paul, Daughters of St. Paul and Pious Disciples of the Divine Master are facilitating.

Bishops' conference president Archbishop Socrates Villegas of Lingayen-Dagupan on Monday told NCR that Lovett's group "sent us a proposal saying they are going around the world giving seminars to bishops on this. It's really their cause. They're promoting it. I said, yes!"

"Media is a very powerful means, especially social media," he said. "Our youths are more in the social media than newspaper. I think the bishops have to be aware of that ... begin handling (social media), maximizing their use for evangelization not for our own PR."

The workshop precedes the the bishops' conference's semiannual plenary assembly Jan. 25-27 that hopes to gather together most of the approximately 90 active bishops in the country this weekend in prayerful discussion of the Philippines and other church concerns.

Villegas said these include Year of Laity designated by the bishops' conference this year to emphasize the role played by the Catholic faithful in the "sanctification and transformation of the world."

The meeting also plans to tackle review a report on results of the survey on family that was conducted in some 40 dioceses in preparation for the October 2014 Synod of Bishops in Rome.

Villegas told NCR that the bishops' conference has turned over survey responses to a team of researchers connected with the Pontifical University of Santo Tomas and De La Salle and Adamson universities, who are collating the results and drafting the report to be presented to the bishops during the assembly before being submitted to Rome by the Jan. 31 deadline.

Are Buddhism and science incompatible?

Celebrate Pride Month with books that honor all as 'wonderfully made'