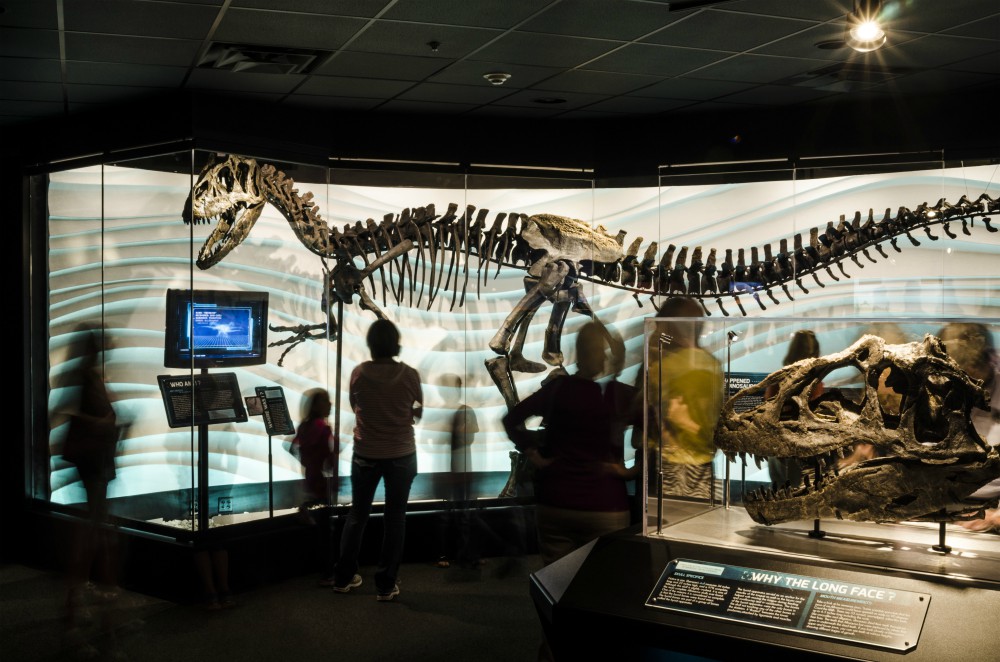 The Creation Museum displays an allosaurus skeleton named Ebenezer as "a testament to the reality of the global Flood of Noah's day and the truth of God's word." (Courtesy of the Creation Museum)

"On your walk through biblical history, you’ll encounter a realistic Garden of Eden, animatronic Noah, Flood dioramas, stunning video displays, and much more. Prepare to believe!"

That's how the website for the Creation Museum, a 75,000-square-foot facility in Petersburg, Kentucky, sums up the exhibits that millions have visited since it opened in 2007.

The Creation Museum is just one of a host of biblically themed tourist attractions around the U.S., including the Museum of the Bible in Washington, D.C.; the BibleWalk wax museum in Mansfield, Ohio; the Christ in the Smokies Museum and Gardens in Gatlinburg, Tennessee; and biblical stage shows in Branson, Missouri, and Lancaster, Pennsylvania; all of which seek to pull visitors into the world of the Bible.

Catholic experts say an embodied experience of faith, assisted by visual aids, physical journeys or other aesthetic elements, can bring people closer to God. But they also caution that Bible tourist attractions often come with a particular agenda that may not harmonize completely with a Catholic view of Scripture.

There's no reason for Catholics to totally dismiss the value of a particular biblical exhibit just because it comes from a non-Catholic perspective, said Fr. John Kartje, the rector of Mundelein Seminary at the University of St. Mary of the Lake, near Chicago.

Accurate displays on life in first-century Palestine, for example, can have "a really strong positive effect," Kartje said. They acknowledge the "human hunger" to recognize the reality of biblical figures and culture and can offer "that sense of being able to step out of your time and culture or language" to understand the "incarnate experience" of what it would have been like to be present during biblical times.

Although Kartje hasn't been to a faith-based biblical tourist attraction, he has been fascinated by secular Bible exhibits — such as the Field Museum in Chicago — that offer an "honest presentation" of biblical texts. He said there's no need to view any presentation of the Bible with suspicion, but it's good to have an "inquisitive and critical eye."

Of special concern to Kartje, who teaches Scripture at Mundelein and holds a Ph.D. in astrophysics, are museums that offer a Bible-based portrayal of natural history or the creation of the universe that contradicts credible scientific evidence.

"The Catholic perspective on the biblical texts certainly does not require that one would read them from this sort of literalistic perspective," he said.

While Kartje didn't mention any examples, the Creation Museum seems to embody this approach. The museum's 140 exhibits — which include a zoo, a planetarium, a 4-D special effects theater, botanical gardens and a zip line — present a literal interpretation of the Bible.

According to its website, the museum displays an allosaurus skeleton named Ebenezer as "a testament to the reality of the global Flood of Noah's day and the truth of God's word," suggests dragon myths were based on human interaction with dinosaurs and argues that "Lucy" — the famous fossil thought to be an evolutionary precursor to modern humans — was actually an extinct species of ape. 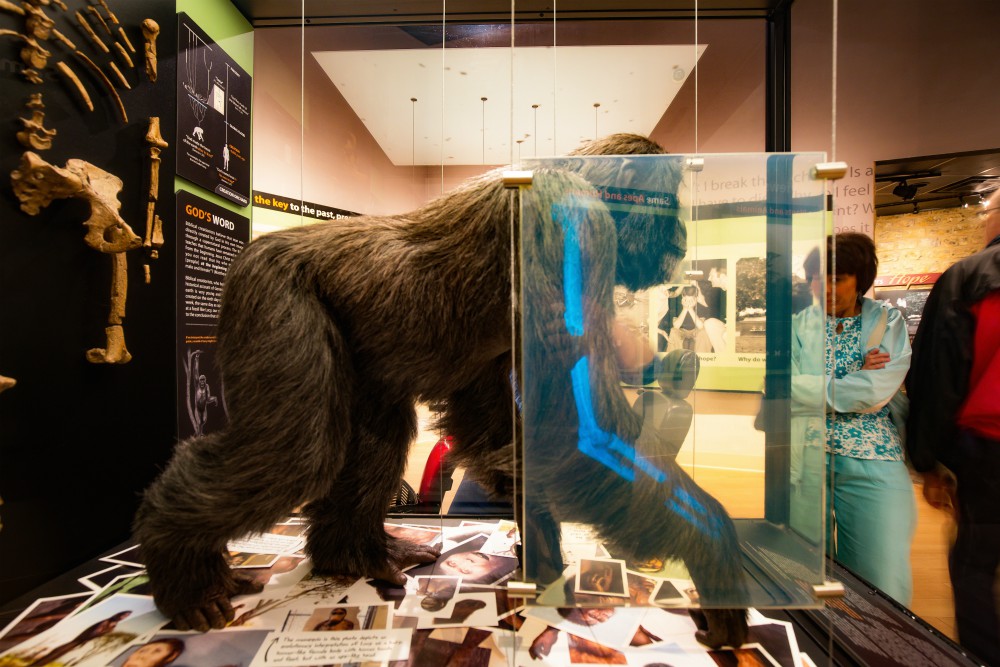 "Man's word says humans and apes evolved from a common ancestor, but God's word says THERE'S NO APE IN YOUR ANCESTRY!" reads a caption on the Lucy exhibit, visible in a virtual tour of the museum.

According to its website, both the museum and the Ark Encounter, a "sister attraction" in Williamstown, Kentucky, are an "evangelistic outreach of Answers in Genesis." Answers in Genesis is an apologetics ministry dedicated to counteracting "evolutionary ideas, and its bedfellow, a 'millions of years old' earth (and even older universe)."

The Creation Museum is honest about its ideological commitments and caters to a very specific clientele, said Candida Moss, a professor of theology at the University of Birmingham in England, but she is critical of "the kinds of historical misinformation that's being supplied" and says calling such places museums "gives them this air of authority that I don't think they should have."

In the nation's capital

Moss' research has focused on a museum she says is much less open about the worldview that underlies its mission; she authored a book with Joel Baden about the Museum of the Bible called Bible Nation: The United States of Hobby Lobby. (The museum is largely funded by the Green family that owns Hobby Lobby.) 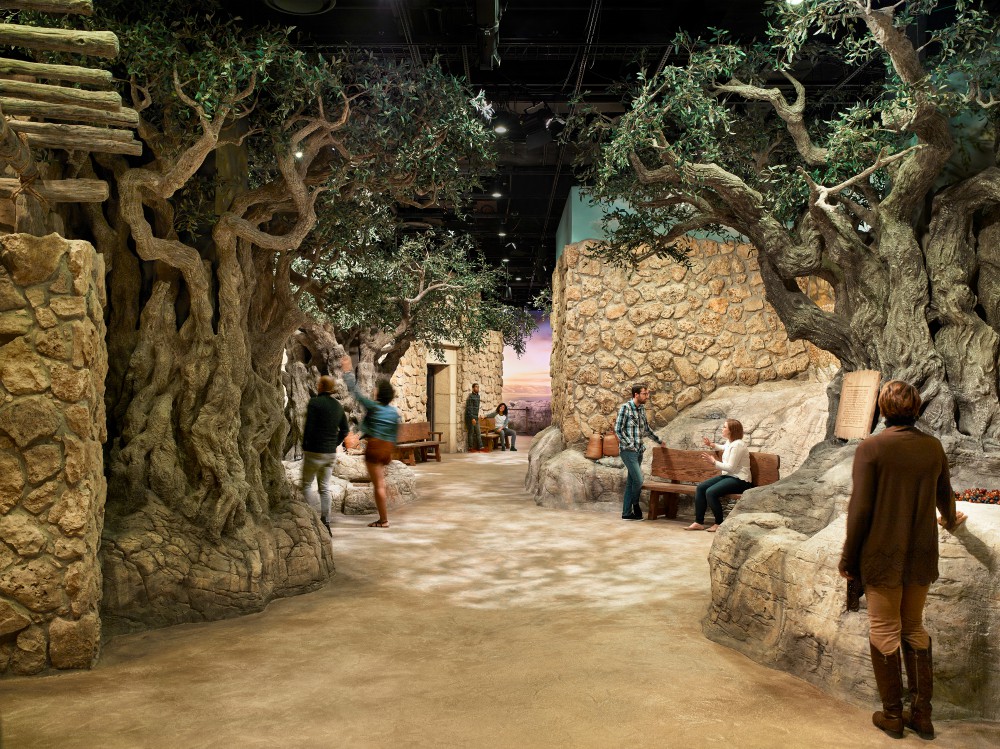 Those who designed the museum, which opened in late 2017 and includes exhibits on archaeology, the Vatican, the Bible's impact, the world of Nazareth, the history of Israel and Billy Graham, aren't lying when they call themselves "non-sectarian," Moss told NCR. "I just don't think they understand what that really means."

Deciding what to include in a museum always involves some level of subjectivity, Moss said, and the Museum of the Bible founders began with an evangelical goal before switching to a broader educational mission.

"The problem is that these are faithful Christians, they are evangelicals, they are Protestant, and it's very difficult when you have a faith commitment to a particular understanding of what the Bible means and what the message of Jesus is to be fair to other traditions," Moss said.

In an interview with Museum of the Bible president Cary Summers, Moss asked about curatorial independence for the Vatican exhibit. Summers clarified that the Vatican would curate the exhibit, but that he emphasized the museum has the final say, Moss said.

"Their message is an evangelical Protestant one, and it's not that they don't want other Christians in the room for that conversation," Moss added. "They do. They just aren't going to let Catholics or Jews or Orthodox Christians set the agenda. And I think that's something people should be aware of."

With a Vatican exhibit and the Sistine Chapel as one of the displays on its shifting Grand Hall ceiling, "you've basically built this premiere Catholic pilgrimage site" for those who can't go to Rome, Moss said she told Summers, "and he indicated that that's exactly what they wanted." Catholic leaders should be troubled to have "a premiere Catholic pilgrimage site that is run by Protestants," Moss said.

The idea of re-creating a pilgrimage site isn't new, said Kate Barush, a professor of art history and religion at the Jesuit School of Theology in Berkeley, California, but she'd have to go to the Museum of the Bible and interview visitors to ascertain whether the curators truly created a "pilgrimage through images" that inspires religious experience.

Barush suggested that the appeal of biblical tourist attractions could have something in common with the grassroots projects she recently researched — such as a man who walked the Camino de Santiago in his backyard — and even with traditional Catholic devotions.

"For hundreds of years, Catholics have had a number of ‘visual aids’ through which to remember and reflect on the actions and deeds of Christ and the incarnation, from praying the Stations of the Cross on Good Friday, where the Passion is enacted to walking through the west façade of any Gothic cathedral toward the altar — Eastward towards the Holy Land and also the Sacrament," she wrote in an email to NCR. "Even if the aisle is only 10 feet long, it is, in this way, a mini-pilgrimage and an embodied devotional experience."

Similarly, visiting a Bible exhibit "could be a way to get closer to God to make the stories of Scripture more real," she said in a follow-up conversation, pointing to the Christian tradition of using imagery "to try to activate the imagination and the idea that as your imagination is activated you can become closer to God or to the divine."

Barush said it was possible Catholics haven't created any major Bible tourist attractions because they already have so many opportunities for those embodied experiences within their faith tradition.

The lack of Catholic Bible museums could also be a symptom of less focus on the Bible compared to that of other Christian traditions, suggested Kartje, who thinks that Catholics can benefit from Bible exhibits despite the need for some level of caution.

"If your interest is intrigued, then, there's only so much that can be conveyed in a little blurb in a museum caption; go ahead and try to do a little more research," Kartje said. If a Bible exhibit is "making a pretty strong statement about who God is or what God does or how human beings relate to God, then realize it's gonna take more than just one exhibit to fully convey that."

Observers' doubts should especially inspire investigation, he added. "No one should say, 'Well, I saw it in the Bible museum, so it has to be true,' but going to make that visit perhaps is the prompt to gaining some more in-depth knowledge and experience that wouldn't have otherwise happened."