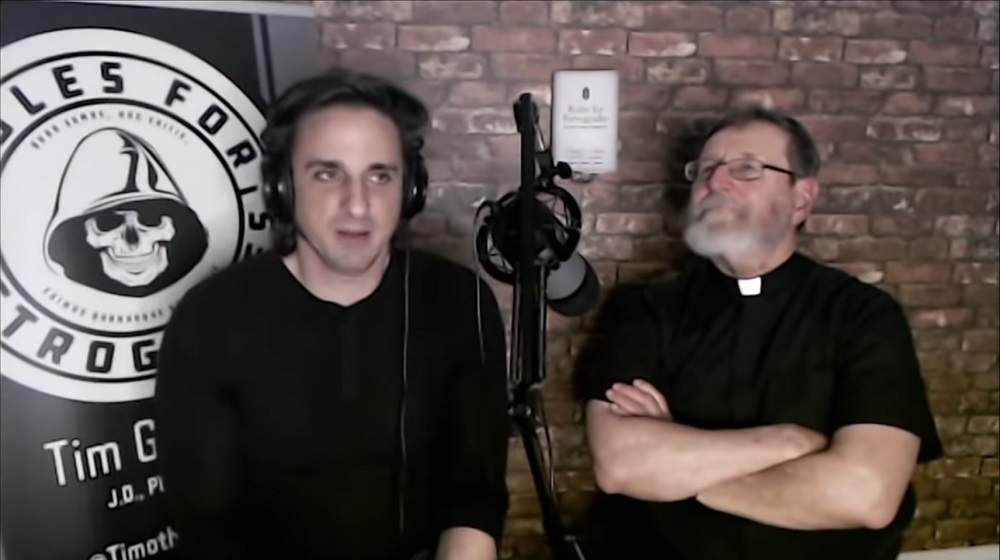 The Eternal Word Television Network, one of the Catholic Church's largest media enterprises, is entering 2021 under a cloud of uncertainty with a slate of departures, some forced and others voluntary, among its radio and television hosts and news editors. The changes at EWTN come at a time when the company is also under scrutiny for its often-uncritical embrace of the Trump administration, regular opposition to Pope Francis and questionable adherence to journalistic standards.

On Dec. 30, EWTN announced the cancellation of radio host Gloria Purvis' morning show, "Morning Glory," which regularly featured her pro-life commentary alongside calls for Catholics to become more vocal in opposing racism. In June, the Texas-based Guadalupe Radio Network — the largest EWTN radio affiliate in the U.S — pulled her show soon after she consistently expressed dismay over the killing of George Floyd, an unarmed Black man, at the hands of a Minneapolis police officer. Despite initially insisting the program was "going strong," the network cancelled her show without warning.

EWTN also cancelled the "Open Line" radio show with Fr. Larry Richards. While he did not provide a reason for the cancellation, Richards, who is known as a regular defender of Pope Francis on his program, announced his firing on social media. "We will see where the Lord leads me next! His will be done!," he wrote.

On Dec. 31, two top editors at the EWTN-owned Catholic News Agency announced their departures. Ed Condon, the Washington bureau chief, told NCR that he made the decision to leave on his own terms, and editor-in-chief, J.D. Flynn, said on social media that he had made the decision several weeks prior "for personal and family reasons."

Alongside the 11th-hour 2020 departures, in late November, EWTN suspended the airing of a show by a prominent New York priest, Fr. George Rutler, following charges that he sexually assaulted a female security guard after she allegedly filmed him watching gay pornography. Rutler has denied the allegations, while the Archdiocese of New York has said they are being investigated by the Manhattan District Attorney's office.

Michael Warsaw, chief operating officer and chair of the EWTN board, did not respond, through a spokesman, to NCR's repeated requests for comment.

Following news of Purvis' dismissal and the subsequent removal of the radio show's webpage, a number of Catholic commentators previously appearing on EWTN took to social media to demand their appearances be removed from their platforms unless Purvis is reinstated. The webpage and the content for the show were subsequently restored, though as of Jan. 5 the webpage was again "not found."*

Purvis also serves as a consultant to the U.S. Catholic bishops’ Committee for Religious Liberty and has been a presenter at the bishops’ 2017 Convocation of Catholic Leaders. At the time of publication, no U.S. bishop had publicly opposed her firing. 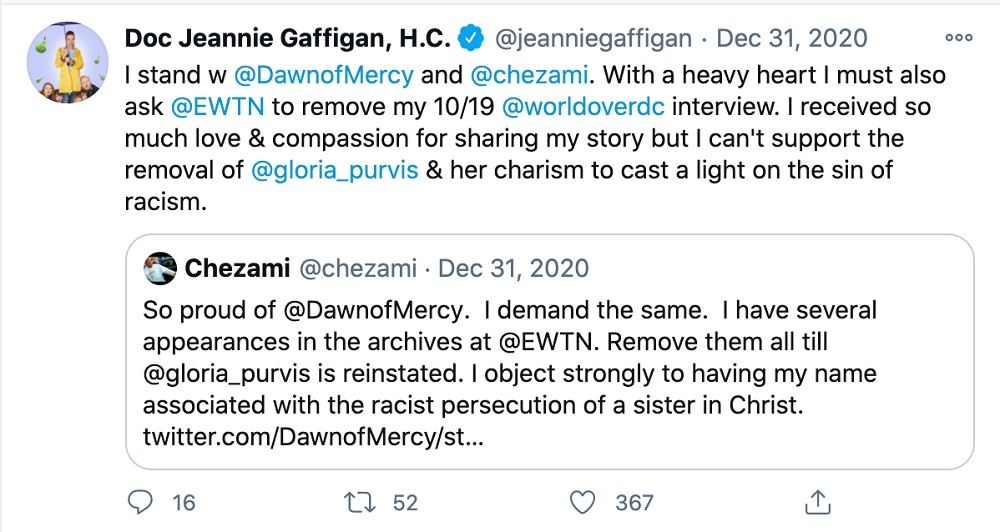 At the same time as the network faced criticism over its ouster of its one regular African American voices, another EWTN host, Jesuit Fr. Mitch Pacwa, appeared on the "Rules for Retrogrades" YouTube show of right-wing internet personality Timothy Gordon.

"God bless these guys. Wish I was there with them," Gordon tweeted with video footage of the Proud Boys D.C. gathering.

During his interview with Gordon, the EWTN priest was asked by a listener how to best engage with one's enemies.  Pacwa offered an example from his own love of hunting.

"I don't buy meat in the store, I get it myself," he said. "I really think like a hunter. I hunt varmints and I hunt food. I'll take down either one...I'm constantly learning from the animals. I make sure that they give me a heart shot. That applies here. I need to understand what's going on with our opposition."

Some Catholics have taken to Twitter in recent days using the hashtag #BoycottEWTN in response to recent events, but the turmoil inside the organization appears to be promising to others who have previously criticized the network.

Michael Voris, the head of the fringe right wing group Church Militant, tweeted on Jan. 1, that since EWTN is "dumping personnel and changing things up," the two operations should have a "friendly discussion."

In addition to its programming and staffing changes, over the last year EWTN has undergone a number of shifts at the top of the multi-million dollar enterprise. In January 2020, president and chief operating officer of EWTN News, Dan Burke, announced his departure. Burke was replaced by Andrew Walther, a longtime communications professional, in June 2020. Walther died Nov. 1 of complications related to leukemia. To date, a successor has not been named.

Among the new shows announced for EWTN's 2021 line-up will be a weekly television news analysis show hosted by Montserrat Alvarado, current executive director of the Becket Fund for Religious Liberty, and a new radio show on women with Kimberly Hahn, wife of Catholic apologist and author Scott Hahn.

Despite serving on the Vatican's Dicastery for Communications, EWTN's top executive, Warsaw, has continued to allow the network's most controversial host, Raymond Arroyo, to regularly promote and to interview the schismatic former papal nuncio to the United States, Archbishop Carlo Maria Viganò. Viganò has previously called for Pope Francis' resignation and is widely perceived as an ally of the Trump administration.

In response to the turmoil inside the media conglomerate, Jesuit Fr. James Martin, an editor-at-large at America Media who is also a consulter to the Vatican's communications dicastery, told NCR that "Far too much of the commentary on EWTN is already reflexively critical of Pope Francis."

"I hope these recent moves don't indicate that their commentators will move even further in that direction," he continued. "It will do no one any good if EWTN becomes EVTN: Eternal Viganò Television Network."

*This article has been updated to reflect the changing status of the "Morning Glory" webpage.

A version of this story appeared in the Jan 22-Feb 4, 2021 print issue under the headline: EWTN cancellations, departures prompt questions about network's future.