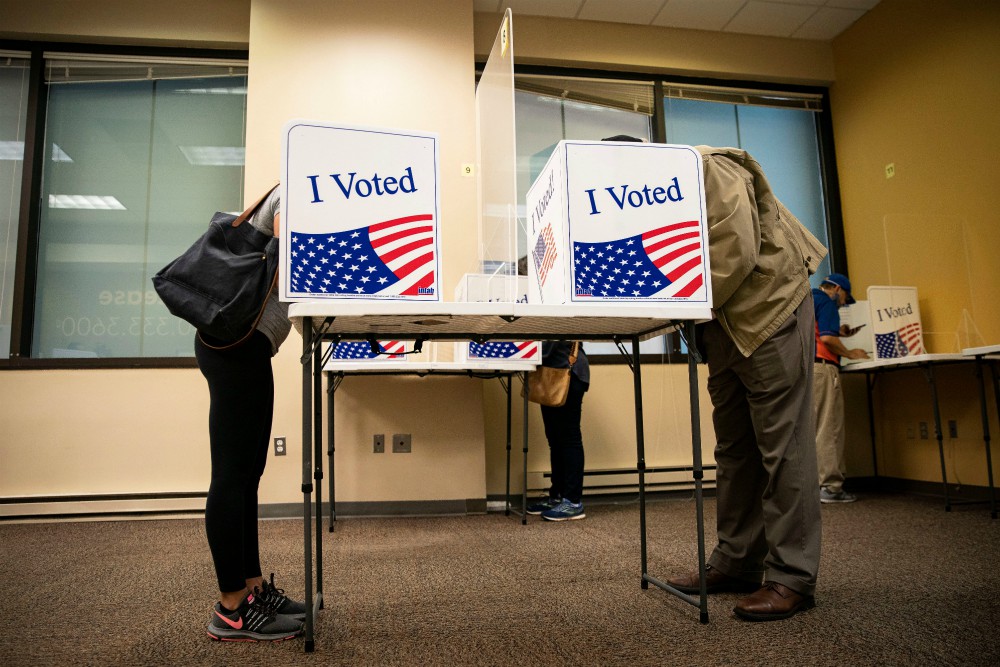 People fill out their ballots at an early voting site in Arlington, Virginia, Sept. 18. (CNS/Reuters/Al Drago)

Deciding on what are the most important issues for U.S. Catholics this election year is the central theme of a new podcast from America magazine called "Voting Catholic."

The podcast, which launched its first episode Oct. 3, is hosted by Sebastian Gomes, executive editor at America Media. Its nine 25-minute episodes will explore how Catholics are thinking about issues such as racial justice, climate change, poverty and abortion as the 2020 election approaches.

The final episode will feature an interview with Bishop Robert McElroy of San Diego on "how to vote Catholic."

The first episode traces changes in the Catholic vote since the 1960 election of John F. Kennedy, the nation's only Catholic president. It asks the question, "What happened to the Catholic vote?" And it explores the divisions between white and Latino Catholics, as well as between lay Catholics and the church's official teachings.

Often, these distinctions are chalked up to differences in priorities, said Gomes' guest, Gregory Smith, associate director of research at the Pew Research Center. But looking at polling data — for instance, the fact that more than half of U.S. Catholics support legal abortion in many cases — it's clear that this isn't necessarily the whole story.

"If prioritizing is what's important, that kind of assumes Catholics share the same fundamental attitudes about issues like abortion or immigration, or climate change, or you name it," Smith said. "But that's just not the case. Catholics, on issue after issue after issue, simply disagree with the position that church leaders might take."

In the rest of the podcast's episodes, Gomes and guests will delve deeper into these issues.

"We live in an era when neither of the two major political parties aligns completely with Catholic teaching," Gomes said in the podcast's first episode. "But even if there were such a party … Catholics don't always vote according to church teaching. So how will the 50 million Catholics eligible to vote shape the election?"

The podcast is available for listening on America magazine's website, or on Apple Podcasts, Spotify and Google Podcasts.