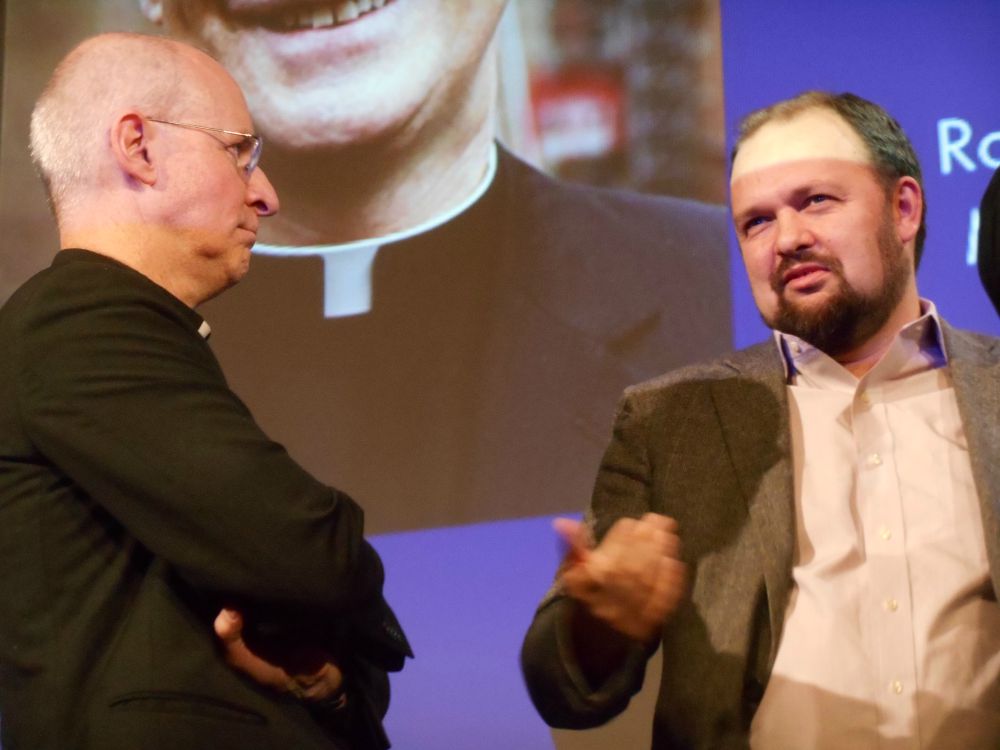 Two titans of theological public discourse came together in front of a packed house at the Sheen Center here Dec. 13. There was no smackdown.

While they disagreed, they were civil. In fact, Jesuit Fr. James Martin and New York Times columnist Ross Douthat were downright friendly. Which was the point.

The two discussed how theological argument can be made in the public sphere — including the troll-filled and nastier precincts of social media — in a way that sheds light and not so much heat.

The goal was to help create "the conditions where real argument is possible," said Jesuit Fr. Matthew Malone, editor of America Magazine and moderator for the occasion. The event was titled "Civility in America" with the focus on religion, particularly contemporary Catholicism.

Malone set the tone by stating there is "a lot of shouting" in theological discussions that frequently mirror the cantankerous tone of American politics. "But there isn't a lot of argument in the strict sense of the word."

Douthat and Martin have participated in online discussions and public writings where they have disagreed on where the church is headed, particularly about the impact of Pope Francis. Douthat, a conservative voice in the Times opinion pages, has argued that the pope has encouraged an overly-loose interpretation of Catholic doctrine, particularly in his outreach to divorced and remarried Catholics.

Martin, through books, articles and social media, regularly makes the point that the pope is simply offering the Gospel message of mercy and reconciliation while holding fast to Catholic tradition when it comes to volatile issues about marriage, divorce and the status of gay Catholics.

Douthat argued that there is a place in the public square for feisty debate over important issues.

"There is room for a polemical edge," he said, noting that he sees his job as a counterweight, support for conservatives in the mostly liberal precincts of the Times' opinion pages. That counterweight includes encouraging those who seek a champion for traditional views.

That polemical edge — which in his case has included recent columns taking Pope Francis to task for his Amoris Laetitia views on family life and for a less-than-sanguine reflection on recently-deceased Playboy founder Hugh Hefner — is a way, he said, "to argue your way to the truth."

Martin said his role is different.

As a Jesuit priest, he sees his role in the public sphere as much akin to that of a homilist. He said he tries to reflect the Gospels and church teaching in what he says and writes, noting that can be controversial.

When he writes on refugee policy, said Martin, it is with the sense of the biblical message that the stranger should be welcomed. That has political implications in the current climate, but he said the goal is not to transform political affiliations but to get Catholics to reflect maturely on their faith.

He sees his role as one that "comforts the afflicted and afflicts the comfortable" as a part of his Jesuit ministry. While his role is not to enter the partisan political fray, "if I tweet something out that has political implications, that does not bother me."

It's the arguments that garner attention, said Martin. He noted that his recent book, Building a Bridge, was comprised of two parts, one a reflection on the need for dialogue with gay Catholics and the other on prayer. Attention has focused almost exclusively on the former, he said.

Douthat, the journalistic polemicist, argued that sometimes his role "is to enrage those who always argue with you."

How do you know if you've gone too far? Malone asked.

For Martin, his rules include not writing or tweeting when angry, not attacking people personally, and only communicating on topics that he knows something about.

Still, he said, his social media and other messages can stoke anger. "I can say that Jesus Christ is the Son of God. I would get hate tweets asking why I didn't like the Holy Spirit," he said.

Douthat noted that his views on isolated topics — such as the indissolubility of marriage — is tied to a larger world view, connected to his vision of Catholic faith. Martin said he prefers to avoid wide-scale polemics, and to write more in the form of parables that challenge his audience to engage the Gospels.

Both commentators agreed that Francis has presided over an era of theological ferment in the church.

For Douthat, the pope has often gone too far.

"What can change, and what can't?" Douthat said is the biggest issue in the church today as theologians and others ponder how far doctrine can be transformed. He said that Catholicism is in danger of losing its ethical moorings by embracing a stance on moral issues more akin to the Episcopal Church than the stricter line of previous popes.

He said that those who want changes in the church have embraced a kind of subservience to papal views, which he described as a caricature of the worse kind of Protestant stereotypes about Catholics.

Both Martin and Douthat agreed that opposing parties in the church have now crossed paths about loyalty to the papacy, with those seeking change embracing Francis while traditionalists now regularly questioning the pope in ways never considered about his predecessors.

For Martin, the pope has encouraged discussion of topics that were previously considered off-base. This has brought intra-church discussion into the open, creating a sense of upheaval in some church circles.

Malone noted that despite divisions, Catholics remained united by a common worldview which recognizes the deep demands of the Gospel. "There are no good Catholics," Malone said, quoting a New York politician from the 1960s. "There are only Catholics trying to do good."

As the program ended, Douthat and Martin could be seen still on stage, in an animated discussion. For the two titans of theological discourse, the discussion is sure to continue.