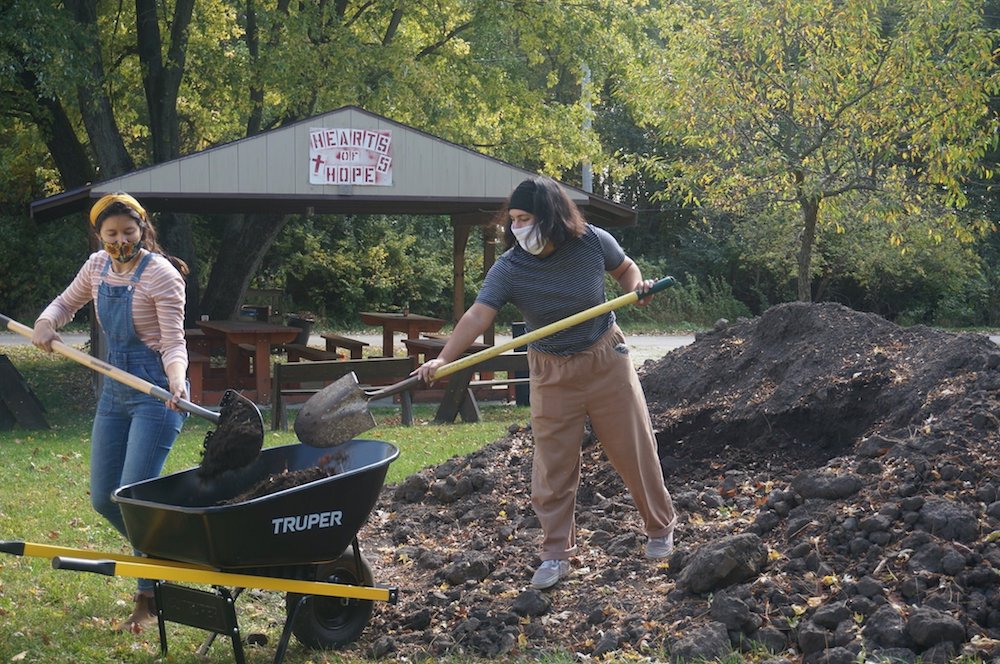 Two women work on a garden at Sacred Heart Parish Mission in the Diocese of Joliet, Illinois. The food grown will be distributed to people in need of food assistance. (CNS photo/courtesy Diocese of Joliet)

The sixth anniversary of Pope Francis' encyclical "Laudato Si', on Care for Our Common Home" is coming up, and on Sunday the Vatican will kick off Laudato Si' Week, with 10 days of events to mark the occasion.

The extraordinary encyclical was issued ahead of a key climate summit in 2015 — the one that gave us the Paris Agreement — and contained a very detailed section about climate change. But its deeper and most abiding message is about interconnectedness, especially the relationship between humans and the rest of creation. Francis explores this in depth in the encyclical's fourth chapter, titled "Integral Ecology":

Ecology studies the relationship between living organisms and the environment in which they develop. This necessarily entails reflection and debate about the conditions required for the life and survival of society, and the honesty needed to question certain models of development, production and consumption. It cannot be emphasized enough how everything is interconnected. Time and space are not independent of one another, and not even atoms or subatomic particles can be considered in isolation. Just as the different aspects of the planet — physical, chemical and biological — are interrelated, so too living species are part of a network which we will never fully explore and understand.

Several pieces of recent news bring home the urgency of this message.

First, the U.S. Environmental Protection Agency has restored and updated climate change information that was scrubbed from its website during the Trump administration. The new data show that the steady increase in average global temperatures is affecting the health, safety and welfare of people in the U.S.

In case there's any doubt, a heading on the main page of the renewed, user-friendly site reads, "Climate change is happening now."

"Social problems must be addressed by community networks and not simply by the sum of individual good deeds. … The ecological conversion needed to bring about lasting change is also a community conversion" — Pope Francis, Laudato Si'

Average temperatures in the U.S. have been rising since the beginning of the last century, and the rate has increased over the past three decades. That is exacerbating drought and wildfires, and rising sea levels related to global warming are making coastal flooding worse. Insects that carry diseases like West Nile virus are moving into new areas, and warmer river temperatures could affect aquatic wildlife, like spawning salmon.

Heat waves hit cities especially hard, and eight out of 10 people in the U.S. live in urban areas. Among the most vulnerable are elderly people and babies, and low-income families who lack air conditioning and often live in treeless "heat islands." In coastal cities, those problems are increasingly likely to be accompanied by severe storms and flooding.

The good news is that many cities have continued to pursue green goals, despite the federal government's backpedaling under former President Donald Trump.

Nevertheless, a report released this week by the nonprofit CDP, which tracks climate-related information provided by cities and corporations, shows that although 93% of 812 reporting cities worldwide are aware of the risks they face from climate change, 41% still lack risk assessments — the crucial first step toward planning.

Why bring this up right now?

Laudato Si' Week starts on Sunday, launching, as NCR environment correspondent Brian Roewe writes, "what organizers hope will mark the beginning of a major movement within the global Catholic Church to turn the encyclical's message about preserving creation into actions to create a more sustainable world for all."

On May 25, the Vatican will shine a spotlight on the Laudato Si' Action Platform, inviting all Catholics — families, parishes and dioceses, schools and universities, healthcare facilities, businesses and farms, lay movements and organizations, and religious congregations — to take specific steps toward sustainability over the next seven years. You can follow each day's events online here.

In Laudato Si', Francis reminds us that "a healthy relationship with creation is one dimension of overall personal conversion," but he goes on to say:

Nevertheless, self-improvement on the part of individuals will not by itself remedy the extremely complex situation facing our world today. Isolated individuals can lose their ability and freedom to escape the utilitarian mindset, and end up prey to an unethical consumerism bereft of social or ecological awareness. Social problems must be addressed by community networks and not simply by the sum of individual good deeds. … The ecological conversion needed to bring about lasting change is also a community conversion.

May Laudato Si' Week this year lead us to conversion, as individuals and in our communities.

Besides the Laudato Si' Week events, there are plenty of other virtual activities in the coming week that are aimed at deepening our relationship with creation.

The Center for Religion and Environment at the University of the South (Sewanee) is hosting a webinar about storytelling and wilderness, the Food and Faith Coalition will explore ways of regenerating overwhelmed ecosystems, and the Marywood Franciscan Spirituality Center offers a chance to listen to wisdom from the heart to find the commonalities among people on our diverse planet.

You can find information about these and other coming events on the EarthBeat Events page. And remember that you can add an event sponsored by your own organization or faith group.

Our heartfelt thanks again to all the EarthBeat readers who contributed to NCR's Spring Fund Drive. With your support, we exceeded our goal, and we look forward to continuing to bring you stories of faith and environmental justice.

What would you most like to see us cover in the months ahead? If there's a topic you think we're missing, please write us at earthbeat@ncronline.org and let us know.

As always, please feel free to pass along to others the link to EarthBeat Weekly on our website. Or if you prefer, you can sign up here to receive the newsletter in your inbox every Friday. Thank you for reading EarthBeat!