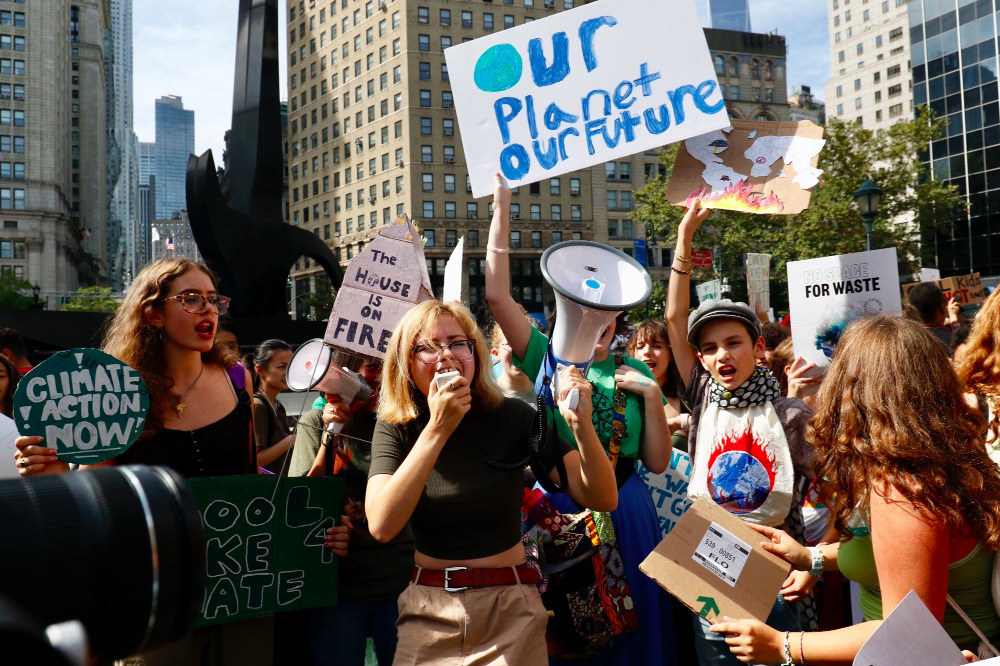 Editor's Note: EarthBeat Weekly is your weekly newsletter about faith and climate change. Below is the Sept. 25 edition, written by NCR Bertelsen interns Madeleine Davison and Lucy Grindon. To receive EarthBeat Weekly in your inbox, sign up here.

The world is burning — literally. What are young Christian voters thinking about the climate and this year's election?

NCR staff writer Brian Roewe talked to seven young climate-conscious voters from sea to shining sea to find out more. Read (and watch!) what they had to say, here on EarthBeat.

"This all sucks," said 22-year-old Ayana Albertini-Fleurant, referring to all that's happened in 2020 with COVID-19, economic collapse, racial injustice and record-setting wildfire and hurricane seasons. "But there is something that I can tangibly do this year to make a difference and to choose a different future."

That one tangible action, she said, is to vote.

This week, as part of the Covering Climate Now partnership, EarthBeat published an account from Cora Dow of how climate change has altered her home of Sitka, Alaska, so rapidly that at just 18 years old she has noticed dramatic environmental shifts there within her own lifetime. "Wherever we live, we are all affected by climate change. We all have some story to tell, and we all have a voice. And in this election, we must use it," she writes.

Working remotely as NCR's two Bertelsen interns, we have not met in person, but even 2,000 miles apart we feel connected by the visible (and even smell-able) effects of the climate crisis currently facing the United States. One of us is under evacuation warning from Los Angeles's Bobcat fire; the other is in an apartment in Chicago. But now some of the smoke from the West Coast's wildfires has darkened the sky in the Midwest and even on the East Coast. The hazy air is a tangible symbol of our interdependence.

It's never been clearer to us that the action — or, more often, inaction — of the government, corporations and individuals can have far-reaching consequences. Voting remains difficult or impossible for some eligible U.S. citizens, not to mention people with criminal records, undocumented people and children, all of whom will continue to face extreme heat, brutal hurricanes and worsening air quality as the planet keeps warming.

Those of us who care about preserving the planet, not just for the duration of our own lives and in our own cities and towns, but everywhere and for everyone, can educate ourselves about local candidates, cast our ballots and help others overcome obstacles to voting.

Beyond voting, in these dire times we can also cultivate a deeper connection with the land we live on and the people around us. Paisley Sierra's spiritual connection to the earth as an Oglala Lakota woman has fueled her passion for environmental justice. In her column for EarthBeat, the college student speaks of balancing care for the environment with care for ourselves as spiritual beings.

"The heartbeat of the Earth goes unnoticed," she writes. "But once your body, mind and spirit intertwine with hers, it's a beautiful sound that you'll never forget."

Here's more of what's new on EarthBeat this week:

How can Catholics vote their conscience on Nov. 3? A Catholic Climate Covenant webinar, "I’m Catholic, How Should I Discern? Conscience, Discernment, and Voting as an Act of Love," at 2 p.m., eastern time, on Sept. 29, will help Catholics understand the church's teaching on conscience and discernment in voting.

You can find more information and this and other events scheduled for the coming week on our Upcoming Events page.

What's at stake for the climate in the Nov. 3 presidential election? Join EarthBeat staff members Barbara Fraser and Brian Roewe on NCR's Facebook page at 1:30 p.m., central time, on Sept. 30 for an NCR EarthBeat Facebook Live conversation with Thomas Lovejoy, the biologist who coined the term "biological diversity" and who has warned that tropical forests are nearing a climate "tipping point."

How is your family, faith community or religious congregation renewing the face of the Earth during this Season of Creation? Tell us in 150 words or less in a Small Earth Story.

If you like EarthBeat Weekly, why not share it with a friend? Feel free to forward this newsletter or pass along the link to EarthBeat Weekly on our website. And if you're reading this issue of EarthBeat Weekly in your browser and would like to receive it in your inbox, you can sign up here for weekly delivery.