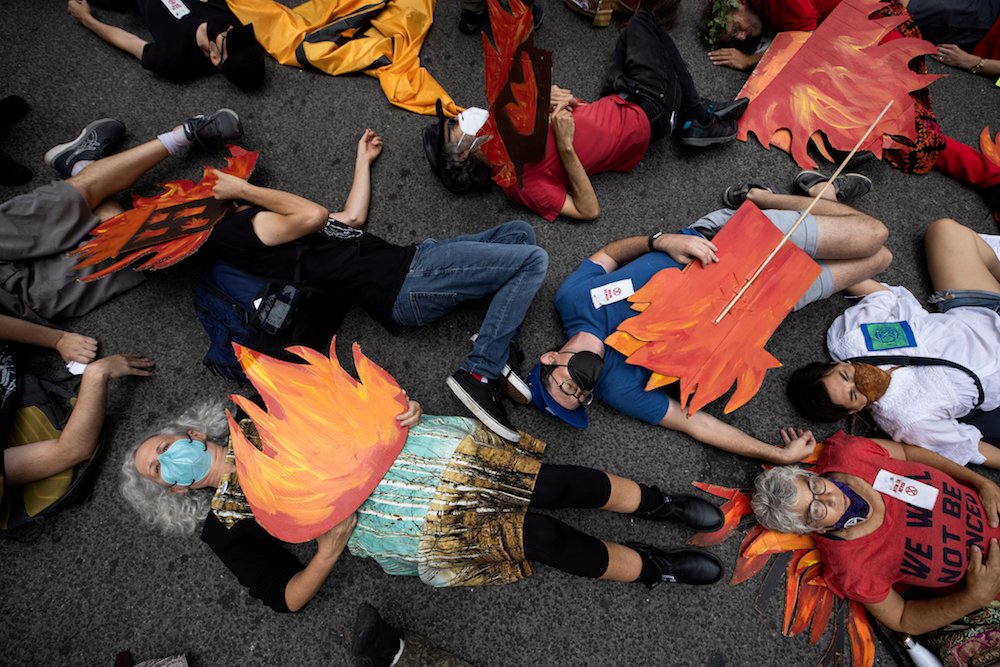 We're just five weeks away from the start of the U.N. climate conference, known as COP26, that observers call the last best chance to stave off the worst consequences of climate change. But although scientists say there is still time to keep global warming to within 1.5 degrees Celsius of pre-industrial levels, the world's nations remain far from that goal.

Most countries — including the United States, the largest historical emitter — are falling short of the action needed. And much of the U.S. ability to meet its pledges will depend on the budget legislation currently before Congress, which faces stiff resistance.

A detailed report by Inside Climate News breaks down the billion tons of greenhouse gas emission cuts at stake in the budget package, showing why the outcome of legislative tussling over the bill will be critical, not just for the U.S., but also for November's international climate negotiations.

Among other things, the bill supports a shift to renewable energy. But this video from Vox explains in six minutes how the network of transmission lines in the U.S. will need to expand to move that energy from the Midwest to urban centers, and why that could be an obstacle to rapid greening of the energy grid.

A new clean energy and climate bill signed into law in Illinois on Sept. 15 offers a window into the battles brewing over clean energy at the national level. In that debate, Democrats argued for the bill's long-term benefits, while Republicans decried the costs and critics said the measure favored energy-hungry urban areas.

The global shortfall in pledges is why young people around the world took to the streets again Sept. 24 to stage climate strikes, just days after the release of a new study showing high levels of sadness and anxiety about climate change among 16- to 25-year-olds.

And this is why faith leaders call passage of the budget bill a moral imperative, as NCR environment correspondent Brian Roewe wrote recently. In the coming weeks, EarthBeat will be delving further into what's at stake in the Glasgow negotiations — and why Catholics should care.

This week we highlighted people of faith who are speaking out and taking action on climate and other environmental issues.

Here's what we've heard from our readers:

Although EarthBeat reader Rosalind Carr was inspired by Burhans' work, she was also reminded that women's contributions are too often overlooked:

"Molly Burhans work sounds so ... I can't think of enough adjectives to laud it. BUT I will draw attention to one thing she said. 'One of the original, beautiful visions of GoodLands that we still have,' she said, 'is let's see Catholic conservation [reach] the scale of Catholic health care and education globally, as the largest global network the world has ever seen.'

"We have to remember that the health care and the education were built by the women of the church. If it hadn't been for the nuns, I seriously doubt that any of that would have come to fruition. In fact, now that the number of women entering the religious life has dwindled, Catholic health care and education are dwindling also. Catholic hospitals are being taken over by big corporations and schools are closing all over the country. ... We need a conversion of leadership."

And readers Frank and Jerry Gold found this week's "At Home in Creation" reflections to be a breath of fresh air: "What a great reminder! I am always amazed and saddened that all of us humans can't recognize our intimate connection and unity as we breathe the same air! ... Yes to life and hope!"

Thanks to our readers who take the time to let us know what we're doing well and where we're falling short. To weigh in on a story, drop us a line at earthbeat@ncronline.org.

There's lots going on this week in Catholic climate cyberspace, from a webinar about climate refugees to a guided tour of the Laudato Si' Action Platform. And on Sept. 29 at 2 p.m. Central Time, EarthBeat and Global Sisters Report will host a conversation about how women's religious communities are protecting parts of their land for future generations.

You can find more information about these and other upcoming events on the EarthBeat Events page. And you can add your own group's events here.

This week EarthBeat told stories about some inspiring Catholics who are addressing climate issues. Who has inspired you on this journey? Tell us about them in 150 words or less in a Small Earth Story.

And if you enjoy EarthBeat, please pass this link along to a friend and encourage them to subscribe to receive EarthBeat Weekly in their inbox every Friday. Thanks for reading EarthBeat!