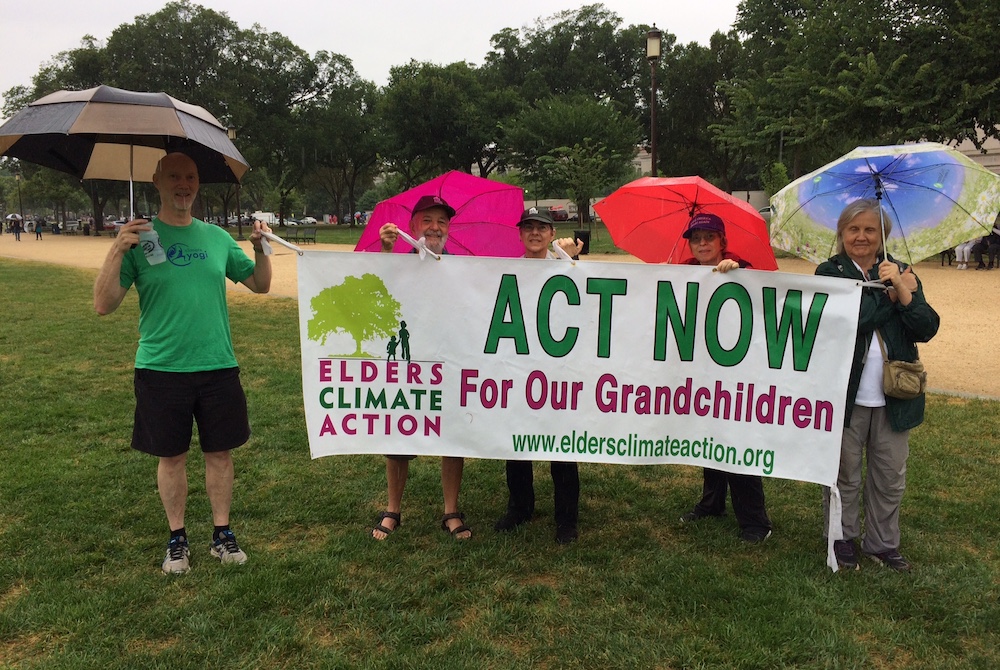 Lynne Iser's daughter was 16 years old when she told her mother she wished she'd grown up in the 1950s and 60s, as her mother had, free from existential dread about climate change.

That conversation, a decade ago, changed Iser's life.

Hearing her daughter's pessimism and fear for the future of the planet hit Iser "in the gut" and propelled her to action, she said.

"What [my daughter] was concerned about was what I knew to be true, but I wasn't taking it in the same way that she was," Iser told EarthBeat. "It sunk into me — I really need to stand with my kid."

Today, as president of the national nonprofit Elders Action Network, Iser leads a growing movement of older adults who are addressing social and environmental crises through education efforts, advocacy and activism.

Because of the prominence of Greta Thunberg and other young activists, climate activism is often portrayed as a young people's movement. But Iser, 70, and others like her believe that elders have a critical role to play in protecting the planet, and an obligation to do so for the sake of younger generations.

"As future ancestors, what do we want our legacy to be?" Iser says elders must ask themselves. "How do we want to be remembered?"

Among Elders Action Network's largest projects is Elders Climate Action, whose members, organized in 12 official chapters throughout the United States, advocate for environmental protection and encourage other elders to join in climate action.

David and Gloria Mog, 77 and 78, have been active members of the Washington, D.C.-area chapter since 2015, taking part in demonstrations like "Fire Drill Fridays," which gained national attention last year because of actor Jane Fonda's  weekly participation.

David first learned about human-caused climate change in 1984, in a conversation with Roger Revelle, one of the first scientists to study the growing impact of human actions on global temperatures. David, a chemist who was working then with the National Academy of Sciences, recognized the enormous significance of what Revelle told him.

"Holy mackerel," he recalled thinking at the time. "This is going to be the biggest challenge humanity has ever faced."

Along with attending demonstrations and meetings, the Mogs have worked for decades to inform other Catholics about climate change.

David started leading annual environmental liturgies for their lay-led Catholic community in Arlington, Virginia, in 1989, and Gloria heads the community's Care for Creation team, which was inspired by Pope Francis' encyclical, Laudato Si'. The team's goals are similar to those of Elders Climate Action: to educate people about climate change, and to offer individual and collective actions they can take to make a difference.

The Mogs have also made personal lifestyle changes for the sake of the environment, limiting their energy consumption and minimizing waste, refraining from using air conditioning and maintaining a backyard compost pile.

After starting a teaching career as a college professor, David discerned a calling to teach younger students, whom he felt were often overwhelmed by hard sciences, but who held enormous potential for innovation and brilliance. 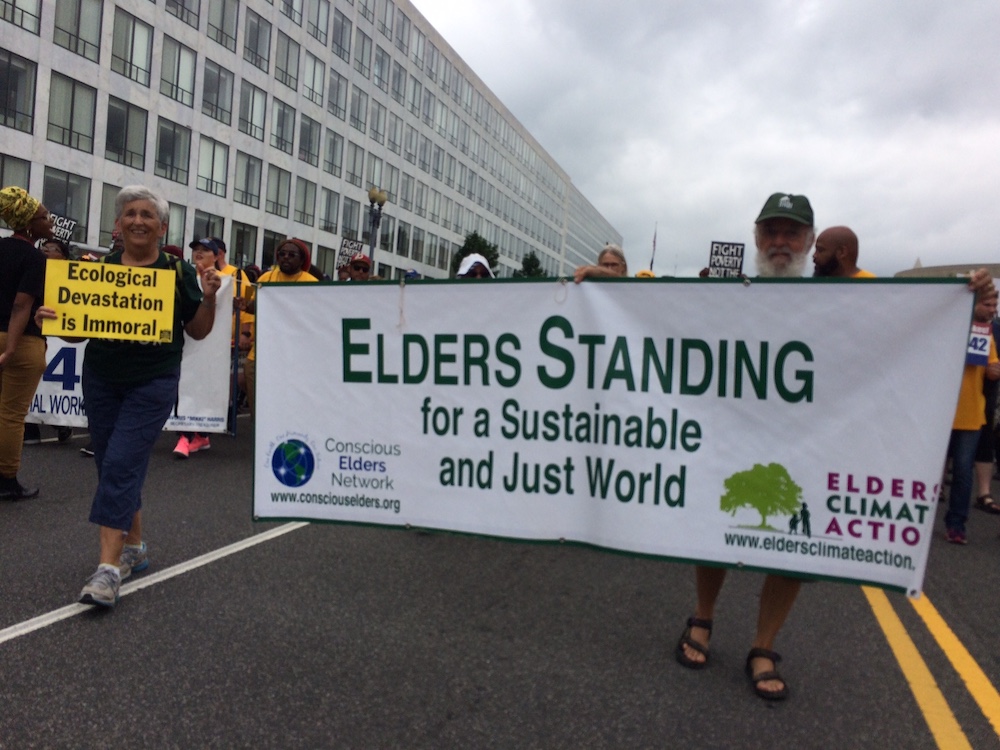 For 19 years, he biked the 15-mile daily round trip across the Potomac River to teach chemistry and physics to ninth graders at Sidwell Friends School in Washington, D.C. (He did the math — in total, his bicycle commutes over those years amounted to about 50,000 miles. As he told his students, he rode the length of the equator, twice.)

Like Iser, the Mogs say they are motivated and inspired most by their children, and by a sense of obligation to those younger than themselves. The Mogs do not have grandchildren, but many elder climate activists do.

Maxine Lobel, co-leader of Florida's Elders Climate Action chapter, said she and many of her fellow activists feel an urgent need to protect the planet for the sake of their grandchildren.

"That's the main impetus for most of us," Lobel told EarthBeat. "I feel very strongly that if we don't do something immediately, the world is just going to look very differently for them."

Spurred by April's Wisconsin primary, which was criticized for having hours-long lines and too few polling places in some cities, Lobel and other members of Elders Climate Action have been concerned that obstacles to voting may impede citizens' ability to elect leaders who will protect the environment.

Lobel noted that elders in particular may choose not to go to the polls because they face higher risk of serious illness or death if they are exposed to the coronavirus. Many elders are accustomed to voting in person, however, and some are unaware of alternatives.

Paul Dryfoos, Elders Stand for Fair Elections' national team leader, told of a man he spoke to in a Pennsylvania retirement home who did not know he could vote by mail, and who had thought 2020 would be the first election year since he turned 18 in which he would not be able to vote.

Lobel and about 40 volunteers from Florida Elders Stand for Fair Elections gather and distribute local voting information, particularly in communities where voter turnout rates have been low in the past. They partner with more than 200 other groups, including religious congregations, school districts, a farmworkers' association and a food bank, which distributed 3,000 voting information fliers in food bags. 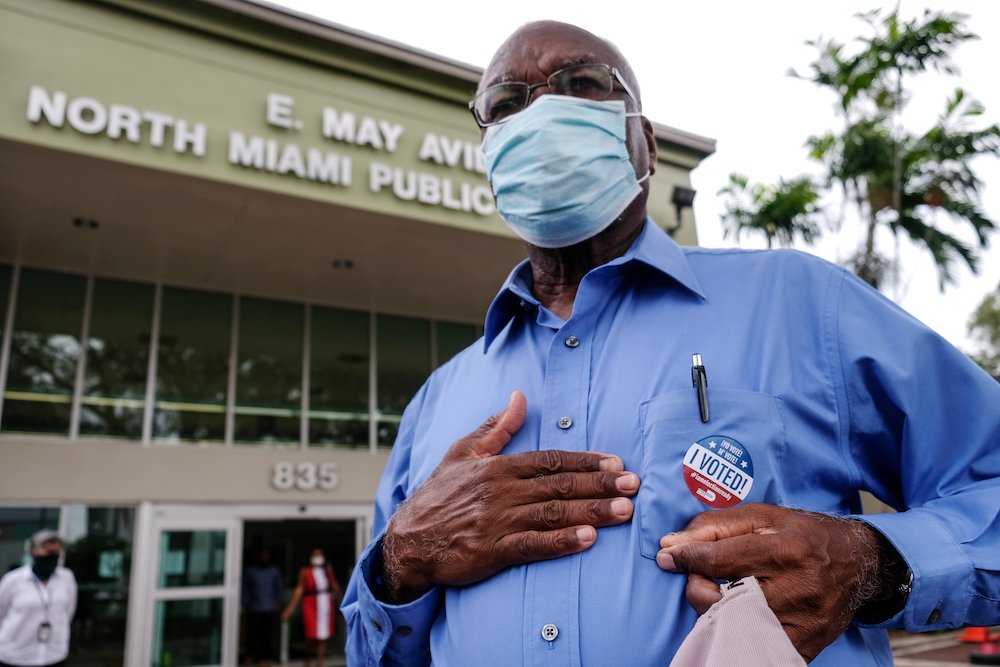 A man in Miami exits a polling station Oct. 19, as early voting began ahead of the November election. (CNS/Reuters/Maria Alejandra Cardona)

Similar efforts are under way in Pennsylvania, Arizona, New Mexico, Wisconsin and New Hampshire, where elder groups worry about the spread of inaccurate voting information or possible voter intimidation at some polling places.

"Fair elections are a prerequisite to environmental, social and economic policies and subsequent legislation that responsibly address climate change and other issues key to our society's well-being," the Elders Action Network website states.

Iser, who co-leads the Elders Stand for Fair Elections group in Pennsylvania, said her generation gained an appreciation for democracy, voting rights and activism from living through the civil rights movement and the Vietnam-war era, and they bring those values to the climate movement today.

Young climate activists "may not get the support of their parents, but they will get support from the older generation," she said.