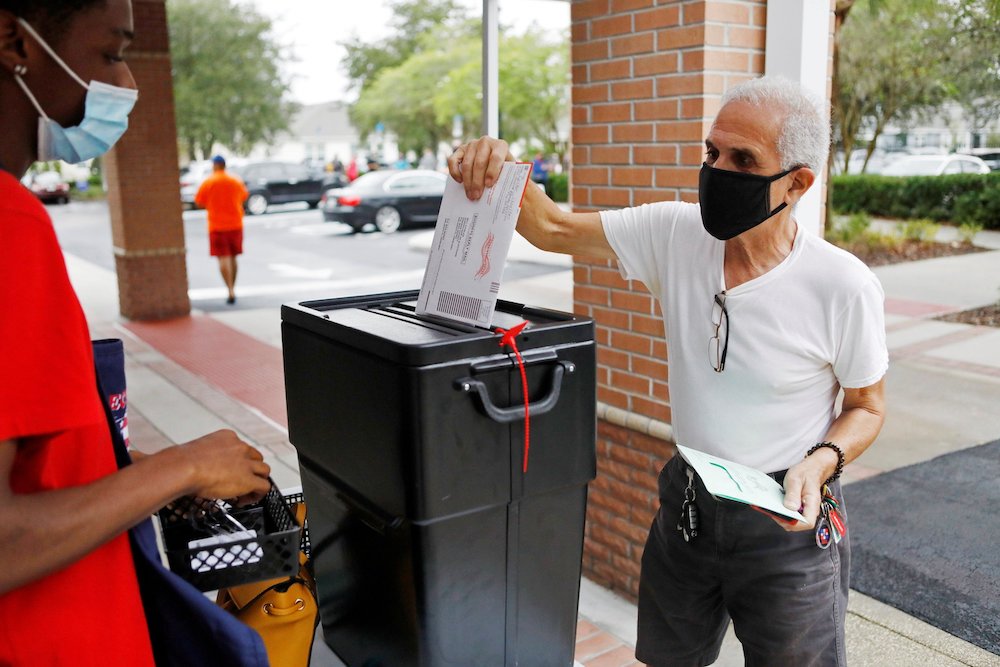 A man in Orlando, Florida, casts his mail-in ballot Oct. 19, as early voting begins ahead of the November 3 election. (CNS/Reuters/Octavio Jones)

For months now, Neddy Astudillo, a Presbyterian pastor, has doggedly worked the phones and webinars from her Tampa home, reaching out to religious congregations across Florida in an effort to get out the vote — particularly a vote that considers climate change.

It's a message Astudillo has repeated in conversations about the importance of the presidential election as part of the Compassionate Voter Campaign, an election season undertaking by the interreligious group GreenFaith — one of numerous efforts by climate-focused faith groups to mobilize religious voters to take environmental concerns with them to the ballot box.

"At every single level of government, we want to engage and make sure that people have climate at the forefront of their minds when going to the polls, and are thinking about casting their vote for the climate, and also in support of communities and especially communities that are the most impacted," said Sara Shor, GreenFaith organizing director.

The first phase of the Compassionate Voter Campaign recruited clergy and people of faith to serve as "Voting Captains" who have helped people register to vote and discuss what it means to vote with compassion and climate change in mind.

Astudillo, an eco-theologian from Venezuela and GreenFaith's Florida organizer, has focused most of her outreach in that critical battleground state on Latino and other minority religious communities.

She calls voting "a sacred act," saying it presents the opportunity to act on faith-based directives to care for creation and for neighbors — and to mend relationships with both.

She also stresses education around climate change. Most Latinos do not deny that climate change is happening, she says, but they express a sense of helplessness about addressing it. One solution, she suggests, is the vote.

"That's really the conversation that we try to have with people. And make them realize that they have power in their hands, and we're trying to come together as a collective power to effect change and to change our system so that the world can stay beautiful and heal, and future generations can enjoy it as much as some of us have," Astudillo said.

Outside of Florida, the Compassionate Voter campaign has organizers on the ground in New Jersey, North Carolina and South Carolina.

Along with activating voters, GreenFaith has recruited 100 "Moral Observers," clergy and people of faith trained to identify and respond to voter suppression before Election Day and at the polls. The program is part of a wider Election Defenders coalition working to defend voters' rights.

Shor said faith leaders have a long history of fighting for the right to vote, and the campaign also highlights the connections between voter suppression and climate justice.

"The same communities that have been targeted across this country and have their votes suppressed are communities of color, young communities and poor communities. And those are sort of the same populations that are the most affected by climate change and climate disasters," she said.

At least a half dozen religious campaigns have homed in on climate change ahead of the election, including Interfaith Power & Light, Catholic Climate Covenant, Franciscan Action Network and the Ignatian Solidarity Network.

The mobilization comes as climate change and the environment have gained traction as issues important to voters, including religious communities.

A new poll released Thursday found wide majorities of voters across faith denominations viewing an important priority for the next president and Congress to pass comprehensive climate legislation, with nearly 4 in 10 voters overall calling it a top priority. Nearly two-thirds of all voters strongly or somewhat support the Green New Deal, with popularity highest among Black Protestants (37% strongly support; 33% somewhat support), nonwhite Catholics (44%; 30%), and Jewish people (38%; 30%).

The survey was conducted Oct. 13 by Climate Nexus and the Yale University and George Mason University programs on climate change communication. It has a margin of error of 2.4 percentage points.

Other polls this election cycle, however, have shown mixed responses from voters on climate change and the environment. 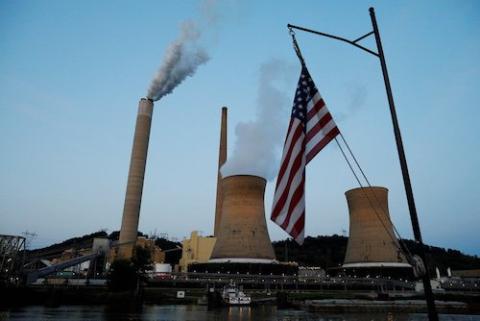 A coal-fired power-plant is seen along the Ohio River in Moundsville, West Virginia, in 2017 (CNS/Reuters/Brian Snyder)

A Pew Research Center survey in the summer showed 42% of voters saying climate change would be a very important issue in determining their support for a presidential candidate. Nevertheless, the topic ranked 11th out of 12 issues, above only abortion. A September NPR/PBS NewsHour/Marist poll, in contrast, found climate change ranking behind only the economy and coronavirus for likely voters, primarily among those identifying as Democrats.

But that interest hasn't always translated into votes.

The nonpartisan Environmental Voter Project estimated that half of environmentalists, or 10 million people, did not vote in the 2016 presidential election. "In short, we have a turnout problem, not a persuasion problem," it concluded.

"People who care about the environment, we know, are many people of faith," she told EarthBeat. "And these are people who have in effect thrown their hands up and said government's not going to do anything. So we need to make people understand that they can make a difference and their voice can be heard."

That was a main driver behind IPL's Faith Climate Justice Voter Campaign. Building off momentum from its annual Faith Climate Action Week — where 2,000 congregations participated in events around Earth Day — the election project has sought to educate and activate religious voters around their faith tradition's teaching on caring for creation.

IPL also teamed with Faith in Public Life to create a voter guide for religious voters that underscores climate justice. It says the U.S. has a unique moral responsibility, as historically the globe's leading source of greenhouse gas emissions, to adopt clean energy and help other countries mitigate and adapt to climate change.

Approximately 6,000 people have signed the project's Faith Climate Justice Voter pledge — a figure, Stephenson said, that's been impacted considerably by the coronavirus pandemic, as the cancellation of worship services has made it difficult for organizers to engage people directly.

Along with voter registration, IPL has worked to ensure that people actually vote, whether by mail or in person. It partnered with the Yale Climate Communication program to pair its Six Americas study with public voter files to identify people of faith who have a low voting track record and who fit into the "climate alarmed" category — the 26% of Americans most worried about global warming and most supportive of solutions.

IPL has targeted its outreach, which has included text-banking drives to reach out to masses of voters, in seven mostly battleground states: Arizona, Michigan, Minnesota, New Hampshire, North Carolina, Virginia and Wisconsin.

"We wanted to make sure that people in our community and our congregations were indeed voting and were bringing their values to the polls. And, of course, central to those values for us is care for creation," Stephenson said.

Voters in Boston wait to cast their ballots near Fenway Park on the first day of early voting Oct. 17. (CNS/Reuters/Brian Snyder)

In La Crosse, Wisconsin, Franciscan Sr. Lucy Slinger is among those who signed the pledge. She's encouraged other members of her congregation, the Franciscan Sisters of Perpetual Adoration, to do so, too.

"Everybody needs to encourage at least four or five other people that are hesitant about voting to make sure that they do this time," she told EarthBeat.

"I believe very firmly that we have to make a major, major change in the U.S., in terms of carbon sequestering," she said. Slinger fears that if progress is not made by 2030 — a critical marker, climate scientists say, for halving emissions to keep the planet from warming by more than 1.5 degrees Celsius — rising temperatures will make the planet increasingly inhospitable for human life.

The Franciscan Sisters of Perpetual Adoration are among the Catholic communities that have also participated in the Vote Franciscan Values campaign of the Franciscan Action Network.

The campaign has highlighted three issues important for Catholics to consider ahead of the election: morality in government, compassion at the border and care for creation. On creation, it says, "the climate, our world, is in an emergency state," and highlights Catholic teaching on stewardship and the relationship between humans and the environment of which they're a part.

"We can vote for elected officials that represent common-sense environmental policy at home and abroad," a campaign video states.

Stephen Schneck, Franciscan Action Network executive director, said the campaign hopes to encourage Catholics to vote, "particularly Catholics who may be feeling put off by the really corrosive political atmosphere out there." The campaign has held about a dozen engagement sessions with Franciscan communities across the country, including Philadelphia and Clinton, Iowa.

"That's what we're really hoping for, educate people about the importance of these issues — let's not forget them when we go to the voting booth. And secondly, please do vote because so much depends on our vote," Schneck said.

Other Catholic groups have also sought to mobilize their members and fellow parishioners.

Like IPL and GreenFaith, Catholic Climate Covenant invited Catholics to sign onto their Vote with Love in Action pledge and commit to consider the fullness of Catholic social teaching, including its directives around creation, when they vote. The covenant also hosted a series of webinars on Catholic social teaching and voting, including one in which Bishop John Stowe of Lexington, Kentucky, urged Catholics to avoid single-issue voting and weigh issues like the environment.

The Ignatian Solidarity Network included its own ecology voting guide as part of its Voting is an Act of Love project. At one point it states:

As people of faith, we seek elected officials who prioritize meaningful legislation that creates a just and immediate transition away from fossil fuels, centers frontline and vulnerable communities affected by environmental degradation and climate change, increases environmental oversight on new infrastructure projects, as well as legislation that addresses the connections between issues of climate change, global health, racial injustice, and migration.

In discussions, Astudillo, the GreenFaith organizer in Florida, invites people to consider that while voting is a personal right, how their vote impacts the lives of other people today and in the future, in this country and elsewhere in the world. The coronavirus pandemic, she added, has shown how a crisis in one part of the world can quickly overtake the entire globe.

"COVID started on the other side of the world; well, guess what? Within just a little bit of time, we're all suffering from the same pandemic. And the same thing with climate change," Astudillo said.

As signs of climate change become more evident, the need for bold climate policies only grows, said Shor of GreenFaith. And who is elected will likely determine how bold those policies can go.

"We're just increasingly seeing the need to engage with the electoral process in order to win major victories. And that that's one piece of the fight but not the whole thing." Shor said.